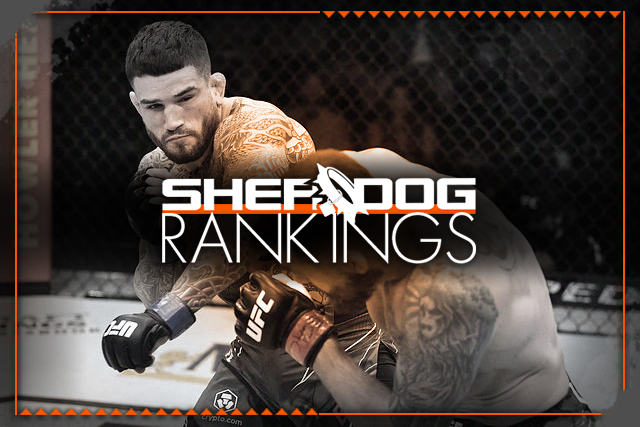 By taking a decision victory against Michael Chiesa in the UFC Fight Night 198 co-main event, Brady enters Sherdog.com's divisional rankings at No. 8 — dropping “Maverick” down one spot from his previous position. Brady’s sparkling 15-0 record is undeniably impressive, and it will be interesting to see how he fares as he continues his climb through the division.

Elsewhere, Ketlen Vieira added a significant feather to her cap with a unanimous decision triumph over Miesha Tate in the UFC Fight Night 198 headliner. While the victory keeps the Brazilian in the title discussion, it isn’t enough to improve her ranking, as she remains firmly entrenched at No. 7 behind the woman who defeated her in February, Yana Kunitskaya.

On the same card, surging prospect Taila Santos made a sizable leap at flyweight on the back of a first-round submission of the previously-10th ranked Joanne Wood. Santos, who has won four straight in UFC competition, debuts in the 125-pound Top 10 at No. 8.

And finally, Rena Kubota made her presence known at atomweight once again, as she survived the wrestling assault of Miyuu Yamamoto for a round-plus at Rizin 32, getting much the worse of the action, before turning things around with a pinpoint intercepting knee to set up a come-from-behind TKO finish. The Bellator MMA veteran and Shoot Boxing champ re-enters the atomweight rankings at No. 6.