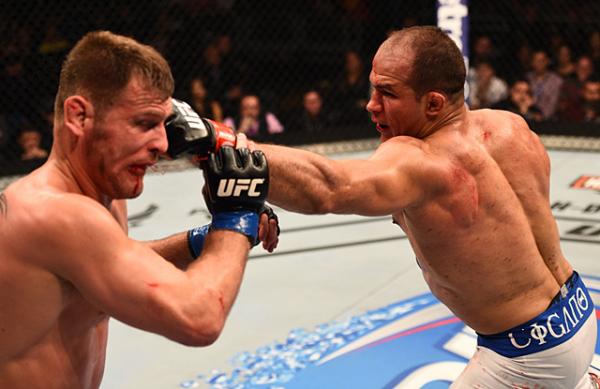 Junior dos Santos walked away with the win at UFC on Fox 13. | Photo: Josh Hedges/UFC/Zuffa/Getty


It was a big weekend for fighters in the heaviest and lightest weight classes of the Ultimate Fighting Championship, as well as a few in between.

The heavyweight main event of UFC on Fox 13 saw former champion Junior dos Santos and rising star Stipe Miocic trade blows and momentum for 25 minutes in a punishing, back-and-forth affair. Though his bruised and bloodied face may not have shown it, dos Santos emerged victorious in a narrow but unanimous decision after taking control of the bout’s latter rounds. With the win, “Cigano” maintains his hold on the division’s No. 2 spot, while Miocic’s gritty showing keeps him at No. 6.

Another of the card’s notable heavyweight matchups saw Matt Mitrione punch out onetime title contender Gabriel Gonzaga in just under two minutes, landing “Meathead” a spot on the list of divisional contenders.

On the opposite end of the scale, Carla Esparza became the first UFC strawweight champion and the winner of “The Ultimate Fighter” Season 20 by submitting the less-experienced Rose Namajunas with a third-round rear-naked choke. Esparza sits at No. 2 in our inaugural women’s 115-pound rankings, behind only World Series of Fighting champion Jessica Aguilar, who outpointed “Cookie Monster” in a 2011 meeting under the Bellator MMA banner.

In other action, No.4 lightweight Rafael dos Anjos made a significant statement with a lopsided decision win over Nate Diaz, who falls from the 155-pound top 10, making way for unbeaten Myles Jury.

Meanwhile, WSOF welterweight titlist Rousimar Palhares joins the list of 170-pound contenders after earning the most significant win of his post-UFC career: a savage kneebar submission of Jon Fitch in the main event of WSOF 16.

Finally, after one year of inactivity and with no upcoming fight scheduled, No. 7 bantamweight Michael McDonald has been removed from the rankings. With his exit, Takeya Mizugaki, Marlon Moraes and Joe Warren all move up one spot, and former Bellator champion Eduardo Dantas re-enters the list at No. 10.