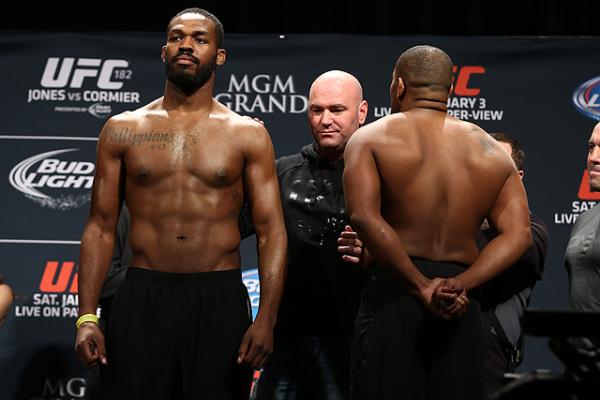 Jon Jones lost a rare round to Daniel Cormier at UFC 182, but “Bones” kept what mattered most: his UFC light heavyweight title and his seat atop the 205-pound rankings.

In his record eighth consecutive title defense, Jones fought through some strong early rounds from Cormier to outwork and, in the champ’s words, “out-grind” the “King of the Grind.” The win keeps Jones in rarefied air atop both the light heavyweight and pound-for-pound top 10, while Cormier maintains his No. 3 spot after giving Jones as tough a fight as any of his previous challengers, save Alexander Gustafsson.

Also at UFC 182, No. 5 lightweight Donald Cerrone held onto his spot by spanking previously unbeaten Myles Jury in a co-main event which proved anything but competitive. The unanimous nod gave Cerrone his sixth straight win, including a 5-0 run in his busy 2014 campaign. With champion Anthony Pettis set to defend his belt against Rafael dos Anjos in March, a title shot does not seem to be in Cerrone’s immediate future. That does not seem to bother the “Cowboy,” who asked post-fight to be slotted on the UFC’s Feb. 14 card in Colorado.

Hector Lombard climbs one spot to No. 5 in the welterweight rankings, moving past the inactive Carlos Condit thanks to a hard-hitting, one-sided decision win against the returning Josh Burkman.

Budding flyweight star Kyoji Horiguchi kept his hot streak going with a unanimous decision against Louis Gaudinot, moving the Krazy Bee prospect to No. 8 in the 125-pound top 10. Another Japanese flyweight, Yuki Motoya, enters the list of contenders thanks to his New Year’s Eve knockout of former Resurrection Fighting Alliance titlist Matt Manzanares.

Lastly, after one year of inactivity and with no upcoming fight scheduled, Josh Barnett has been removed from the heavyweight rankings. Barnett’s exit makes room for Bellator champion Vitaly Minakov at No. 10, while Minakov is replaced on the list of contenders by Ben Rothwell.