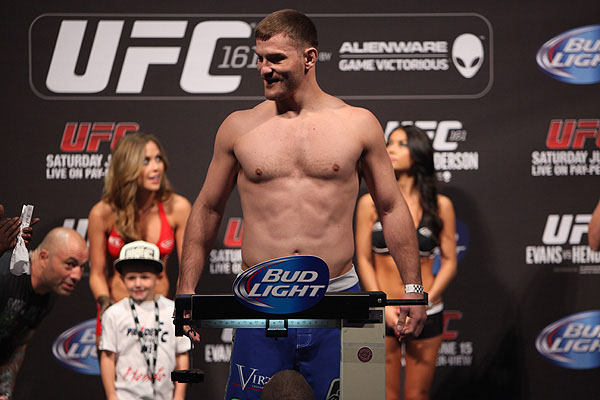 The main event of UFC Fight Night “Hunt vs. Miocic” served as confirmation that Stipe Miocic is still a heavyweight on the rise.

The 32-year-old Ohioan demolished heavy-handed kickboxer Mark Hunt on May 10 in a bout which was at times hard to watch, as Miocic put a prolonged beating on “The Super Samoan” before earning a merciful referee stoppage in the fifth and final frame.

The victory was Miocic’s fourth in five outings and saw him rebound from a hard-fought December decision loss to former titlist Junior dos Santos. As for Hunt, the years finally appear to be catching up to the former K-1 World Grand Prix champion, who offered little resistance in suffering his second consecutive loss. Miocic takes the No. 5 position in the heavyweight top 10, while Hunt drops to No. 6.

The list of heavyweight contenders also saw a shift, as M-1 Challenge champion Marcin Tybura was displaced by Germany’s Stephan Puetz, who halted Tybura in the third round of their clash at M-1 Challenge 57.

Lastly, lightweight ranker Khabib Nurmagomedov has been removed from his No. 3 spot due to one year of inactivity. Nurmagomedov, who last entered the cage in April 2014, was forced out of his UFC 187 bout against Donald Cerrone after suffering a knee injury. As a result, all lightweights previously ranked below him move up one spot, while hot prospect Beneil Dariush enters the list at No. 10. World Series of Fighting champion Justin Gaethje takes the spot vacated by Dariush on the list of 155-pound contenders.