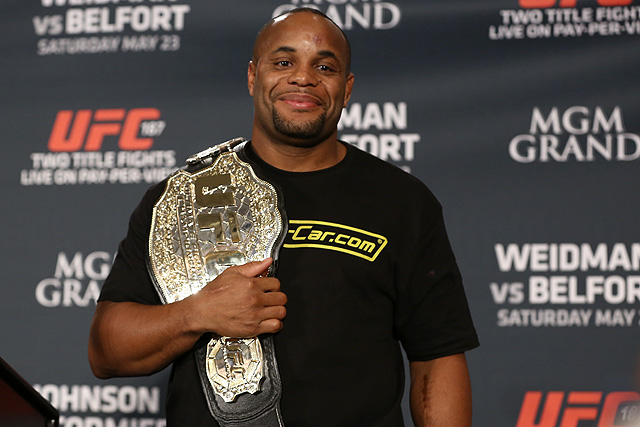 UFC 187 featured a wealth of talent which altered the rankings in several divisions.

Perhaps most notable was light heavyweight, where a new king was crowned following the fall of former ruler Jon Jones. Questions marks will undoubtedly surround new champion Daniel Cormier’s reign for as long as Jones remains away from the Octagon, but there was no questioning the manner in which “DC” seized the title on May 23. After enduring an early hailstorm from Anthony Johnson, the “King of the Grind” proved his name by bringing Johnson to the floor and wearing him down for a third-round submission win. The victory propels Cormier to the No. 2 spot in the 205-pound rankings, while Johnson drops one spot to No. 3.

The show’s co-headliner saw Chris Weidman affirm his position as the world’s top middleweight by defending his UFC belt against Vitor Belfort. In a long-delayed duel, Weidman made quick work of the Brazilian with punches on the ground, taking out “The Phenom” in under three minutes. Owing to the loss and the 17-month absence which preceded it, Belfort falls two places to the No. 5 spot.

A quartet of top-10 flyweights saw action, all of whom remain ranked in their same spots: Joseph Benavidez (No. 2) took a ground-based unanimous decision against John Moraga (No. 7), and John Dodson (No. 3) returned from a knee injury-induced layoff with a unanimous nod over Zach Makovsky (No. 6).

In other action, lightweight contender Donald Cerrone won his eighth straight and kept his No. 3 ranking with a second-round stoppage of late replacement John Makdessi, while former UFC champion Andrei Arlovski rose two spots to No. 5 in the heavyweight top 10 by punching out Travis Browne, who drops two places to No. 6.