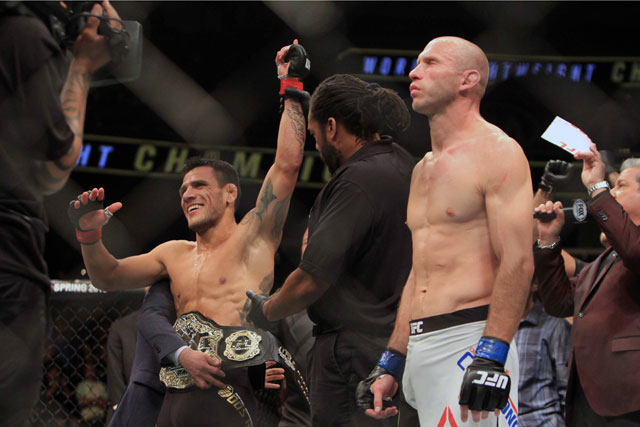 One week after the UFC featherweight and middleweight divisions were on display in Las Vegas, the lightweights took center stage in Orlando, Florida, for UFC on Fox 17.

Rafael dos Anjos capitalized on his moment in the spotlight, as the 155-pound champion needed only 66 seconds to beat the title dreams out of Donald Cerrone before a national audience. Dos Anjos, who took the belt from Anthony Pettis in a March upset, has looked unstoppable in his last five fights and is quickly making a name for himself as one of the finest pound-for-pound fighters in the world. The champ retains his No. 1 ranking in the lightweight division with this update, while Cerrone remains at No. 3 thanks to the sensational eight-fight winning streak which earned him the title shot.

On the same card, Nate Diaz put on a show in his three-round duel with Michael Johnson, picking apart and taunting the Blackzilians representative for the better part of 15 minutes. Diaz’s long range and relentless boxing carried him to a unanimous decision and may have put him in line for a bout with new featherweight champ Conor McGregor, who has expressed interest in moving up a weight class. For now, Diaz joins the list of lightweight contenders, as does the previously eighth-ranked Johnson. With the “Menace” falling outside of the rankings, Evan Dunham moves in to the vacant No. 10 position.

The biggest rankings jump of the week came from Alistair Overeem, who ended his tepid heavyweight bout against Junior dos Santos in the blink of an eye with a left hook late in the second round. “The ‘Reem” vaults six places to the No. 3 spot previously held by dos Santos, who falls one place to No. 4.

In other activity: Unbeaten strawweight Karolina Kowalkiewicz bested Randa Markos across three rounds, moving Kowalkiewicz up to No. 4 in the 115-pound rankings, above the inactive Carla Esparza; the women’s bantamweight division has a new threat in Valentina Shevchenko, who joins the rankings at No. 8 after a decision win against Sarah Kaufman; and Mirsad Bektic joins the list of featherweight contenders, replacing Nik Lentz, who has moved to lightweight.