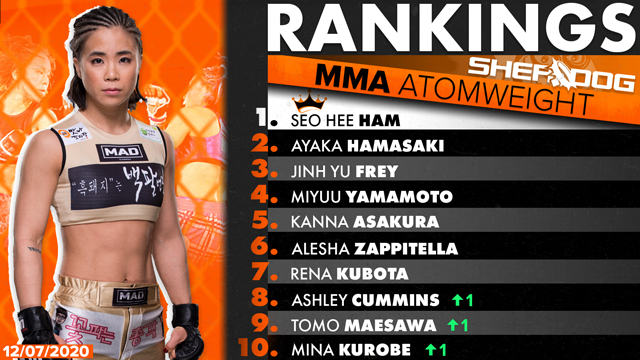 The third time proved to be a charm for Ham at Rizin 20, as she edged rival Ayaka Hamasaki via split decision to claim the Japanese promotion’s super atomweight crown. Ham has now won six consecutive bouts while competing in both Rizin and Road FC, where she also holds a title. Ham has vacated the Rizin title to reportedly sign with One Championship.

After falling to Seo Hee Ham in an atomweight title bout on New Year’s Eve, Hamasaki returned to form with a second-round submission of Tomo Maesawa in a strawweight contest at Rizin 22 on Aug. 9. The former Rizin and Invicta titlist has won six of seven bouts in the Japanese promotion and will square off with Miyuu Yamamoto for the vacant atomweight crown at Rizin 26.

Frey’s second strawweight foray ended in disappointment at UFC on ESPN 16, as she dropped a unanimous verdict to Konklak Suphisara on Oct. 3. It’s been a rough year so far for the 35-year-old Frey, who was stripped of her Invicta FC atomweight title after failing to make weight prior to a victory over Ashley Cummins in February and lost her Octagon debut to Kay Hansen via armbar on June 27.

Yamamoto returned to the win column at Rizin 20, as she earned a clear-cut unanimous decision triumph over Suwanan Boonsorn at Saitama Super Arena in Saitama, Japan, on New Year’s Eve. The 45-year-old Krazy Bee representative bounced back from a second-round TKO loss to Seo Hee Ham at Rizin 19 and has won five of her last six appearances within the Japanese promotion. She’ll get a chance to vie for the vacant atomweight belt when she meets Ayaka Hamasaki at Rizin 26.

Asakura was dominant at Rizin 22, scoring a technical knockout victory against Mizuki Furuse at the 1:35 mark of the opening round of their bout in Yokohama, Japan, on Aug. 9. The Paraestra Matsudo representative has put together a three-bout winning streak after dropping a surprise decision to Miyuu Yamamoto at Rizin 16 in June 2019. Asakura will return to action against Ai Shimizu at Rizin 26 on Dec. 31.

Zappitella weathered some early adversity to claim the vacant atomweight throne at Invicta Fighting Championships 42, as she imposed her will through her grappling to submit Ashley Cummins with a fourth-round shoulder choke in Kansas City on Sept. 17. The Scorpion Fighting System product has now won five of her six appearances within the all-female promotion.

Kubota won her third consecutive bout at Rizin 24, taking a unanimous verdict over Emi Tomimatsu in a strawweight affair at Saitama Super Arena in Saitama, Japan, on Sept. 27. The Shoot Boxing champion is 10-2 when competing under the Japanese promotion’s banner, with both of her defeats coming at the hands of Kanna Asakura.

For two rounds, Cummins appeared to be well on her way to securing atomweight gold at Invicta Fighting Championships 42, but she was unable to maintain that momentum, ultimately falling to Alesha Zappitella via shoulder choke in the fourth round of their headlining bout. It was the first submission loss of Cummins’ MMA career and the second time she has come up short in an Invicta FC championship fight.

Maesawa successfully defended the Deep-Jewels championship she won in December 2018, as she submitted Hikaru Aono with a guillotine choke 57 seconds into the third round of their encounter at Deep-Jewels 30 on Oct. 31. With that victory, Maesawa rebounded from a submission loss to Ayaka Hamasaki at Rizin 22 in August. Maesawa is 5-3 since 2018 with losses to some of the best atomweight has to offer: Hamasaki, Seo Hee Ham and Kanna Asakura.

Kurobe has rebounded from back-to-back losses to Ayaka Hamasaki and Tomo Maesawa in 2018 to post a four-bout winning streak — with three of those victories coming inside the distance. A former Deep-Jewels title holder and Shooto’s reigning atomweight queen, the 43-year-old Tokyo native is coming off a unanimous decision triumph against Megumi Sugimoto in August.