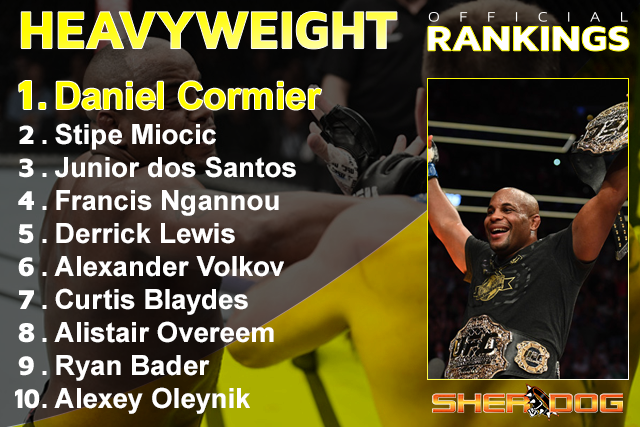 After going 3-3 during a six-bout stretch from 2012 to 2017, Junior dos Santos appears to be revitalized. The former heavyweight king won his third consecutive bout at UFC Wichita, defeating Derrick Lewis via technical knockout 1:58 into the second round of their headlining encounter. In his last three contests — all of which occurred in headlining bouts — dos Santos has bested Lewis, Tai Tuivasa and Blagoy Ivanov to climb back into championship contention. Next, he’ll face Francis Ngannou in a potential title eliminator bout at UFC 239 on July 6.

Francis Ngannou lost much of his luster as the heavyweight division’s “Next Big Thing” during a disappointing first half of 2018 in which he dropped lackluster decisions against Stipe Miocic and Derrick Lewis. However, “The Predator” has since reversed course with back-to-back first-round stoppages of Curtis Blaydes and Cain Velasquez in his most recent two Octagon appearances. While the Cameroonian-born Frenchman may never be built for long, drawn-out fights, his knockout power makes him one of the most fearsome talents in the division. Ngannou will face ex-champ Junior dos Santos at UFC 239 with a potential No. 1 contender’s spot on the line.

Blaydes got back to doing what he does best at UFC Nashville, as he dominated Justin Willis with his wrestling and ground-and-pound en route to a unanimous decision victory. Blaydes was in complete control, earning 30-25 and 30-26 scorecards en route to his fifth victory in his last six Octagon appearances. More importantly, “Razor” Blaydes showed he could bounce back from what could have been a disheartening 45-second technical knockout loss to Francis Ngannou in his previous fight. Thus far, Ngannou is the only man to defeat Blaydes — with two stoppage wins — in the UFC.

Oleynik was aggressive from the outset against Alistair Overeem in the UFC St. Petersburg headliner, and while he even outlanded his Dutch opponent, he ultimately fell victim to “The Reem’s” more accurate and powerful striking in the opening stanza. The Russian submission entered the matchup having won four of his last five UFC appearances and deserves credit for taking a tough matchup on short notice following Alexander Volkov’s exit from the card.