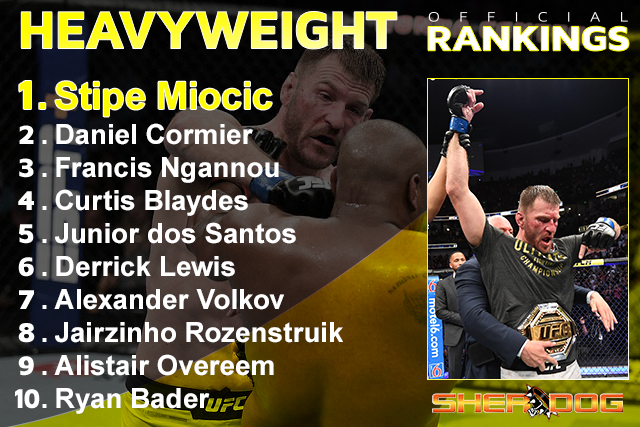 Ngannou bolstered an already-fearsome reputation at UFC 249, when he demolished the previously unbeaten Jairzinho Rozenstruik in just 20 seconds. It was the fourth straight first-round finish and eighth inside of a round overall in UFC competition for “The Predator,” who now must play the waiting game as the promotion attempts to find a date for the Stipe Miocic-Daniel Cormier trilogy. In the meantime, Ngannou’s attempt to stoke the flames for a Jon Jones superfight fell short — at least for the time being.

Blaydes couldn’t land a single takedown against Junior dos Santos in the UFC Fight Night 166 headliner in Raleigh, N.C., and it didn’t matter one bit. The Chicago native stunned his foe with a big right hand and then attacked with punches and knees near the fence for a technical knockout victory 66 seconds into the second round. “Razor” Blaydes is now 8-2 with one no contest within the Las Vegas-based promotion. Blaydes is will face Alexander Volkov on June 20.

Dos Santos may be inching closer to gatekeeper status following a second-round TKO defeat at the hands of Curtis Blaydes in the UFC Fight Night 166 main event. While “Cigano” did well defending his opponent’s takedowns, he had no answers for Blaydes’ powerful overhand right, which ultimately led to his demise. The 35-year-old Brazilian has now lost back-to-back fights via TKO and his last five defeat in UFC competition have come via knockout or technical knockout. Dos Santos will square off against Jairzinho Rozenstruik at UFC 252 on Aug. 15.

Lewis’ penchant to go for broke saved him against Ilir Latifi at UFC 247. “The Black Beast” struggled at times with the grinding approach of the converted light heavyweight, but a furious final two minutes delighted the hometown Houston crowd and allowed Lewis to edge Latifi on the scorecards via unanimous decision. It wasn’t quite on the level of his Hail Mary finish of Alexander Volkov, but Lewis’ awareness is encouraging to see in a fight where he could have lost without a sense of urgency. Lewis has now won his last two fights in UFC competition.

Faced with an inexperienced opponent on short notice, Volkov authored a veteran performance against Greg Hardy at UFC Fight Night 163, picking his foe apart with straight punches and kicks at range to earn a unanimous decision in Moscow. Volkov’s cautious effort may have been a product of his last bout, when he was ahead on the scorecards against Derrick Lewis before losing via knockout with 11 seconds left in Round 3 at UFC 229. The 31-year-old Russian has won seven of his last eight professional fights and is will return to action against Curtis Blaydes on June 20.

Perhaps Francis Ngannou was right: Rozenstruik didn’t really know what he was getting into when he called out the division’s scariest knockout artist. After a 20-second TKO defeat at FUC 249, Rozenstruik definitely knows. While “Bigi Boy” was one of 2019’s breakout fighters with a 4-0 campaign that concluded a Hail Mary KO of Alistair Overeem, it’s clear that he still has a ways to go before breaking into the upper echelon at heavyweight. Rozenstruik will get a chance to rebound when he locks horns with Junior dos Santos at UFC 252 on Aug. 15.

Overeem’s chin held up during a first-round assault from Walt Harris in the UFC on ESPN 8 headliner, and once “The Big Ticket” emptied his gas tank, the Dutch veteran was able to capitalize for a second-round technical knockout victory in Jacksonville, Florida, on May 16. The former Strikeforce, Dream and K-1 champion celebrated his 40th birthday shortly thereafter, and he has designs on chasing another title shot in the final chapter of his career. Overeem has won three of his last four Octagon appearances — a stretch that could easily be four straight were it not for a last-second lapse against Jairzinho Rozenstruik.

Bader was never in danger against Cheick Kongo in the Bellator 226 headliner, as he rattled the Frenchman on the feet before taking his opponent down and imposing his will on the mat. However, the bout ended prematurely due to an inadvertent eye poke from the Power MMA Team representative. As a result, Bader has a no contest on his record but is unbeaten in his last eight bouts dating back to September 2016. Bader plans on defending his light heavyweight belt next once Bellator MMA resumes its schedule.