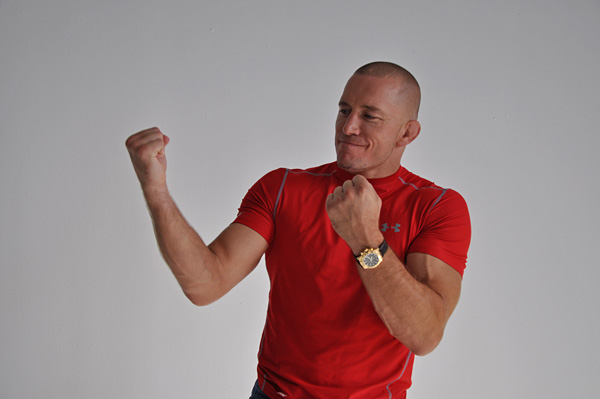 
The welterweight division’s long-reigning king did not miss a beat in his return from an 19-month layoff, dominating interim champ Carlos Condit in a five-round decision win at UFC 154. While top contender Johny Hendricks waits on-deck, St. Pierre appears headed for a big-money super fight against his middleweight counterpart, Anderson Silva.


Hendricks needed a big win at UFC 154 to stake his claim as the new No. 1 welterweight contender, and he produced exactly that. It took the “Bigg Rigg” just 46 seconds to lay waste to Martin Kampmann with a thunderous left hand that made UFC boss Dana White proclaim Hendricks next in line for a shot at Georges St. Pierre. However, with the UFC targeting a GSP-Anderson Silva blockbuster bout, there is no telling when Hendricks’ time may come.


Diaz’s year-long suspension for a failed drug test following UFC 143 comes to an end on Feb. 4. While the Stockton, Calif., bad boy has expressed a desire to face Georges St. Pierre upon his return, a more likely dance partner could be fellow Californian Josh Koscheck -- a potential pairing that seems agreeable to the Diaz camp.


Winless in nearly two years, courtesy of his controversial draw with B.J. Penn and his quick knockout loss to Johny Hendricks, Fitch was in a high-stakes, must-win situation against Brazilian prospect Erick Silva at UFC 153, and he delivered. Fitch wore out the blue chipper in a thrilling, dramatic 15-minute fight that was easily among the year’s best, signaling that his presence is still a factor at 170 pounds.


It took longer than expected to happen, with the cancellation of UFC 151, but Ellenberger’s eventual unanimous decision win over Jay Hieron at UFC on FX 5 was more or less what folks expected. The Nebraskan hammered out a workmanlike verdict and remains a notable in the UFC’s welterweight division.


On the road to recovery from a bulging disc in his back that forced him out of a bout with Jake Ellenberger, Koscheck is eying a return to the Octagon in early 2013. In a recent post on his Twitter account, “The Ultimate Fighter” Season 1 alumnus mentioned Nick Diaz, Demian Maia, Ellenberger and Rory MacDonald as the opponents he would most like to face.


It was not flashy, but Askren wrestled his way to another dominating win over perhaps his most dangerous opponent to date with an April 6 routing of Douglas Lima. Bellator’s welterweight ace will next defend his title against Frenchman Karl Amoussou when the promotion moves to Spike TV in 2013.


Marquardt will defend his 170-pound strap against Tarec Saffiedine on Jan. 12 in what is expected to be Strikeforce’s final event. That clears the way for the Coloradan to return to the UFC, which released him in June 2011 when a drug test revealed elevated levels of testosterone in his system prior to a UFC Live 4 matchup with Rick Story.