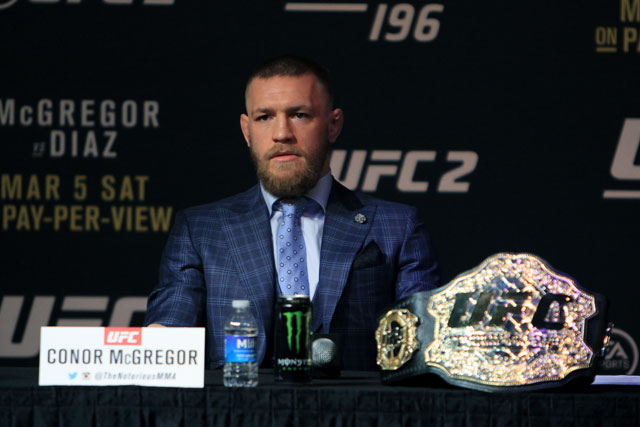 Conor McGregor attempted a real-life pound-for-pound leap and came up on the wrong end of the scale at UFC 196.

The undisputed UFC featherweight titleholder made a bold move up in weight to challenge 155-pound champ Rafael dos Anjos and an even bolder move when dos Anjos pulled out less than two weeks from the event. McGregor accepted a short-notice bout at 170 pounds against lightweight Nate Diaz, who proved more than up to the task of dimming the UFC’s brightest star. Diaz stunned the Irish knockout artist, first by withstanding several thunderous punches and then by delivering a few dozen of his own. McGregor’s oft-questioned ground game came into play when jiu-jitsu black belt Diaz floored, mounted and choked him into submission in the second round.

After the bout, McGregor admitted that the one-punch power which ended the reign of Jose Aldo in just 13 seconds did not carry over to welterweight as he believed it would. As such, McGregor will head back down the scale to defend his title for the first time, likely at UFC 200 and possibly in a return match with Aldo.

McGregor and Aldo -- previously ranked fifth and sixth, respectively -- fall to the low end of the top 10, along with the former No. 7, ex-middleweight champ Chris Weidman. The shift moves heavyweight ace Fabricio Werdum, welterweight king Robbie Lawler and light heavyweight titleholder Daniel Cormier to the middle of the list.

Jones has been out of commission since January 2015 after being suspended by the UFC and stripped of his light heavyweight title, but it has done little to diminish his status as the world’s premier mixed martial artist. Prior to his well-documented legal troubles, Jones was riding roughshod over the 205-pound class and had defended the belt a division-record eight times, effectively clearing out the division. Now reinstated, the 28-year-old is set to return to the Octagon in a UFC 197 rematch with nemesis Daniel Cormier, who now holds the belt which “Bones” never lost in the cage.

It took a full five rounds for dos Anjos to wrest the UFC lightweight title from Anthony Pettis, but the new champ’s first defense lasted nowhere near as long. Dos Anjos on Dec. 19 needed only 66 seconds to melt old foe Donald Cerrone with a vicious mixture of strikes, making easy work out of one of the division’s most dangerous contenders. Since 2012, the Brazilian has racked up a remarkable 10-1 run inside the Octagon, his only loss coming against Khabib Nurmagomedov. An injured foot took dos Anjos out of a title defense against Conor McGregor at UFC 196; specifics of his return and next bout are currently unknown.

Johnson continues to reign supreme over the 125-pound division. His latest feat came at UFC 191, where the 29-year-old defended his belt for the seventh time -- Anderson Silva holds the all-time record at 10 -- with a lopsided decision over “The Ultimate Fighter” Season 14 winner John Dodson. In a little less than three years as champion, “Mighty Mouse” has taken out all contenders in his weight class, and he has done so in convincing fashion. Johnson will carry a nine-fight winning streak into his next appearance, a UFC 197 defense against unbeaten Olympic wrestler Henry Cejudo.

Rockhold made the most of what he believed was an overdue title shot, grabbing the middleweight crown at UFC 194 and handing Chris Weidman his first defeat in the process. The American Kickboxing Academy product put on the performance of his career to slice, pound and eventually finish Weidman in the fourth frame. Since entering the Octagon as the final Strikeforce 185-pound champ, Rockhold has recorded impressive finishes against the likes of Lyoto Machida and Michael Bisping, with the only blemish on his 5-1 mark coming in a knockout loss to Vitor Belfort. Rockhold will once again tangle with Weidman in the main event of UFC 199 in June.

For years, Werdum was regarded as the best heavyweight grappler in MMA. Since running over Cain Velasquez at UFC 188, the 38-year-old Brazilian is being recognized as the best heavyweight in MMA, period. “Vai Cavalo” is currently on a 6-0 run inside the Octagon, and his outstanding résumé includes wins over divisional icons Fedor Emelianenko and Antonio Rodrigo Nogueira. Werdum will look to cement his status as the sport’s top big man when he defends his UFC title against Stipe Miocic on May 14.

Lawler could not be more stylistically different from former UFC welterweight champ Georges St. Pierre; and yet, over the past two years, the new ruler of the 170-pound division has proven similarly impossible to defeat. At UFC 195, the 33-year-old action fighter withstood four rounds of high-output offense from Carlos Condit before finding another gear and nearly wiping out the challenger in the final frame. As in his gold-winning performance against Johny Hendricks, Lawler walked away with a contentious split decision. Scorecards aside, the list of opponents topped by the “Ruthless” one since his 2013 UFC return represents one of the toughest schedules any champ has endured: Condit, Hendricks, Matt Brown and Rory MacDonald (twice) have all come up short in their attempts to take out one of the toughest men in combat sports.

In the year since his failed bid to dethrone Jon Jones, Cormier has claimed the mantle left vacant when his rival was stripped and suspended by the UFC. The 36-year-old became MMA’s de facto light heavyweight ruler when he dismantled Anthony Johnson in May, then followed up with an impressive victory over Alexander Gustafsson in October. Hardware aside, Cormier’s record boasts some impressive names, with wins over former heavyweight champs like Josh Barnett and Frank Mir, plus heavy hitters such as Johnson and Dan Henderson.

McGregor’s ascent to the top of the featherweight division was a rapid and violent one, but the aura of invincibility around “Mystic Mac” fell away when he faced Nate Diaz at UFC 196. The Irishman submitted to a second-round choke from Diaz in their short-notice welterweight tilt, marking McGregor’s first defeat in eight Octagon appearances. While an eventual move to 155 pounds seems to be in the cards, McGregor for now plans to return to 145 pounds and defend the belt that he snatched from Jose Aldo in December.

All things must pass, and Aldo’s time as the invincible ruler of the featherweight division came to a shocking conclusion at UFC 194. The only undisputed 145-pound champion the Octagon had ever known was knocked senseless by Conor McGregor in only 13 seconds, slamming shut the book on an era of divisional dominance. As WEC and UFC champion, Aldo bested the likes of Urijah Faber (twice), Frankie Edgar and Kenny Florian. With near-constant injuries keeping “Scarface” out of action for extended stretches, stringing together another such run could prove extremely difficult.

After 13 professional fights without a defeat and two wins over middleweight legend Anderson Silva, the “All-American” finally met his match at UFC 194. Weidman struggled valiantly but could not withstand the punishing ground-and-pound of Luke Rockhold, who snatched away the UFC 185-pound title with a fourth-round stoppage. The 31-year-old New Yorker defended the belt three times -- including a May knockout of former Rockhold foil Vitor Belfort -- before being deposed.