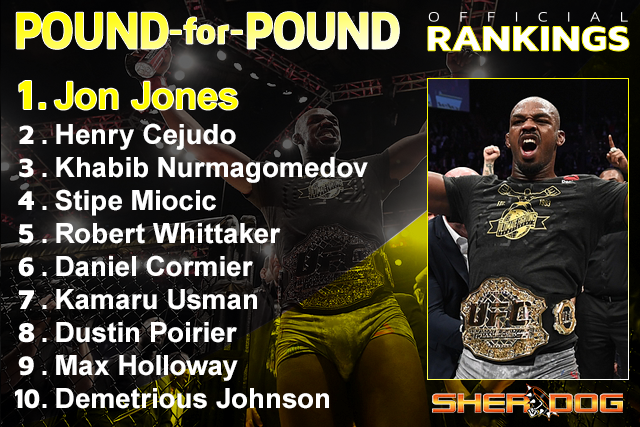 The ordering process for Ultimate Fighting Championship pay-per-views has changed: UFC 241 is only available on ESPN+ in the U.S.

Miocic’s previous run as the longest-reigning heavyweight champion in UFC history had him as a fixture in our pound-for-pound Top 10 until a loss to Daniel Cormier and a year of inactivity dropped him from our poll.

Now, the Ohio-based firefighter is back in a big way, shooting up to the No. 4 spot following a come-from-behind victory over Cormier in a rematch at UFC 241 in Anaheim, Calif., on Saturday night. Not only did Miocic reclaim the heavyweight throne, but he displayed plenty of resilience in doing so, rallying with a strategically sound and devastating approach in the fourth stanza after being outstruck for the better part of 15 minutes. That gives Miocic five victories in UFC title bouts and a legitimate claim to being the heavyweight GOAT.

Cormier, meanwhile, finally has a loss to someone other than Jon Jones on his ledger. While “DC” contemplates retirement in the coming weeks, he will fall from second to fifth in the pound-for-pound rankings.

Post-fight shenanigans aside, Nurmagomedov was in prime form against Conor McGregor at UFC 229. He completed takedowns, applied heavy top pressure and generally made life difficult for the knockout-minded Irishman at every turn. “The Eagle” even survived adversity — he lost a round for the first time in his promotional tenure — before tapping McGregor with a neck crank at the 3:03 mark of round four. Nurmagomedov received a nine-month suspension — which can be reduced to six with the production of an anti-bullying PSA — and a $500,000 fine for his role in the post-fight brawl that occurred after the bout. The Dagestani will next defend his title against interim king Dustin Poirier at UFC 242 on Sept. 7.

An emergency hernia surgery forced Whittaker to withdraw from his scheduled title defense against Kelvin Gastelum at UFC 234. Even more disappointing, that’s twice that “The Reaper” has been forced to pull out of headlining championship fights in his home country of Australia (An injury also forced him out of a proposed matchup with Luke Rockhold at UFC 221.) Whittaker has won nine bouts in a row but is still awaiting his first official belt defense, as his UFC 225 triumph over Yoel Romero was a non-title bout due to Romero missing weight. A title unification bout with interim champ Israel Adesanya will take place at UFC 243 on Oct. 5.

Even those who predicted victory for Usman couldn’t have imagined “The Nigerian Nightmare” being as dominant as he was against Tyron Woodley at UFC 235. Usman claimed the welterweight throne on the strength of five dominant rounds against Woodley, overwhelming his opponent with wrestling, clinch work and top control. In fact, Usman probably deserved more 10-8 scorecards than he received. Nonetheless, Usman has hardware for his trophy case and an ongoing 10-fight winning streak. Usman is targeting a fall return to the Octagon as he recovers from a March surgery that repaired a double hernia, and it looks as though Colby Covington will be next on the agenda.

It took him 22 fights to get there, but Poirier is finally a UFC champion. “The Diamond” went five hard rounds with featherweight king Max Holloway, relying on his power to pull out a unanimous decision triumph in the UFC 236 headliner. Poirier has lost just once in 11 bouts since moving up to lightweight, compiling a resume that includes victories over the likes of Holloway, Eddie Alvarez, Justin Gaethje and Anthony Pettis, to name a few. That path doesn’t get any easier for the American Top Team product, as he now has a title unification bout with Khabib Nurmagomedov officially set for UFC 242 Abu Dhabi..

Holloway remains the unquestioned king of the featherweight division. After a loss to Dustin Poirier in a bid for the interim lightweight crown this past April, “Blessed” returned to form at UFC 240, as he outstruck Frankie Edgar for the better part of 25 minutes in the evening’s main event at Rogers Place in Edmonton, Alberta, Canada. The gives the Hawaiian 16 featherweight wins and 17 overall in UFC competition, and at 27 years old, he could just be getting started. Holloway’s most likely next opponent, Alexander Volkanovski, was in attendance for the UFC 240 bout, setting the stage for an interesting matchup later in 2019.