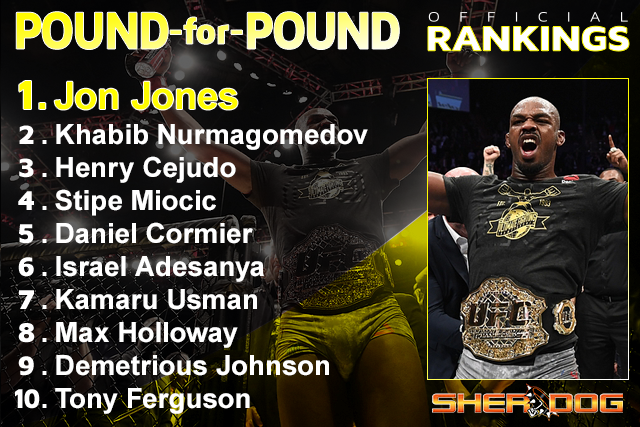 The ordering process for Ultimate Fighting Championship pay-per-views has changed: UFC 243 is only available on ESPN+ in the U.S.

Israel Adesanya entered a new tier of stardom on Saturday night in Melbourne.

Just 18 months after making his Octagon debut in February 2018, “The Last Stylebender” unified the middleweight belts with a second-round technical knockout of Robert Whittaker in the UFC 243 headliner at Marvel Stadium. The Nigerian-born Kiwi was precise, patient and deadly with his standup, and it was ultimately too much for Whittaker, who entered the contest on a nine-bout winning streak.

Adesanya has both a seven-fight winning streak and the coveted “it” factor as he debuts in our pound-for-pound poll Top 10 at No. 6. He’s also got a fellow unbeaten contender in his sights next, as it appears a showdown with Paulo Henrique Costa is on the horizon. Whittaker, meanwhile, plummets from fifth to our top bubble spot. At just 28 years old, it wouldn’t be surprising to see “The Reaper” make a strong comeback in the near future.

Adesanya may have already been a star heading into UFC 243, but now “The Last Stylebender” is one of the Las Vegas-based promotion’s brightest lights. The Nigerian-born Kiwi ended the Robert Whittaker’s middleweight title reign in Melbourne with a pair of counter hooks and follow-up ground strikes at the 3:33 mark of Round 2. Adesanya has won seven consecutive fights in the Octagon, and already has a No. 1 contender in waiting in hulking Brazilian Paulo Henrique Costa.

Even those who predicted victory for Usman couldn’t have imagined “The Nigerian Nightmare” being as dominant as he was against Tyron Woodley at UFC 235. Usman claimed the welterweight throne on the strength of five dominant rounds against Woodley, overwhelming his opponent with wrestling, clinch work and top control. In fact, Usman probably deserved more 10-8 scorecards than he received. Nonetheless, Usman has hardware for his trophy case and an ongoing 10-fight winning streak. After recovering from double-hernia surgery, Usman was expected to defend his belt against Colby Covington at UFC 244, but after a lengthy negotiating process, the two will meet in the UFC 245 headliner on Dec. 14.

Holloway remains the unquestioned king of the featherweight division. After a loss to Dustin Poirier in a bid for the interim lightweight crown this past April, “Blessed” returned to form at UFC 240, as he outstruck Frankie Edgar for the better part of 25 minutes in the evening’s main event at Rogers Place in Edmonton, Alberta, Canada. The gives the Hawaiian 16 featherweight wins and 17 overall in UFC competition, and at 27 years old, he could just be getting started. Holloway will next defend his title against the red-hot Aussie at UFC 245 in Las Vegas on Dec. 14.