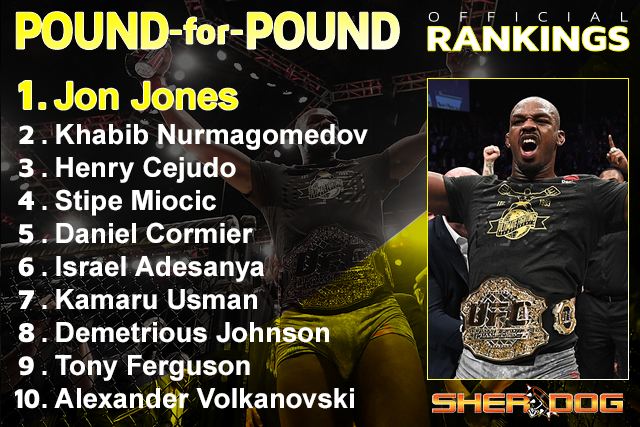 The ordering process for Ultimate Fighting Championship pay-per-views has changed: UFC 245 is only available on ESPN+ in the U.S.

By becoming the first man to defeat Max Holloway in a featherweight fight since 2013, Alexander Volkanovski has earned himself a spot in Sherdog.com’s pound-for-pound rankings.

Volkanovski checks in at No. 10 in our latest poll following a masterful performance in the UFC 245 co-main event. Alexander “The Great” attacked with leg kicks, punching combinations and limited Holloway’s output over the course of their five-round battle at the T-Mobile Arena in Las Vegas to claim the featherweight throne with a unanimous decision victory. Holloway, with his second loss in three UFC appearances, falls from No. 8 to the pound-for-pound bubble.

Meanwhile, Kamaru Usman successfully defended his welterweight belt for the first time, as he defeated rival Colby Covington by technical knockout at the 4:10 mark of the fifth round in the UFC 245 headliner. “The Nigerian Nightmare” remains entrenched at the seventh spot in our rankings for the time being, while Covington stays put on the bubble with an admirable effort in defeat.

For the second time this year, Jones needed five rounds to retain his 205-pound belt in a matchup with a converted middleweight. Unlike his five-round beatdown of Anthony Smith in March, Jones did experience some adversity against Thiago Santos in the UFC 239 main event. The Brazilian striker punished Jones’ legs with low kicks and attacked with aggression throughout their 25-minute encounter but ultimately dropped a split decision to Jonny “Bones.” Upon further examination, Jones might have been more in control than it initially appeared, as he was the far more efficient striker throughout the contest, while Santos often struggled to navigate the reach of his foe. Next, Jones will continue his quest to clean out the division when he faces the unbeaten Dominick Reyes at UFC 247 in Houston on Feb. 8.

Nurmagomedov needed less than 15 minutes to dispatch Dustin Poirier at UFC 242, and he made it look astonishingly easy. “The Eagle” overwhelmed his opponent with takedowns and pressure from the outset of the bout, gradually wearing Poirier down until he secured the rear-naked choke submission at the 2:06 mark of Round 3. The reigning lightweight champion’s winning streak is now at 12, which ties him with Tony Ferguson for the sixth-longest winning streak in UFC history. Barring injury, Nurmagomedov will finally square off against Ferguson with lightweight gold on the line on April 18 in Brooklyn, N.Y.

Adesanya may have already been a star heading into UFC 243, but now “The Last Stylebender” is one of the Las Vegas-based promotion’s brightest lights. The Nigerian-born Kiwi ended the Robert Whittaker’s middleweight title reign in Melbourne with a pair of counter hooks and follow-up ground strikes at the 3:33 mark of Round 2. Adesanya has won seven consecutive fights in the Octagon, and seemingly already has a No. 1 contender in waiting in hulking Brazilian Paulo Henrique Costa. However, the promotion has apparently targeted a different foe for Adesanya as Costa recovers from a torn bicep that will keep him out until April 2020..

Usman’s endured a challenging first title defense, as he battled Colby Covington for nearly five rounds before earning a technical knockout victory at the 4:10 mark of the fifth round in the UFC 245 main event at the T-Mobile Arena in Las Vegas. Usman survived Covington’s high output early and gradually asserted himself as the bout wore on thanks to solid body work and harder strikes overall. “The Nigerian Nightmare” has begun his UFC tenure with 11 consecutive victories, and the latest was his most difficult to date. As a result, a rematch could be in the offing down the road.

Johnson added a new piece of hardware to his collection in Tokyo, as he outpointed Danny Kingad to capture the One Championship flyweight grand prix belt on Oct. 12. After losing the UFC 125-pound strap to Henry Cejudo in August 2018, “Mighty Mouse” was traded to a new organization and pieced together victories over Yuya Wakamatsu, Tatsumitsu Wada and Danny Kingad within the Singapore-based promotion in 2019. While it wasn’t always a cakewalk for the AMC Pankration product, the accomplishment was made even more impressive considering the fact that all three triumphs occurred essentially one weight class above the division where Johnson established himself as one of the sport’s most dominant competitors. An eventual showdown with reigning One flyweight tiltlist Adriano Moraes awaits when Johnson is ready to return to action.

It wasn’t necessarily the ending he envisioned, but Ferguson appeared to be well on his way to defeating Donald Cerrone at UFC 238 before the contest was halted prior to round three due to “Cowboy’s” swollen eye. Cerrone certainly got his shots in, but “El Cucuy” utilized his usual multi-faceted offensive approach to land more than 50 significant strikes in both the first and second rounds. With 12 consecutive wins under his belt, there is no more deserving No. 1 contender at lightweight than Ferguson. “El Cucuy” will challenge Khabib Nurmagomedov for the lightweight crown at a pay-per-view event in Brooklyn on April 18.