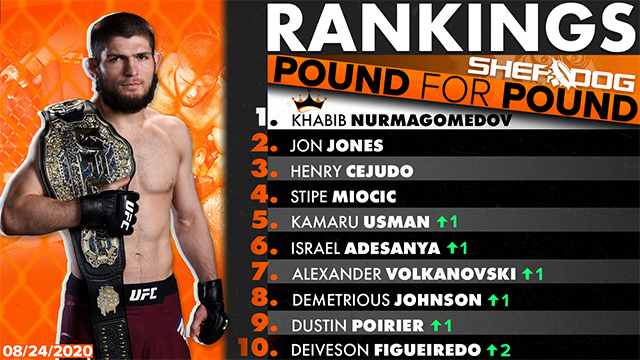 
If Stipe Miocic isn’t the heavyweight GOAT, he’s at least very much in the conversation.

The Ohio-based firefighter improved to 2-1 against Daniel Cormier, ending their heavyweight championship trilogy with a five-round verdict in the UFC 252 headliner at the UFC Apex in Las Vegas on Saturday night. In a volatile division, Miocic has been a consistent force: His only loss in nine Octagon appearances since 2015 was the first-round KO at the hands of Cormier at UFC 226 — a setback he has now avenged twice. That stretch also includes six victories in heavyweight title bouts, tying him with Randy Couture for the most in promotion history. Which is all to say that Miocic made a compelling case to move past Henry Cejudo in our latest pound-for-pound rankings, but ultimately, capturing belts in two divisions allowed Cejudo to maintain his No. 3 spot.

Cormier, meanwhile, takes a bit of a fall, dropping from fifth to 12th. The American Kickboxing Academy stalwart reiterated his plans to retire in the aftermath of his latest defeat, but it’s best to take a wait-and-see approach in such matters. Recently-crowned flyweight champion Deiveson Figueiredo is the biggest beneficiary of Cormier’s misfortune, as he enters the pound-for-pound Top 10 for the first time.

Nurmagomedov needed less than 15 minutes to dispatch Dustin Poirier at UFC 242, and he made it look astonishingly easy. “The Eagle” overwhelmed his opponent with takedowns and pressure from the outset of the bout, gradually wearing Poirier down until he secured the rear-naked choke submission at the 2:06 mark of Round 3. Nurmagomedov’s long-anticipated date with Tony Ferguson remains cursed, as their headlining bout at UFC 249 was scrapped after the Dagestani fighter was stranded in Russia due to travel restrictions designed to combat the coronavirus pandemic. Nurmagomedov is expected to face new interim king Justin Gaethje at UFC 254 on Oct. 24.

Miocic closed the book on his rivalry with Daniel Cormier in the UFC 252 headliner, earning a unanimous decision triumph to retain his heavyweight title at the UFC Apex in Las Vegas on Aug. 15. In addition to taking two of three from Cormier in what was a memorable trilogy, Miocic’s sixth victory in a heavyweight championship bout tied him with Randy Couture for the most in the history of the division. The Ohio-based firefighter, who also holds the record for most consecutive heavyweight title defenses, is now at or near the top of any GOAT debate in his weight class. A rematch with Francis Ngannou could be on the horizon, while light heavyweight Jon Jones also looms large should “Bones” decide to move up in weight.

Adesanya didn’t score many style points at UFC 248, but he was able to emerge from the evening’s headliner with his undefeated record intact following a unanimous verdict over Yoel Romero at the T-Mobile Arena in Las Vegas. The Nigerian-born Kiwi opted for a conservative approach against a dangerous opponent, as he picked his spots and relied heavily on leg kicks to improve to 8-0 in UFC competition. A showdown at UFC 253 with another dangerous adversary in Paulo Henrique Costa looms for “The Last Stylebender,” who could certainly use a more fan-friendly effort in his next Octagon appearance..

Johnson added a new piece of hardware to his collection in Tokyo, as he outpointed Danny Kingad to capture the One Championship flyweight grand prix belt on Oct. 12. After losing the UFC 125-pound strap to Henry Cejudo in August 2018, “Mighty Mouse” was traded to a new organization and pieced together victories over Yuya Wakamatsu, Tatsumitsu Wada and Danny Kingad within the Singapore-based promotion in 2019. While it wasn’t always a cakewalk for the AMC Pankration product, the accomplishment was made even more impressive considering the fact that all three triumphs occurred essentially one weight class above the division where Johnson established himself as one of the sport’s most dominant competitors. A showdown with reigning One flyweight titlist Adriano Moraes awaits.

With no issues on the scale this time around, Figueiredo claimed the vacant flyweight crown with a first-round submission of Joseph Benavidez in the UFC Fight Night 172 headliner on July 18. Now a dominant 2-0 against the sport’s longtime No. 2 at 125 pounds, Figueiredo looks like a formidable champion. The 32-year-old Brazilian has won eight of his nine Octagon appearances since joining the promotion in 2017. Figueiredo’s first task as champion will be a defense against former 135-pound king Cody Garbrandt at UFC 255 on Nov. 21.