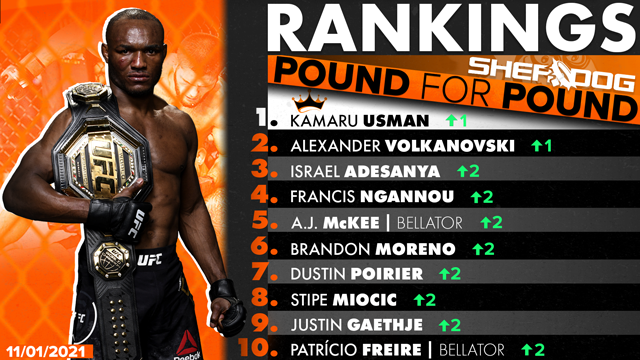 
It was a short-lived stint for Jan Blachowicz as UFC light heavyweight champion.

Blachowicz’s vaunted “Polish Power” was silenced in the UFC 267 headliner, as he fell victim to a Glover Teixeira rear-naked choke 3:02 into the second round at Etihad Arena in Abu Dhabi on Saturday. Blachowicz appeared to be overwhelmed on the ground against his 42-year-old adversary, and as a result, he takes a steep fall in Sherdog.com's pound-for-pound poll, from fourth to 12th. Teixeira, meanwhile, enters the rankings at No. 11.

Gaethje attacked as best he could against Khabib Nurmagomedov, but he was no match for “The Eagle” on the ground. Although the former World Series of Fighting title holder had some success on the feet, particularly with low kicks, the grappling exchanges were another matter entirely, as Gaethje fell victim to a triangle choke 1:34 into Round 2 of the UFC 254 headliner at the Flash Forum in Abu Dhabi on Oct. 24. Gaethje had a four-bout winning streak snapped in defeat. “The Highlight” will return for an all-action clash against Michael Chandler at UFC 268.

« Previous Adrian Yanez on Aljamain Sterling’s Injury: ‘His Body Just Wasn’t Feeling Right for Him’ Next Benoit St. Denis’ Coach Defends Decision Not to Throw in Towel at UFC 267 »