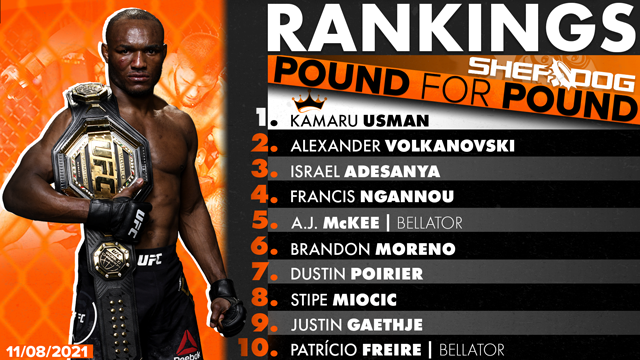 
For all intents and purposes, Kamaru Usman closed the book on his rivalry with Colby Covington at UFC 268, maintaining his spot atop the pound-for-pound rankings in the process.

“The Nigerian Nightmare” rode a strong start — which included a pair of knockdowns in the second round — to a unanimous decision triumph over his bitter rival in Saturday’s headliner at Madison Square Garden in New York. Usman had to survive some difficulties in the championship rounds against a surging Covington, but “Chaos” didn’t have enough in the tank to put his opponent away. It wasn’t Usman’s most dominant effort during his 15-fight UFC winning streak, but he remains a clear-cut No. 1 in Sherdog’s poll ahead of second-ranked Alexander Volkanovski. As he continues to pile up victories, Usman is coming closer to Georges St. Pierre’s title of welterweight GOAT, as well.

« Previous Fight Facts: UFC 268 Next Michael Chandler: ‘We Made Some Questionable Decisions’ in UFC 268 Loss to Justin Gaethje »