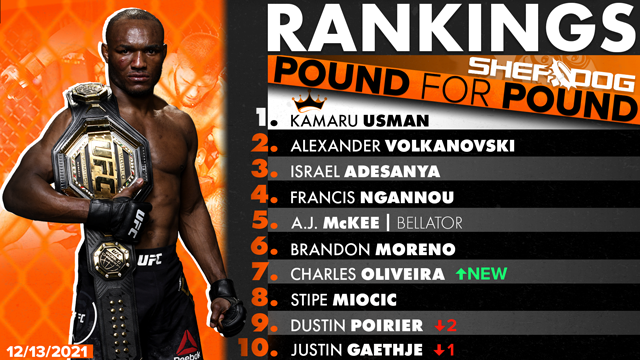 
It’s time to give Charles Oliveira some long overdue respect.

On the heels of his 10th consecutive victory – a third-round submission of Dustin Poirier in the UFC 269 headliner – “Do Bronx” finally makes his debut in Sherdog.com’s pound-for-pound rankings. The promotion’s all-time submission leader joined the 20-win club on Saturday night, and along with that, he takes Poirier’s No. 7 ranking. No longer can anyone question Oliveira’s heart after surviving heavy punches from both Poirier and Michael Chandler under the championship spotlight in 2021.

Meanwhile, the vanquished Poirier stays in the Top 10 on the strength of a head-to-head victory over No. 1 lightweight contender-in-waiting Justin Gaethje. However, with submission defeats in his last two title bouts, it could be some time before “The Diamond” gets to the top of the divisional mountain again.

After failing in his bid to become a two-division champion this past March, Adesanya showed the world that he still reigns supreme at middleweight, as he cruised to a five-round verdict over Marvin Vettori in the UFC 263 headliner at Gila River Arena in Glendale, Ariz., on June 12. It was a much more decisive triumph than their first meeting, when “The Last Stylebender” captured a split verdict over his Italian rival at UFC on Fox 29 in April 2018. With 10 consecutive middleweight triumphs under his belt, the City Kickboxing stalwart now turns his attention to a rematch with ex-champ Robert Whittaker at UFC 271.

Ngannou brought the same ferocious knockout power into his rematch with Stipe Miocic at UFC 260, but improved takedown defense allowed him to use it much more effectively. The end result was a second-round knockout victory that made “The Predator” the 17th heavyweight champion in UFC history. The Cameroonian-born Frenchman has laid waste to some of the division’s best during his run to the top. Up next, a title unification bout against Ciryl Gane looms at UFC 270 on Jan. 22.

Oliveira showcased his durability early against Dustin Poirier, then imposed his will through grappling to retain his lightweight crown with a third-round submission victory in the UFC 269 main event at the T-Mobile Arena in Las Vegas on Dec. 11. “Do Bronx” has won 10 consecutive fights dating back to June 2018 and only seems to be getting better. The Brazilian appears to be on a collision course with former World Series of Fighting champ Justin Gaethje — another potential all-action bout to look forward to in 2022.