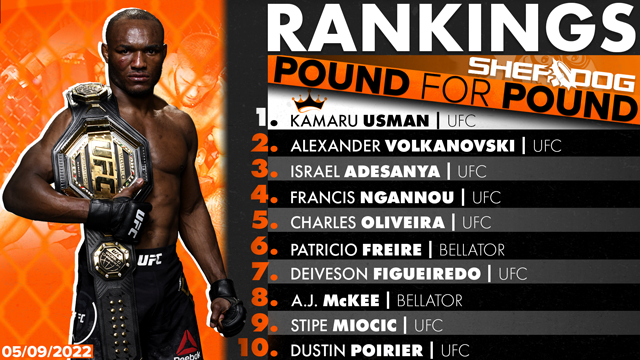 
Charles Oliveira may no longer be UFC lightweight champion, but his stock continues to rise.


Advertisement
After a controversial mishap on the scales caused him to lose the 155-pound strap, “Do Bronx” soldiered onward, rallying through some early adversity to submit Justin Gaethje in the opening round of the UFC 274 headliner at the Footprint Center in Phoenix, Ariz., on Saturday night. The victory assures Oliveira of being one-half of the next lightweight title tilt, and he adds to a resume that includes 21 UFC triumphs, 19 finishes, 16 submissions and an active streak of 11 consecutive victories. If that’s not pound-for-pound worthy, nothing is. As it stands, the Brazilian holds on to his No. 5 spot in Sherdog’s latest rankings.

Gaethje, meanwhile, falls to 0-2 in UFC title bouts, and not only has “The Highlight” come up short, but he has been submitted on both occasions. That would typically be cause for a pound-for-pound downgrade, but since Oliveira missed weight, Gaethje will hang on to his No. 11 ranking for the time being.

Usman kept on trucking at UFC 268, earning a unanimous decision triumph over Colby Covington in a championship rematch at Madison Square Garden in New York on Nov. 6. “The Nigerian Nightmare” dropped Covington twice in the second round then survived a late push in the championship frames from his opponent to close the book on his rivalry with the controversial Covington. Usman now has 15 consecutive UFC triumphs under his belt, a streak that is only surpassed by middleweight great Anderson Silva. Usman’s next title defense is expected to come against Leon Edwards.

At UFC 273, Volkanovski authored the type of leave-no-doubt performance that Hall of Fame legacies are built upon, as he overwhelmed Chan Sung Jung en route to a fourth-round technical knockout victory in the evening’s main event at Vystar Veteran’s Memorial Arena in Jacksonville, Fla., on April 9. That makes three successful featherweight title defenses and 21 straight professional triumphs overall for Volkanovski, who has established himself as one of the top pound-for-pound talents in the sport. A trilogy with Max Holloway, who was supposed to face the City Kickboxing representative at UFC 272, is expected for UFC 276 on July 2.

He took a far different route to get there, but Adesanya is nonetheless 2-0 against Robert Whittaker after defeating his rival via unanimous decision in the UFC 271 headliner at the Toyota Center in Houston on Feb. 19. With four title defenses and 11 consecutive triumphs overall at 185 pounds under his belt, “The Last Stylebender” will look ahead to his next challenge in the division. That will come during International Fight Week against No. 1 contender Jared Cannonier in the UFC 276 main event on July 2.

After missing weight by 0.5 pounds one day prior, Oliveira lost his lightweight crown as soon as his UFC 274 headlining bout against Justin Gaethje began. That didn’t prevent “Do Bronx” from putting together yet another masterful performance, as he survived some early adversity before rallying to drop and submit the former World Series of Fighting champion in the opening round of their bout at Footprint Arena in Phoenix, Ariz. The victory, which was Oliveira’s 11th straight, assures the Brazilian of a spot in the next 155-pound title fight. The Chute Boxe Diego Lima representative only seems to be getting better, with finishes of Gaethje, Dustin Poirier and Michael Chandler in his last three promotional appearances..

“Pitbull” earned arguably the most important win of his storied career on April 15, defeating A.J. McKee by unanimous decision in the main event of Bellator 277 to take back his featherweight belt. With the hard-fought rematch behind him, Bellator’s first ever four-time champion should have plenty to keep him busy, including a potential rubber match with McKee — even if it takes place at lightweight — and rising contenders like Adam Borics and Aaron Pico stringing together impressive win streaks.

After relocating to Fight Ready in Arizona, Figueiredo evened the score with Brandon Moreno at UFC 270, winning a closely contested unanimous decision in the evening’s co-main event at the Honda Center in Anaheim, Calif., on Jan. 22. In a bout where each round was difficult to score, Figueiredo’s more powerful offense might have made the difference and allowed him to regain the UFC flyweight crown. With the series against Moreno knotted up at 1-1-1, a fourth bout seems well within the realm of possibility.

After opening his career with 18 straight fights’ worth of uninterrupted and frequently breathtaking dominance, McKee tasted defeat for the first time as a professional, coming up short against Patricio Freire in their rematch at Bellator 277 on April 15. In the immediate wake of the hard-fought title bout, the "Mercenary” proclaimed himself to be done with the featherweight division, and said that any trilogy fight with “Pitbull” would have to take place at lightweight. Whether that is Bellator’s next move, or McKee ends up first facing the other “Pitbull” brother, 155-pound champ Patricky Freire, remains to be seen.