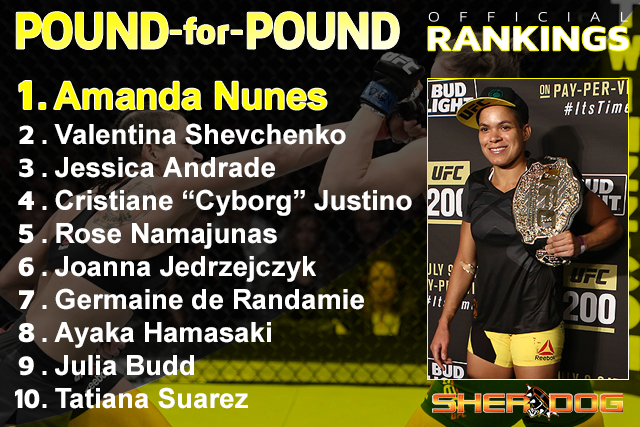 The ordering process for Ultimate Fighting Championship pay-per-views has changed: UFC 237 is only available on ESPN+ in the U.S.

Jessica Andrade is the fourth strawweight queen in Ultimate Fighting Championship history, and that accomplishment has her moving on up the Sherdog.com women’s pound-for-pound poll.

“Bate Estaca” weathered adversity for more than a round against Rose Namajunas to claim 115-pound gold in the UFC 237 headliner. Fighting on home soil in Rio de Janeiro, Andrade survived an early knockdown and a punishing jab to eventually get inside against her opponent, where she was then able to execute a devastating slam for a knockout victory in the second frame. Andrade’s feat is even more impressive considering she was coming off a one-punch KO of Karolina Kowalkiewicz in her previous bout. As a result, she climbs from No. 6 to No. 3 in our latest rankings.

Namajunas, meanwhile, is a more complicated case. While she looked quite sharp in the early minutes against Andrade, her post-fight comments don’t reflect a fighter who sounds ready to bounce back. Instead, “Thug” Rose seems to be contemplating retirement. While her future remains uncertain, Namajunas falls just one spot for now – a pair of wins over Joanna Jedrzejczyk still carries significant weight.

Nunes became just the third simultaneous two-division champion in UFC history when she knocked out Cristiane Justino in just 51 seconds to claim featherweight gold at UFC 232. Nunes needed just three seconds longer to dispatch “Cyborg” than she did when she demolished former pound-for-pound queen Ronda Rousey two years earlier at UFC 207. With a resume that also includes wins over the likes of UFC flyweight champ Valentina Shevchenko (twice), Bellator featherweight titlist Julia Budd, Miesha Tate, Germaine de Randamie and Raquel Pennington, “Lioness” has a legitimate claim to being the greatest female mixed martial artist of all time. She’ll look to add to the list with a bantamweight title defense against Holly Holm at UFC 239.

As soon as the UFC unveiled the women’s flyweight division, many pointed to Shevchenko as the division’s uncrowned queen. That forecast proved true at UFC 231, where “Bullet” authored a complete performance to take a clear-cut decision win over Joanna Jedrzejczyk and claim the vacant 125-pound belt. Up next, Shevchenko will make her first championship defense against Jessica Eye at UFC 238 in Chicago on June 8.

Andrade battled through adversity to claim strawweight gold at UFC 237. The Brazilian was confounded by Rose Namajunas in the early going of their main even bout in Rio de Janeiro, as “Bate Estaca” was bloodied and dropped by her opponent. Once Andrade was better able to close the distance, however, things changed, and she became the promotion’s fourth 115-pound queen after knocking Namajunas unconscious with a slam in the second stanza. Interesting matchups abound for Andrade, including potential foes like Joanna Jedrzejczyk, who already owns a victory against the new champion.

It took more than 13 years, but “Cyborg” finally suffered her second professional defeat.Justino was separated from her featherweight crown in emphatic fashion at UFC 232, where she suffered a shocking 51-second knockout loss at the hands of reigning bantamweight queen Amanda Nunes. The heavy-handed Brazilian remains the clear No. 2 in the division, but whether she gets an immediate rematch against Nunes remains to be seen.

Once regarded as the top female pound-for-pound talent in the sport, Jedrzejczyk now finds herself looking up at the top of two separate divisions following a loss to Valentina Shevchenko for the vacant flyweight strap at UFC 231. While the 31-year-old Poland native showed no quit in the bout, she simply had no clear answers for her opponent over the course of the 25-minute affair. Jedrzejczyk has promised a return to 115 pounds in 2019, but the question remains if the weight cut will prove too draining as she grows older — particularly after moving up a division.

De Randamie’s brief reign as featherweight champion may go down as only a footnote in UFC history, but “The Iron Lady” looks like a tough out at 135 pounds. In her first bout since February 2017, the kickboxer stymied former title challenger Raquel Pennington at every turn, earning a unanimous verdict in a featured bantamweight tilt at UFC Fight Night Denver. The Netherlands native has won four straight bouts dating back to 2015.

Hamasaki solidified her position as the world’s top atomweight at Rizin 14, where she submitted Kanna Asakura with an armbar 4:34 into the second round of their bout to claim the Japanese promotion’s inaugural 105-pound crown. Since her loss to current UFC talent Livia Renata Souza in a strawweight bout at Invicta FC 22, the 36-year-old Tokyo native has reeled off triumphs over Asakura, Mina Kurobe and Alyssa Garcia under the Rizin banner. Next, Hamasaki will defend her belt in a rematch against Invicta champ Jinh Yu Frey at Rizin 16; Hamasaki defeated Frey by doctor stoppage in their first meeting at Invicta FC 19.

Budd continued to cement her spot as the No. 2 female featherweight in the world, as she posted a dominant third-round technical knockout victory against Talita Nogueira in a title defense at Bellator 202. “The Jewel” has now won 10 consecutive fights since being submitted by Ronda Rousey in November 2011, and with finishes in two of her last three appearances, she is working to erase the “grinder” label that has been assigned to her in recent years.

Suarez has been touted as a future championship contender and she showed why at UFC 228, dominating ex-champ Carla Esparza for nearly three rounds before earning a TKO stoppage late in the fight. The freestyle wrestling ace improved to 4-0 within the Las Vegas-based promotion, giving her the longest active winning streak in the division. Suarez will lock horns with fellow contender Nina Ansaroff at UFC 238 in Chicago.