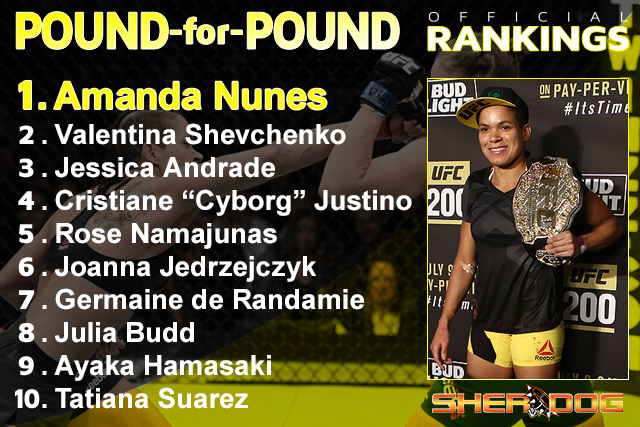 It will take more than her first loss in 13 years to send Cristiane Justino into a downward spiral.

Showing no ill effects from her knockout loss to Amanda Nunes this past December, “Cyborg” rolled to a dominant unanimous decision victory over the previously unbeaten Felicia Spencer in the UFC 240 co-headliner at Roger Place in Edmonton, Alberta, Canada, on Saturday night. The Brazilian knockout artist did have to battle through a little adversity, as Spencer opened a gash on her forehead with a slashing elbow in the opening frame and withstood a volley of powerful punches throughout the 15-minute affair.

Nonetheless, Justino solidified herself as the No. 2 featherweight in the world. Her next move will prove to be interesting, considering she completed her current UFC contract on Saturday night in Canada. If she doesn’t move on to a different organization, a return date with Nunes could be in the offing.

Nunes continued to make her case as the female “GOAT” at UFC 239, where she patiently waited for an opening before dispatching Holly Holm with a head kick and follow-up punches 4:10 into the opening stanza of their co-main event encounter at the T-Mobile Arena in Las Vegas. That makes nine consecutive victories for “Lioness,” including six in title bouts. With a resume that also includes wins over the likes of Cristiane Justino, Valentina Shevchenko (twice), Ronda Rousey, Miesha Tate and Germaine de Randamie, the next task is simply finding a suitable challenge for the two-division champion. A rematch with “Cyborg” could be on the horizon.

Entering UFC 238 as a huge favorite, Shevchenko authored a “Knockout of the Year” candidate with a head kick that instantly removed Jessica Eye from consciousness in the evening’s co-headliner. After claiming the vacant crown with a five-round verdict over Joanna Jedrzejczyk in what might be her toughest matchup at 125 pounds, Shevchenko showed why she could be destined for a lengthy reign atop the division with her first successful title defense. “Bullet” has won five of her last six promotional outings, with a narrow split decision setback in a bantamweight title clash with Amanda Nunes the only blemish on her ledger during that period. Her next belt defense will come against former bantamweight title challenger Liz Carmouche in the UFC Uruguay headliner on Aug. 10.

It was only natural to wonder how “Cyborg” would fare coming off her first defeat in more than 13 years, but the heavy-handed Brazilian bounced back nicely at UFC 240, earning a unanimous decision victory against Felicia Spencer in the evening’s co-main event in Edmonton, Alberta, Canada on July 27. It was the last fight on Justino’s UFC deal; if she re-signs, a rematch with Amanda Nunes could be on the horizon, but it’s also possible that the former Strikeforce and Invicta titlist elects to take her talents elsewhere. Regardless, Justino re-established herself as the clear No. 2 featherweight in the world..

Once regarded as the top female pound-for-pound talent in the sport, Jedrzejczyk now finds herself looking up at the top of two separate divisions following a loss to Valentina Shevchenko for the vacant flyweight strap at UFC 231. While the 31-year-old Poland native showed no quit in the bout, she simply had no clear answers for her opponent over the course of the 25-minute affair. Jedrzejczyk will return to 115 pounds for her next Octagon appearance when she faces Michelle Waterson at UFC Fight Night in San Francisco on Oct. 12.

De Randamie made a great case to be the bantamweight No. 1 contender at UFC Sacramento, where she starched the previously unbeaten Aspen Ladd in just 16 seconds in the evening’s headliner. That makes five consecutive victories for the Dutch kickboxer, a streak that also includes wins over Raquel Pennington and Holly Holm. If “The Iron Lady” wants to remain active she may have to take a fight in the interim, as it appears reigning two-division queen Amanda Nunes has designs on defending her featherweight crown next.

It took a strong third round to do so, but Hamasaki held off Invicta queen Jinh Yu Frey to win a unanimous decision in a champion vs. champion bout at Rizin 16. It was Hamasaki’s second victory over Frey – she also defeated the American under the Invicta banner – and fourth consecutive triumph overall. The 37-year-old Tokyo native has also bested Kanna Asakura, Mina Kurobe and Alyssa Garcia in Rizin bouts.