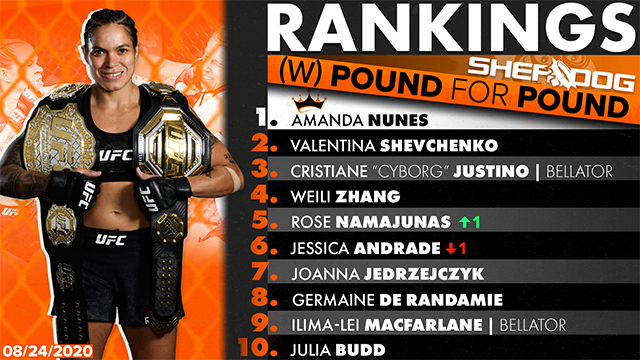 The strawweight division is much more interesting with Rose Namajunas in it.

After being slammed on her head and contemplating retirement in 2019, “Thug” Rose made a triumphant return to the Octagon at UFC 251, as she gained a measure of revenge with a split-decision victory in a rematch against Jessica Andrade. Footwork, movement and accurate striking carried Namajunas, who looks like an interesting potential foil for reigning strawweight queen Weili Zhang. While the series between Namajunas and Andrade is currently tied at 1-apiece, recency bias allows for the Trevor Wittman protege to swap positions with her Brazilian rival in our latest pound-for-pound poll.

Nunes was completely dominant against Felicia Spencer in the UFC 250 headliner, winning a lopsided unanimous verdict that wasn’t as close as the judges’ scorecards (50-44, 50-44, 50-45) indicated. That makes 11 consecutive triumphs for Nunes, who joins Daniel Cormier and Henry Cejudo as the only two UFC fighters two successfully defend titles in two different weight classes. “Lioness” is having a baby with her wife, UFC strawweight Nina Ansaroff, and has expressed a desire to spend the remainder of 2020 on the sidelines while she focuses on her family.

Shevchenko continues to look unstoppable in the UFC women’s flyweight division. “Bullet” absolutely overwhelmed Katlyn Chookagian in the UFC 247 co-main event in Houston, eventually trapping her opponent in a mounted crucifix and raining down strikes for a technical knockout stoppage at the 1:03 mark of the third round. Shevchenko has won five straight since dropping a closely-contested split verdict to Amanda Nunes at UFC 215. Her next title defense is expected to come against Joanne Calderwood.

A devastating slam KO defeat to Jessica Andrade at UFC 237 had Namajunas contemplating retirement, but ultimately “Thug” Rose decided against calling it a career. The former champion made a triumphant return to the Octagon at UFC 251, where she racked up on early lead on the scorecards and held off a hard-charging Andrade down the stretch for a split-decision triumph at “Fight Island” in Abu Dhabi. While a trilogy with Andrade could be in store someday, Namajunas likely earned herself a shot at regining 115-pound champion Weili Zhang.

Andrade struggled to solve the Rose Namajunas puzzle for two rounds at UFC 251, but “Bate Estaca” made things interesting with a rally in the third round of their strawweight rematch in Abu Dhabi. Unfortunately for Andrade it wasn’t enough, as the Brazilian dropped a split decision to Namajunas in contest that earned “Fight of the Night” honors. After winning seven of eight UFC appearances June 2016 to May 2019, the Brazilian has dropped back-to-back fights in the Octagon..