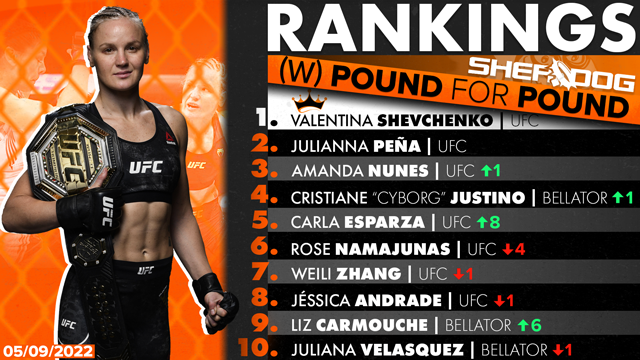 
With the exception of Carla Esparza, the UFC 274 co-main event was a fight to forget for everyone involved.


Advertisement
Esparza claimed strawweight gold for a second time in her UFC career with a lackluster split-decision triumph over Rose Namajunas on Saturday at the Footprint Center in Phoenix, Ariz., her sixth consecutive triumph within the Las Vegas-based promotion. Neither fighter stood out during the 25-minute affair, which was characterized primarily by an reticence to engage on both sides. Ultimately, Esparza did just enough in the eyes of the judges, and with that, she climbs from 13th to fifth in Sherdog’s latest poll, while the perplexing Namajunas falls from second to sixth.

Elsewhere, Julia Budd dropped a unanimous decision to Genah Fabian at a Professional Fighters League regular season event on Friday in Arlington, Texas. Since Fabian missed weight, Budd doesn’t get punished for the defeat as much as she normally would — though her hold on pound-for-pound positioning is tenuous at best going forward.

Shevchenko added another scalp to her collection in the UFC 266 co-main event, gradually building to a fourth-round stoppage of Lauren Murphy at the T-Mobile Arena in Las Vegas on Sept. 25. That’s six consecutive title defenses — and eight straight victories overall — for “Bullet,” who is well-established as the greatest female flyweight in UFC history. With victories over the likes of Murphy Jessica Andrade, Katlyn Chookagian, Liz Carmouche and Jessica Eye, Shevchenko is working on cleaning out the 125-pound weight class. Her next assignment will come against streaking Brazilian Taila Santos at UFC 275.

Pena entered UFC 269 as a massive underdog, and she exited the event with the biggest upset of 2021 along with the bantamweight title in tow. A tenacious Pena survived a slugfest with Amanda Nunes and when her Brazilian foe fatigued, “The Venezuelan Vixen” capitalized with a takedown and rear-naked choke submission. Pena, who is victorious in seven of nine Octagon appearances, will coach against Nunes on “The Ultimate Fighter 30” before facing the Brazilian in a bantamweight championship rematch later this year.

Nunes was a victim of 2021’s biggest upset at UFC 269, as she suffered a second-round submission loss to Julianna Pena in the evening’s co-main event at the T-Mobile Arena in Las Vegas. Nunes emptied her gas tank in a firefight against “The Venezuelan Vixen” in Round 2, and once she was unable to get the knockout, she succumbed to a rear-naked choke to relinquish the bantamweight belt. Nunes will coach opposite Pena on “The Ultimate Fighter 30” before attempting to regain her title in a rematch later in 2022.

It took a little bit longer than their first meeting, but “Cyborg” nonetheless improved to 2-0 against Arlene Blencowe with a unanimous decision triumph in the Bellator 279 main event at Neil S. Blaisdell Arena in Honolulu, Hawaii, on April 23. The reigning featherweight queen has won six straight since her shocking loss to Amanda Nunes in December 2018 and still looks to be head and shoulders above the 145-pound field in Bellator. A potential cross-promotion with, say, the PFL for a superfight with Kayla Harrison would be quite intriguing, however. Whether that’s realistic remains to be seen.

More than seven years after becoming the UFC’s inaugural strawweight title holder, Esparza can call her herself a champion again following a split-decision triumph over Rose Namajunas in the UFC 274 co-main event. It may have been one of the least compelling fights in recent memory but don’t tell that to Esparza, who has won six straight outings and is 2-0 against “Thug” Rose. To top it all off, “Cookie Monster” will have a shiny belt to bring to her wedding, which takes place one week after UFC 274.

Namajunas gave one of the most perplexing performances by a defending champion in recent memory, as she refused to engage for the majority of 25 minutes against Carla Esparza in a split decision loss in the UFC 274 co-main event. Though Esparza didn’t do much to force the issue, the “Cookie Monster” did just enough to get the nod from two cageside judges and improve to 2-0 against “Thug” Rose. In the aftermath, Namajunas was adamant that she did enough to deserve the victory, but after such a forgettable fight, it’s hard to envision the UFC being eager to book a trilogy anytime soo.

Zhang had a far better showing the second time around against Rose Namajunas, but she nonetheless wound up on the wrong end of the scorecards in a split decision loss in the UFC 268 co-main event. While it wasn’t nearly as discouraging as a head kick KO defeat, Zhang falls to 0-2 against Namajunas, which means she may need another champion to be crowned to be a factor in the title picture anytime soon. Regardless, the 32-year-old Chinese standout is well established as one of the top 115-pound talents in the sport and will be a tough out for most anyone in the division. Next, Zhang will run it back against Joanna Jedrzejczyk at UFC 275 in a rematch of one of the greatest women’s bouts of all-time.

After a three-bout stint at 125 pounds that saw her fail in a bid to capture championship gold against Valentina Shevchenko, Andrade made an impressive return to strawweight with a first-round submission of surging contender Amanda Lemos in the UFC Fight Night 205 main event on April 23. Not only did Andrade reassert herself as a person of interest in the division, but she also authored the first standing arm-triangle choke submission in the history of the Las Vegas-based promotion. Andrade is one of the most accomplished fighters in UFC history, with 14 career wins ranging from 115 to 135 pounds..

When it comes to making good on championship opportunities, the third time was the charm for Carmouche, who came up short in title bouts against Ronda Rousey and Valentina Shevchenko before claiming flyweight gold with a stoppage of Juliana Velasquez in the Bellator 278 main event. The Team Hurricane Awesome product survived an early knockdown before taking Velasquez down and advancing to a mounted crucifix, where she hammered away with elbows to secure a technical knockout victory in the fourth round. Carmouche was likely behind on the scorecards before the controversial finish, which could mean a rematch could be in store sooner rather than later.

Velasquez appeared to be on the right track to victory through three rounds against Liz Carmouche in the Bellator 278 headliner, but that all changed when “Girl-Rilla” secured a mounted crucifix and rained down elbows to force a stoppage with 13 seconds remaining in the period. While Velasquez didn’t appear to be in danger from the strikes, her unblemished record is no longer, and she’ll have to wait and see if the controversial nature of the stoppage grants her an immediate rematch.