The problem with perfect records is their limited shelf life: no one can depend on being undefeated in order to remain an attraction. Fight enough and you will eventually run into someone who has answers for everything you have and questions you can’t address.

Bobby Lashley and Muhammed Lawal both had their pristine careers tarnished Saturday: Lawal was unable to hold down the relentless Rafael “Feijao” Cavalcante, while Lashley somehow managed to lose a fight he was winning virtually every minute of up until that point.

It’s hard to know who suffers more: that Lashley lost is not too surprising, though few expected it to be against Chad Griggs -- a man so far off the industry radar that Lashley hadn’t even seen tape of his opponent. Lawal, meanwhile, was perceived as one of the top athletes in the sport and had broken into the top 10 with a win over Gegard Mousasi. Losing to Cavalcante, who is barely a year removed from a KO loss to fringe player Mike Kyle, means we either underestimated the Brazilian or severely overestimated the former champion.

With Lawal’s confidence both in and out of the ring -- his hands-at-hips striking style has the arrogance of Roy Jones without the ability -- it’s easy to forget he’s barely two years into a fight career. But Lashley, always impatient to have a crack at Fedor Emelianenko or a current champion, may be more easily intimidated by finding out he’s human.

In either case, they both proved a point worth repeating: anyone in the business of promoting invincible fighters isn’t going to be in business for long.

Next for Lawal: A confidence-rebuilder against Kevin Randleman.

Next for Cavalcante: An opportunistic Mousasi.

Next for Lashley: Andrei Arlovski and a guaranteed win for someone who needs it.

Next for Griggs: Brett Rogers.

Next for K.J. Noons: Gilbert Melendez. 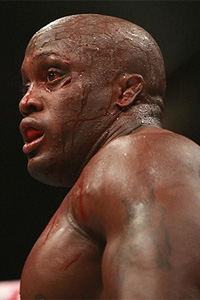 Lashley, who earned his name recognition from a WWE tour several years ago, insisted his NAIA wrestling credentials were more suited for real fighting. But since debuting in 2008, the barn-sized fighter has earned a reputation for being an abrasive and unreasonable personality: despite not having a single valuable win to his credit, he talked repeatedly of fighting for a championship. For someone with such lofty goals, he also went nearly seven months between Strikeforce appearances and even took on a part-shift obligation to TNA wrestling -- a senseless proposition for anyone truly serious about competition.

With a loss to Griggs, Lashley has lost his “Lesnar Light” status and now becomes another struggling contender. Aside from an easy-money fight with former WWE associate Dave Batista, he probably won’t be sniffing a title bid anytime soon. Whether that’s enough to make him move on is the question that’ll bounce around his head for the better part of the next few months.

Is Noons just getting warmed up?

Noons, 27, is unique in MMA’s lightweight division for having several pro boxing bouts to his credit. While those hands didn’t look too formidable in his two most recent bouts after a two-year hiatus -- both of them decision wins -- Noons blasted Jorge Gurgel Saturday with a one-two combination that should make future opponents at least a little shy about trading with him.

While he has confidence in his hands, a postfight mention of wanting to face Floyd Mayweather is ridiculous on any level but financial: he’s obviously angling for a payday. (Fortunately for him, an opponent with little chance of winning is right up Mayweather’s alley.) If Noons can ward off some of the better wrestlers in Strikeforce -- most notably Gil Melendez and Josh Thomson -- he’s going to be a problem.

Should Texas be a no-fight zone?

The display of questionable officiating during Saturday’s Strikeforce event comes down to one key fact about the Texas State Athletic Commission: there’s no such thing as a Texas State Athletic Commission. Instead, the state’s Department of Licensing and Regulation is responsible for oversight of boxing and mixed martial arts: a seven-member board dictates policy on fight sports and 28 other industries, including electricians and auctioneers. Contrast that with a state like New Jersey or Nevada, which employs at least one full-time commission member whose sole duty is to audit prizefighting.

Among their flubs: Lashley was struck multiple times in the back of the head in the climax of the Griggs fight; Noons blasted Gurgel with an illegal knee to punctuate his fight-ending finish; and no drug tests were performed on any of the athletes.

The sport is plenty dangerous even with immaculate oversight: it has no room for a state that can’t devote its full authority to regulating it.


8,635 was the final attendance number for the Toyota Center, according to MMAJunkie.com. The figure was bolstered in part by Houston’s Noons and neighboring Oklahoma State wrestler Lawal, who had the crowd chanting “King…Mo!” like they were under hypnosis…Lashley was seen on a stretcher following his loss to Griggs, but was released from the hospital early Sunday morning, according to reports. There are already calls for Lashley to drop some of the massive muscle devouring oxygen, but when your main asset is ridiculous power, that’s like asking Anderson Silva to stop kicking…Nick Diaz was announced as the headlining attraction for an Oct. 9 event in the promotion’s home base of San Jose. While Diaz is their welterweight champion, there’s no guarantee he’ll defend that belt considering the promotion’s imaginative approach to matchmaking. A Diaz/Joe Riggs trilogy capper -- if you count their hospital fight of legend -- seems the most realistic, though I remain in high support of a Diaz/Cung Le Superfight…Josh Gross reports that the company is still debating whether to make a long-discussed eight-man tournament a single-night affair or spread it over multiple shows. There is no novelty to the former, which is essentially what every company does already. While tournaments are usually a mess, there’s spectacle to be found in a single-evening, three-fight format. And spectacle is what Strikeforce needs.