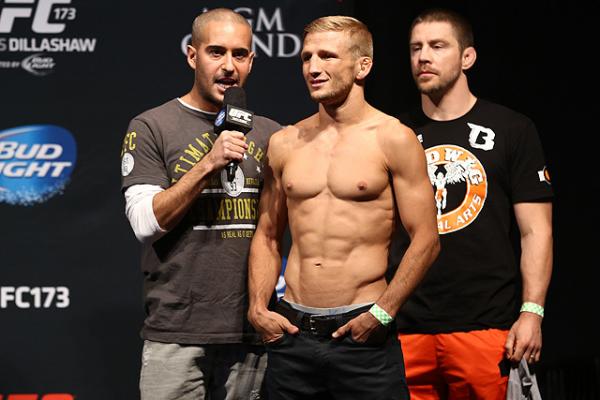 The Team Alpha Male export stopped Renan Barao on a fifth-round technical knockout to capture the Ultimate Fighting Championship bantamweight title in the UFC 173 headliner on May 24 at the MGM Grand Garden Arena in Las Vegas. Barao succumbed to the blows 2:26 into round five, as he was beaten for the first time since April 14, 2005.

Dillashaw pieced together a virtuoso performance over four-plus rounds. The 28-year-old Californian floored Barao with an overhand right roughly 90 seconds into the match and never looked back. From that point forward, the Brazilian was on his heels. He had no answer for Dillashaw’s lateral movement and multi-strike bursts, absorbing blows to the legs, body and head.

A finalist on Season 14 of “The Ultimate Fighter,” Dillashaw put his signature on the masterpiece in round five. There, he rattled Barao with a savage head kick, swarmed with punches and dropped him with a left hook. An unanswered volley of punches and hammerfists brought it to a close.

Dillashaw has won six of his last seven fights. Even though he entered round five with what appeared to be a significant lead on the scorecards, he never relented. The defeat halted Barao’s streak of 22 straight wins.