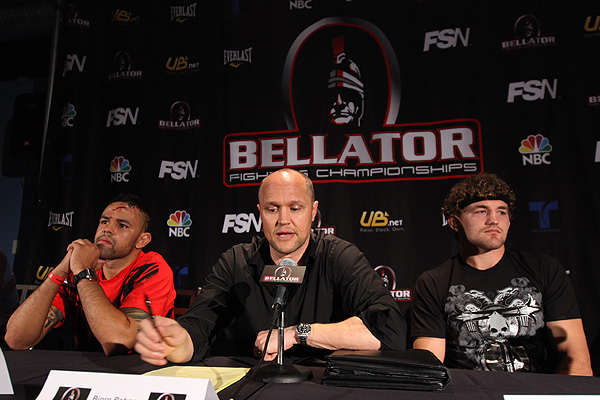 
Bellator MMA on Friday marks the sixth anniversary of its first event in 2009 and its first full year under new president Scott Coker. For a promotion that has undergone constant evolution since its early days as principally a Spanish-language telecast on ESPN Deportes, Coker reshaping the direction of the company is nothing new. Arguably more than any other MMA organization in history, Bellator has been defined by change. It is that malleability that has allowed Bellator to survive and thrive as MMA’s No. 2 promotion while so many others have fallen by the wayside.

When Bjorn Rebney founded Bellator MMA in 2008, the big hook was tournaments. They were marketed as a way to allow fighters to control their own destiny rather than leaving themselves at the whims of promoters. In reality, it was a savvy vehicle to make stars out of unknown fighters on a budget. Tournaments make it harder to protect and groom big-name fighters, but if you lack big names to begin with, they add prestige and notoriety that do not necessarily come with a three-fight winning streak over other unknown fighters. In another smart touch, Bellator added a $100,000 incentive for winning a tournament, reducing the risk of fighters pulling out of competition due to injury and ruining the brackets.

Now boasting a roster of higher-paid and better-known fighters who can attract audiences when matched with each other, Bellator may have outgrown the tournament concept. However, tournaments were an important asset that allowed Bellator to build itself on a budget without breaking the bank on big-money free agent signings.

The talent accumulated for the first four tournaments during Bellator’s inaugural season was in hindsight a subpar lot. Many of the younger prospects did not pan out as expected, while few of the older fighters revitalized their careers. The standouts were precisely the ones expected going in, notably a 25-year-old action fighter from Philadelphia.

Eddie Alvarez was Bellator’s big initial signing, and Bellator landed him despite interest from every other major MMA organization in the world. His 15-2 record and success for Dream and Bodog Fight established him as a top lightweight talent, and he had the added positives of a crowd-pleasing style and a Hispanic background for the ESPN Deportes audience. He was the poster boy for Bellator and delivered as expected, taking all three of his fights via submission to win the first Bellator lightweight tournament.

The other significant success story of the first Bellator season was Hector Lombard, also no secret to informed MMA fans. Lombard’s attempts to get into the United States to fight had gone on for years. Bellator to its credit cleared up those longstanding visa issues. Lombard made it into Bellator’s first middleweight tournament and knocked out all three opponents. He went 8-0 in Bellator, with seven wins via knockout or technical knockout, before signing a big-money contract with the UFC. 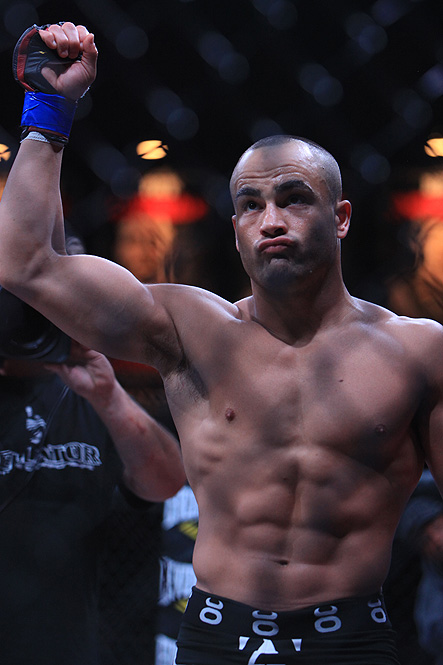 Photo: D. Mandel/Sherdog.com
Alvarez did not disappoint.
The other two tournament champions were solid fighters but would not rise to the same heights as Lombard and Alvarez. Lyman Good won the welterweight tournament and thrived before Ben Askren ended his undefeated record, while Joe Soto won the featherweight tournament and later fought T.J. Dillashaw for the Ultimate Fighting Championship bantamweight crown in the improbable UFC 177 main event. However, it was another fighter who arguably made the biggest mark of all in the early days of Bellator: Toby Imada.

It is easy to forget given its current status, but Bellator was an afterthought in the minds of even many hardcore MMA fans in 2009. The fights aired in Spanish on tape delay on a channel few households had. There was not a lot of early buzz for the promotion until a remarkable fight took place in the second round of the lightweight tournament.

Jorge Masvidal, a highly regarded 17-3 striker with knockout wins over Yves Edwards and Joe Lauzon, was a heavy favorite against 23-13 journeyman fighter Imada.

Masvidal was getting the better of the action, making a mess of Imada’s face with his strikes, when Imada grabbed an inverted triangle choke from the standing position. Masvidal collapsed backwards unconscious in one of the most spectacular submissions in MMA history. Video of the submission spread quickly via YouTube and outlets like Inside MMA, and Imada was surprisingly one of the biggest stars coming out of Bellator’s first season.

While some MMA promotions have historically filled their undercard with random local fighters, Bellator from the beginning sought to groom future contenders. Unfortunately for Bellator, at least in the early going, those fighters ended up being groomed for other organizations. Later on, those undercards featured fighters who went on to compete in tournaments and achieve greater success for Bellator.

After the first season of Bellator, from April to June 2009, the promotion went on a long hiatus and did not return until the following April. When it did, Bellator in many ways put down the foundation that still exists today. Bellator in its second season went live, like it is today. It aired on Fox Sports Net, a channel accessible to large numbers of English-language viewers. Inside the cage, familiar fighters emerged up and down the cards. 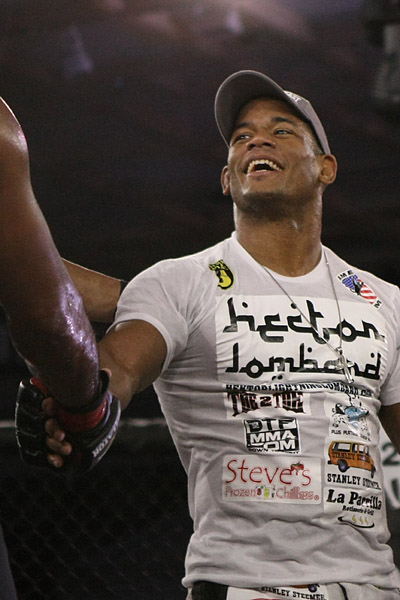 (+ Enlarge) | Photo: Keith Mills/Sherdog.com
Lombard was a force.
The next round of tournaments established many of the promotion’s top stars. Joe Warren won the featherweight tournament, and his brash trash talking made him one of Bellator’s signature personalities. He defeated Patricio Freire in the final of that tournament; Freire, the current Bellator featherweight champion, remains one of the organization’s best fighters and one of the world’s elite 145-pound fighters.

Askren, another outspoken personality, won the Season 2 welterweight tournament with his world-class wrestling and went 9-0 in Bellator before Bellator and the UFC both decided not to sign the “Funky” one. He left for One Championship in Asia. Pat Curran won the lightweight tournament and remains one of the promotion’s best fighters, now competing in the featherweight division.

Alexander Shlemenko won the middleweight tournament and continues to compete in big fights for Bellator today against the likes of Tito Ortiz and Melvin Manhoef. Even outside the tournaments, other future building blocks like Daniel Straus, Cole Konrad and Zach Makovsky debuted.

Bellator also established the policy of putting its champions in non-title super fights while they waited to defend against future tournament winners. The champions did their part by winning those super fights.

In spite of all those debuting fighters, perhaps the biggest debut for Bellator in that second season came outside the cage. For the first season of Bellator, Jon Anik and Jason Chambers provided the English-language commentary. With Season 2, Bellator switched to the former M-1 Global team of Sean Wheelock and Jimmy Smith. Wheelock and Smith’s knowledge, chemistry and enthusiasm make them MMA’s best commentary team and one of Bellator’s top assets to this day. 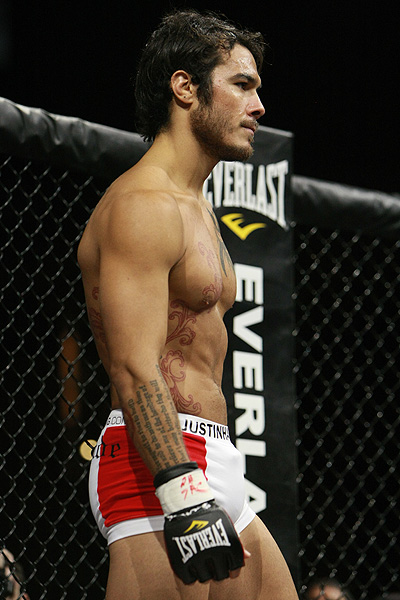 (+ Enlarge) | Photo: D. Mandel/Sherdog.com
Huerta fell short.
Despite all of the successful debuts in the second season of Bellator, the debut that was supposed to be the biggest of them all fizzled. Roger Huerta, a young fighter with good looks and an exciting fight style, was supposed to be one of the UFC’s biggest future stars at one point. However, after he became the first MMA fighter to appear on the cover of Sports Illustrated, he developed a reputation behind the scenes for having a big head. The UFC put him in some tough matchups, and when he lost, it cut ties altogether with Huerta.

Bellator went after the aspiring star aggressively. Huerta, still 20-3-1, was thought to be a top-level lightweight. Like Alvarez, he was a Hispanic star, and that was a market Bellator continued to court. Bellator wanted to make a few targeted big-money signings and Huerta at the time was perceived to be the most significant of the bunch. It was likely the biggest flop in company history. Huerta lost his second tournament fight to Curran and then lost again to Alvarez. Huerta departed Bellator with a 1-2 record and has only won two MMA fights since leaving the UFC in 2009. Bellator learned it had to be careful in selecting fighters in which to invest on a shoestring budget.

Finish Reading » The biggest change in Bellator has come in its approach to talent. Over time, Bellator has evolved from a “seller” to a “buyer.” The change did not come all at once, and it accelerated when Coker was put in charge. Rebney’s initial approach was to create new stars, signed at affordable contracts. When those stars grew in prominence, many of them ended up leaving the company, from Alvarez and Lombard to Askren and Konrad. Signing a roster of high-paid talents has led to the demise of countless MMA promotions.