“It feels amazing especially to fight a guy like Dave Jansen. I know we did a lot of talking before the fight, but I think that’s just a lot of emotions. When you’re fighting for a title your emotions get to a different level than they typically would for other fights,” Brooks said. “Dave Jansen showed his warrior spirit tonight. I hit him with some hard shots, and I felt like I was going to break my hand. That guy is tough as hell.”

Jansen came out firing on all cylinders in round one, and his offensive aggression – which included some solid knees and elbows in the clinch -- appeared to have Brooks on his heels. However, while Brooks became more comfortable as the bout progressed, Jansen’s overall output decreased with each passing round.

“Ill Will” consistently connected with hard right hands and kicks to the body at range, and when Jansen attempted to initiate the clinch, Brooks responded with uppercuts and knees. In addition, the American Top Team product continued to utilize the sparkling takedown defense he displayed in his previous two bouts with Michael Chandler, as Jansen was unable to drag his foe to the canvas.

While Brooks was the quicker, more efficient fighter for the bout’s final 20 minutes, he wasn’t completely satisfied with his performance.

“I think there’s a lot of things that I could have did a lot better, but I’m always judging myself the hardest,” he said. “I’m gonna get back in the gym and continue to try to get better, do a better job at really taking advantage of opportunities and finishing guys.”


Rafael Carvalho played the percentages against Joe Schilling, and while that might not have been the most entertaining approach, he was rewarded with victory for his efforts. 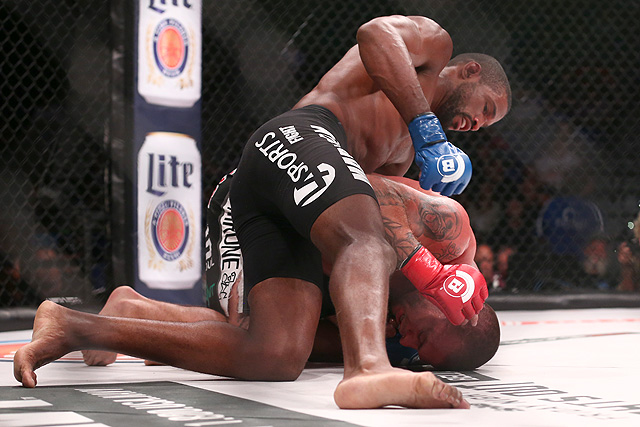 (+ Enlarge) | Photo: D. Mandel/Sherdog.com
Carvalho's wrestling carried him past
Schilling's striking game.
What was initially billed as a striker’s delight turned into an indictment of Joe Schilling’s takedown defense, as Carvalho largely controlled the battle for position en route to a split-decision triumph in the evening’s middleweight co-main event. Judge Michael Bell scored it 30-27 for the Carvalho, and Marcos Rosales had it 29-28 for the Brazilian, while Mark Smith saw the fight 29-28 in favor of Schilling.

It quickly became evident that Carvalho (11-2, 2-0 Bellator) was not interested in exchanging with Schilling (2-4, 1-1 Bellator) for prolonged periods. Instead, he did his best to neutralize the Glory vet’s vaunted power in the clinch and on the mat.

Schilling had a surprising answer for his foe’s approach early on, when he successfully executed a hip bump sweep after being taken down in the opening frame. However, Carvalho was gradually able to assert his will down the stretch with takedowns and top control for the majority of the final 10 minutes. Schilling had one final chance to turn the tide in his favor when he briefly buckled the Brazilian with a right hand early in the third round, but Carvalho was quick to recover. That turned out to be Schilling’s last hurrah, as Carvalho eventually landed a trip takedown and maintained control as time expired.


Marcin Held has an uncanny knack for putting an unsuspecting opponent on the defensive in a matter of moments. That skill was especially pronounced against an ultra-aggressive Alexander Sarnavskiy in a battle of lightweight contenders. 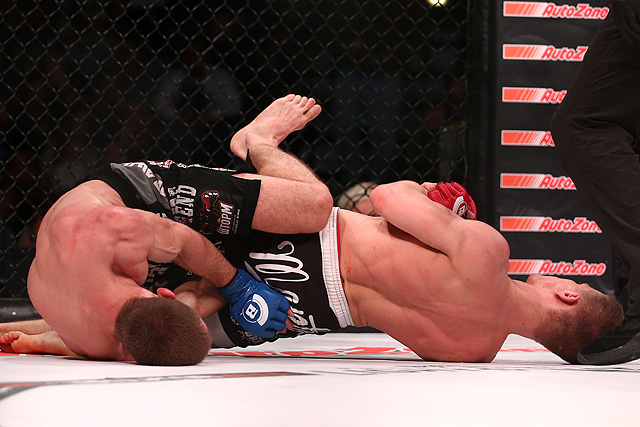 (+ Enlarge) | Photo: D. Mandel/Sherdog.com
Held flexed his amazing leglock game.
Held (21-3, 10-2 Bellator) submitted his foe with a third-round kneebar, when an audible “Tiger” yell forced referee John McCarthy to intervene on the Russian’s behalf at the 1:11 mark of the period. It was Held’s 12th career triumph via submission.

All too often Sarnavskiy (30-3, 5-3 Bellator) played directly into his opponent’s hands by rushing into takedown range. Held was only too happy to oblige by dragging his man to the mat, and in a grappling-heavy affair, the Pole busted Sarnavskiy open with an elbow from above in round two while offering his usual plethora of transitions and submissions throughout.

Held was finally able to put Sarnavskiy away after his opponent clipped him with a left hand during an exchange near the fence early in round three. From there, Held was able to grab a hold of “Tiger’s” leg and drop to the ground, where he deftly switched from a toe hold to the fight-ending submission.

Johnson Grinds Out Victory Over Volkov


American Kickboxing Academy product Tony Johnson made a statement in his second Bellator appearance, as he grinded out a split decision over former heavyweight titlist Alexander Volkov in the evening’s opening main card bout. Judges Marcos Rosales and Mark Smith saw the bout 29-28 in favor of Johnson (9-2, 2-0 Bellator), while Michael Bell submitted a 29-28 scorecard for Volkov (24-5, 6-2 Bellator).

Johnson rarely allowed the 6-foot-7 Volkov’s reach advantage to become a factor. The former Iowa State University fullback maintained consistent pressure throughout, either by pressing his foe into the fence or taking him to the mat. While Johnson’s offensive output in those positions wasn’t great, he usually stayed just busy enough to satisfy referee Mike Beltran. Volkov, meanwhile, didn’t help his cause by moving straight backward instead of taking angles when Johnson attempted to close the distance.

The Russian was most effective in the final frame, when he thwarted Johnson’s takedown tries and punished him with knees from the clinch. However, it was too little too late for the Rusfighters Sport Club representative, as Johnson managed to survive his foe’s late surge to get the win. 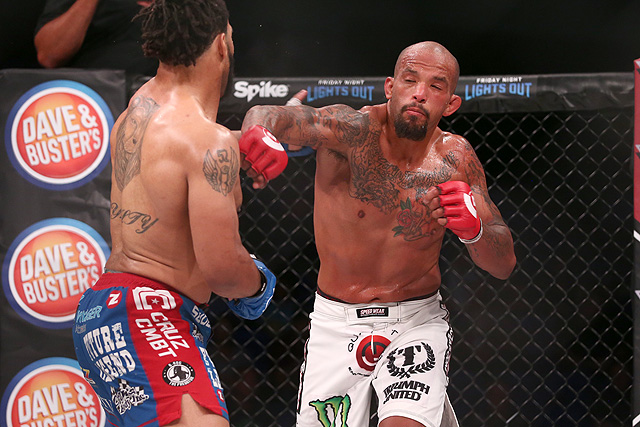