MMA aficionados remain divided on Sengoku’s place in MMA. While many have lauded the upstart promotion for its less gimmicky booking and use of underrated and overlooked international competitors, others have preferred the greater star power of Dream and lamented the lack of interesting matchups for Sengoku’s stars.

Now 10 months into its MMA project, World Victory Road bless us with its fourth Sengoku offering Sunday at the Saitama Super Arena in Saitama, Japan, which should more clearly crystallize Sengoku’s home in the MMA universe.

Takanori Gomi (Pictures) is back, and he is joined by a cast featuring the muscle of Tagg Radio, two Olympic gold medalists and one stone-cold South Korean. The road to Gomi begins, too, as Sengoku kicks off an eight-man tournament with some of the sport’s best lightweights you may have not yet seen, all vying for a crack at the “Fireball Kid” and the chance to become Sengoku’s first lightweight champion later this year.

If that’s not good enough for you, the promotion also has a hilariously epic ring announcer with a set of pipes that would put Bruce Buffer on the World Poker Tour permanently.

A guy with a glass eye against a rambunctious midget in spandex pants may sound more like a scene cut from the “Family Guy” than a high-level mixed martial arts bout. But make no mistake, Kitaoka and French have earned their spots in the bracket.

French rides an eight-fight winning streak into the tournament, including his King of the Cage title capture against Mac Danzig (Pictures) in January 2007. A former Eastern Illinois University wrestler, he is coached by EIU’s most notable alum -- longtime UFC welterweight champion Matt Hughes (Pictures). Incredibly, the still-improving 27-year-old prospect has compiled his 16-2 mark with a glass eye; it’s hard to bag on a guy who schools dudes with a glass eye.

In opposition, he’ll find Kitaoka, a one time amateur Shooto washout, turned Pancrase welterweight prospect turned internationally intriguing lightweight. He was scheduled to be part of Pride’s aborted 2007 lightweight grand prix but officially made his divisional debut at Sengoku’s May offering, choking out rugged Aussie Ian James Schaffa (Pictures) in the first round. A combative compatriot of Shinya Aoki (Pictures) and Masakazu Imanari (Pictures), Kitaoka's aggressive and outstanding submission game may make him the best pure grappler in the tournament.

Although French has continued to improve in each outing, he’s in for a stylistic nightmare. Kitaoka’s striking is still certifiably terrible and a major sprawl-and-brawler could capitalize. However, French doesn’t have that level of striking. The only way for him to generate real offense is on the ground, where he’s almost dead certain to get submitted. Kitaoka is also powerful enough to put French on his back, which would signal a near-instant end to the fight. While Kitaoka refuses to budge on his secret to submitting foreign fighters, French will be unfortunately due for Kitaoka’s guillotine-or-leglock ultimatum, and it may not take long. 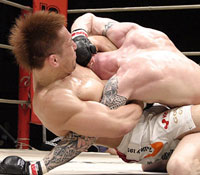 Stephen Martinez/Sherdog.com
Eiji Mitsuoka (left) chokes Joachim
Hansen at Shooto's 'Back To Our
Roots 6' on Nov. 8, 2007.
Quite frankly, if you don’t like this fight, you suck.

A Brazilian jiu-jitsu world champion with a few Brazilian national wrestling titles tossed in for good measure, Damm is a serious grappler who has put those skills to good use in his young career. However, over his last three outings, Damm has focused on rounding out his game and showing off his striking. Although that move did not seem like the best tactical choice heading into a fight with touted banger Jorge Masvidal (Pictures) in June, Damm survived an early knockdown to come back and drop “Gamebred” in the second round to earn a surprising stoppage.

After abject mediocrity in his early career, Mitsuoka was an unlikely candidate to do anything notable in the MMA world. Instead, he has turned into a criminally underrated lightweight, even in the wake of his upset victory last November over current Dream king Joachim Hansen (Pictures). Mitsuoka’s only blemish in the last two and a half years -- a split decision loss to Kotetsu Boku (Pictures) last September -- was a silly decision that ought to have swung the way of the massively improved Wajyutsu product.

Mitsuoka’s striking is technical, but he sticks to textbook basics, seldom going outside the jab, simple combos and low kicks. While Damm has shown some power, he is not going to be technically proficient enough to set up the KO on his own, and Mitsuoka won’t be aggressive enough to give him the counter opportunity. However, while both should be able to put together some decent strikes, the battle will be won and lost on the floor. Damm is a great takedown finisher and moves smoothly to dominant position. Mitsuoka has a quick-and-deadly single leg takedown, good top control and great ground-and-pound.

If it were in a cage, where he thrives with elbows and the ability to dirty box effectively, I would be more inclined to pick Mitsuoka to win. However, while the rule set does not make all the difference in the world, in a matchup where the decision will likely be razor thin, it will make enough of one. Damm should be able to get some takedowns of his own, and when he does, he’ll achieve better position due to his guard passing. The slight positional variance should curry enough favor to win by a nose on the cards and stamp the Brazilian as an early tournament favorite.

Four years after a string of brutal losses robbed him of prized prospect status, Schultz has stormed back to lightweight relevance with a sensational six-fight winning streak and an International Fight League title. After Schultz took a well-earned, workmanlike decision over talented Deividas Taurosevicius (Pictures) in May, MMA’s favorite team-based money pit could no longer bear the bank-breaking burden and closed up shop. However, Schultz was quick to parlay his recent run into a sweet deal with Sengoku, including a spot in its lightweight tournament.

Hype lost and re-found is a theme not lost on his opponent. An All-Japan amateur Shooto champion in 2004 and a Shooto rookie champion a year later, Hirota began his career at 6-0 and looked to be part of the next generation of great Shooto lightweights. Instead, he was soundly defeated when he stepped up in competition against Takashi Nakakura (Pictures) and Ganjo Tentsuku (Pictures). After trading in the ropes for the fence in Greatest Common Multiple’s Cage Force series, Hirota has rejuvenated himself with three straight stoppages. He became Cage Force’s lightweight champion with a brutal 60-second starching of Tomonari Kanomata (Pictures) in April.

Schultz is a favorite, and with good reason -- he is bigger, stronger and a better wrestler. Although Hirota prefers to strike, his body lock takedowns and ground-and-pound are parts of his arsenal that will largely be nullified. Schultz has fantastic takedown defense, great balance and does his best striking from the clinch. Even if Hirota can stay off of his back, which is unlikely, one of the major aspects of his game is essentially taken away.

If there is a hope for Hirota, it’s his hands. Incredibly, Hirota has only recently started taping his hands for fights, a move that has coincided with his three-fight KO streak. Schultz’s biggest weakness in the past has been getting caught with heavy artillery standing. If he’s too eager to flex his striking at range, Hirota can blast him in the same fashion Chris Horodecki (Pictures) and Bart Palaszewski (Pictures) were able to. However, a lunch pail-style clinch, takedown and ground-and-pound clinic is the likely outcome, as Schultz takes a unanimous decision, although it may not bring the kind of excitement that his training partner Matt Horwich (Pictures) would term “way awesome.”

A Grabaka product, Yokota and his Slovenian opponent, Kosednar, arrive out of similar circumstance. Yokota quietly put together a quality resume over his four-year career but is rebounding from his first defeat as a pro. He was plunked by one half of this event’s main event -- Seung Hwan Bang (Pictures) -- who took Yokota’s Deep lightweight title in May. Likewise, Kosednar put together six straight victories to start his career, but “Zelva” was viciously stopped by Paul Daley (Pictures) last month in his first step up in class.

In only a year as a pro, Kosednar has developed a respectable level of well-roundedness. However, he remains reliant on his Judo background to get the fight to the floor and initiate his power top game. Therein lies the rub for the 25-year-old, as Yokota, a former Judoka himself, is stronger technically in the clinch with some nasty throws of his own and should be able to stop Kosednar’s leg attacks from the outside, forcing a stand-up fight.

While Kosednar’s stand-up has improved from his first bouts, he is still very much a novice on the feet, as Daley showed. Meanwhile, Yokota’s stand-up is far better than the loss to Bang would indicate, as he has spent time in Thailand and beaten an A-level kickboxer in Faldir Chabari in a Shoot Boxing bout.

Look for Yokota to show off his technical striking supremacy en route to a comfortable decision. Yokota won’t be going past the semi-finals, no matter who his opponent is, but he should be able to at least acquit himself well enough in this bout to validate his presence in the tournament.