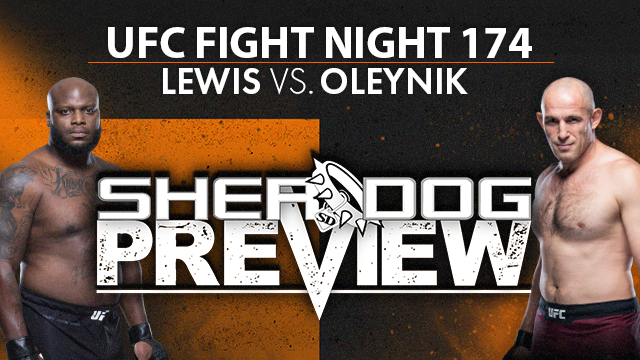 UFC Fight Night 174 on Saturday features a main card that looks to set up a surprisingly strong rest of August for the Ultimate Fighting Championship. The headliner has the requisite amount of heavyweight weirdness with Derrick Lewis and Alexey Oleynik involved, and stakes are surprisingly high in the co-feature, where Chris Weidman looks to hang on as any sort of going concern. Beneil Dariush-Scott Holtzman makes for a solid opener, and the other two bouts should also provide some welcomed entertainment.

Now to the preview for the UFC Fight Night “Lewis vs. Oleynik” main card:

This should be exactly the right type of weird heavyweight fight, as long as Lewis has not ruined it by going all normal on us. Lewis immediately gained notice upon his UFC debut with crushing knockouts over long-forgotten fighters like Jack May and Guto Inocente, but losses to Matt Mitrione and Shawn Jordan made it easy to write off “The Black Beast” as a glass cannon who had a limited ceiling. However, a 2015 victory over Viktor Pesta kicked off a six-fight winning streak that turned Lewis into a heavyweight contender and set the tone for his come-from-behind style. Pesta, like many men after him, would tire himself out trying to avoid danger by outwrestling Lewis, only to fall victim to a sudden comeback knockout in the last few minutes of a fight. A loss to Mark Hunt temporarily spoiled the fun, but Marcin Tybura and Alexander Volkov were eventually victims of Lewis’ third-round heroics, the latter leading to a memorable ending where Lewis scored a knockout, took off his pants and proclaimed that his “balls was hot.” That earned Lewis enough notoriety to get a quick turnaround for a title fight against Daniel Cormier, but after losses to “DC” and Junior dos Santos, Lewis took some time off and has looked like a new man since. The most obvious change is that Lewis looks to be in much better shape, but by his own standards, he has been much more measured in terms of his offense and approach. With wins over Blagoy Ivanov and Ilir Latifi, Lewis is already back in the heavyweight mix, though he will have to get by the strange challenge that is Oleynik to keep his title hopes alive.

Oleynik was picked up as part of the UFC’s wave of international signings in 2014, and “The Boa Constrictor” looked to be a fun curiosity and little else. Even then, Oleynik was nearly two decades deep into his career, and his success was reliant on a series of weird chokes that did not figure to work at the UFC level. Major knee surgery and a subsequent loss to Daniel Omielanczuk temporarily slowed down Oleynik, but the Russian otherwise rode his limited skills to a series of wins that have made him a going concern. A 2018 main event win over Hunt seemed to establish Oleynik as a contender, but a rough 2019 campaign raised some concern that his long career was finally coming to a close. He tired out quickly against Alistair Overeem and did not even get the chance to do so against Walt Harris, who sparked him with a 12-second knockout. However, once the year turned over to 2020, Oleynik was back to being the same old war horse as ever. Maurice Greene became the latest victim of his submission game, and Oleynik followed that with an ugly decision win over a returning Fabricio Werdum. Is Oleynik, at age 43, somehow ready for another run up the heavyweight ranks? Stranger things have happened.

At first, this seems like a pretty simple call. Lewis gets by on outlasting his opponents, and Oleynik has consistently shown that he only has about a round of gas left in the tank these days. However, this could prove to be a tricky fight for “The Black Beast.” Normally, he is content to let his opponents grapple with his massive frame and wear themselves out in the process, but Oleynik’s array of submission skills make him the rare opponent who may actually be able to finish the job on the mat. That is basically the fight. Oleynik will probably wrestle with Lewis for a round, at which point he will either get a finish or get overwhelmed in Round 2. Oleynik usually relies on some panic from his opponents, and if nothing else, Lewis has remained calm in most of his recent bouts, so on the scale of heavyweights, he is probably less likely to unknowingly dive into some sort of submission. Add in his physical strength, and the pick is Lewis via second-round stoppage.