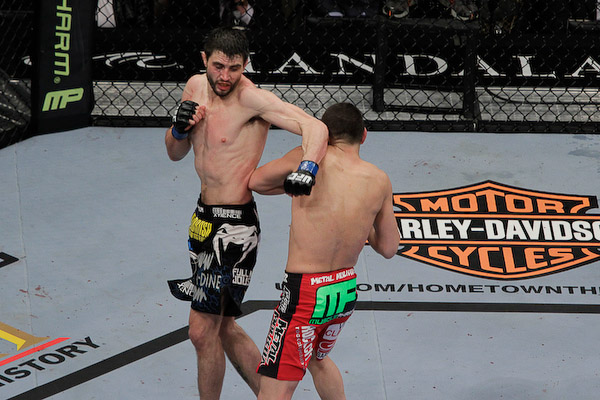 Sidelined by a knee injury, Carlos Condit has not fought in more than a year. | Photo: Sherdog.com


The Ultimate Fighting Championship returns to Fox Sports 1 and Brazil with a solid offering. In the main event, welterweight mainstays Carlos Condit and Thiago Alves meet in what promises to be an excellent, high-energy scrap, with the winner well-positioned for one last run at UFC gold.

The rest of the card is not exactly stacked, but it does feature several intriguing fights and a smattering of elite up-and-comers. In the co-headliner, Charles Oliveira takes on Nik Lentz in a rematch of their no-contest from four years ago. Elsewhere, the matchup between top flyweights Jussier da Silva and Wilson Reis has real potential, while the featherweight scrap featuring Mirsad Bektic and Lucas Martins promises outstanding violence. Two other top prospects, Denmark’s Nicolas Dalby and England’s Tom Breese, will make their organizational debuts.

While this is not the UFC’s best card, it should be fun. Let us take a look at each individual matchup for UFC Fight Night “Condit vs. Alves” on Saturday at Goiania Arena in Goiania, Brazil: 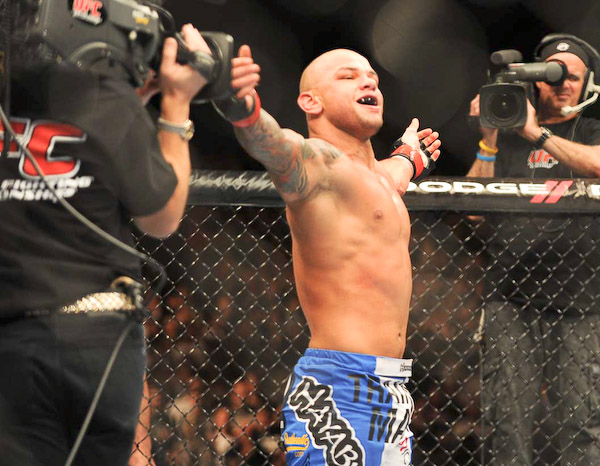 THE MATCHUP: While this is not the fight it would have been several years ago -- both Alves and Condit are showing signs of wear -- it should still be a fantastic scrap between violent, skilled competitors. Condit has been out for more than a year following a devastating knee injury suffered in his loss to Tyron Woodley; prior to that, he had rebounded from a pair of losses to Johny Hendricks and Georges St. Pierre with a knockout win over Martin Kampmann.

Alves has fought only five times in the last four years and is currently riding a two-fight winning streak, his latest victory a brutal finish of Jordan Mein. The winner should get one last shot at an elite opponent and a potential run at the top.

His against-type performance against Nick Diaz notwithstanding, Condit is a pressure fighter with the heart of a brawler. He does his best work moving forward and pushing his opponent toward the fence, where he can unload with punching combinations and flying knees or dive forward into the clinch. Sneaky back-stepping counterpunches make pressuring Condit more dangerous than many opponents expect. Head kicks, usually set up with sneaky level changes in the pocket, add another layer of danger to exchanging with him at close range. A constant barrage of snapping round kicks, hook kicks and side kicks to the thigh help to cut off his opponent’s angles at range and serve the purpose of wearing him down.

Attrition is the key to understanding Condit’s approach. He is hittable, especially early in the fight, but after the first few minutes, his extremely high level of offensive output and constant targeting of the body and legs starts to take its toll. Opponents who find success working on the counter get drawn into long exchanges in which Condit’s volume gives them too much information to process. He is vulnerable to the takedown, but his limitless reserves of energy allow him to focus on scrambling, with a preference for hitting the switch or a variety of sweeps from his back. His guard is active and dangerous, though skilled top players have been able to shut him down. Condit can be grinded down and tagged, but he remains exceptionally durable and dangerous deep into the fight.

Alves is one of the few strikers in MMA who is truly comfortable working in the pocket. He fights longer than one would expect given his lack of height, utilizing a steady jab, crushing low kicks and a long left hook to extend his effective range. That left hook -- usually followed or preceded by a straight right -- is Alves’ money punch, and he throws it both as a lead and on the counter. Although he is there to be hit, Alves is surprisingly difficult to catch cleanly, using a tight guard and efficient head movement to block or roll with shots and take away most of the sting. The Brazilian’s low kicks have received a great deal of attention over the years, and deservedly so. He throws them with brutal power and pulls his head offline as he does so, which makes him harder to catch with a counter. Almost nobody in MMA is as skilled at using them as both leads and counters at close range.

Striking is the meat of Alves’ game, but his years at American Top Team have made him a solid wrestler, as well. His takedown defense is outstanding, and when the mood strikes, he can hit a nice double-leg of his own. Grappling is not his biggest strength, but he can find his opponent’s back and scrambles back to his feet nicely when taken down. Alves has a tendency to get wild in transitions, however, and has been submitted that way before.

THE PICK: Unless the knee injury he suffered against Tyron Woodley has ruined him physically, this matchup favors Condit by a wide margin. He is durable enough to eat Alves’ counters in the pocket early, and of the two fighters, the Brazilian is more likely to wear down over the course of five rounds. Additionally, Condit holds a substantial advantage in offensive output, especially as the fight goes on. The clincher is the fact that Alves looked like he had lost a step in his last fight. That might also be true of Condit -- his knee injury was quite serious -- but it seems clear that Alves is no longer in his prime. I expect Alves to hit Condit quite a bit early and perhaps get him to the mat a few times, but as the fight progresses, the momentum will swing in the American’s favor. The pick is Condit by swarming knockout in the third round.