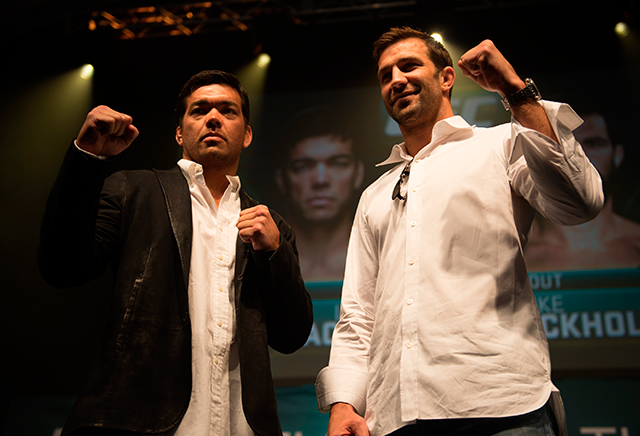 
The Ultimate Fighting Championship returns to Fox for its 15th show on the network, and it is one of the best lineups the promotion has placed on its flagship platform. In the main event, former light heavyweight champion and middleweight title contender Lyoto Machida takes on Luke Rockhold in a crackling matchup of elite fighters with real significance to the 185-pound division.

The roster is strong beneath the main event, as well, though its overall quality was impacted by the ill-timed withdrawal of Yoel Romero. In the co-headliner, Ronaldo Souza meets Chris Camozzi -- a short-notice replacement for the injured Romero -- in a rematch of their May 2013 encounter; Cub Swanson draws young Max Holloway in an outstanding scrap; and Paige VanZant gets a tremendous opportunity to vault herself into stardom on the main card against Felice Herrig. Even the undercard includes a variety of compelling bouts: Beneil Dariush, Aljamain Sterling, Corey Anderson and Patrick Cummins all have the chance to announce their arrival as present and future contenders with victories.

This is a fantastic card. Let us take a look at each UFC on Fox 15 matchup, scheduled for Saturday at the Prudential Center in New Jersey: 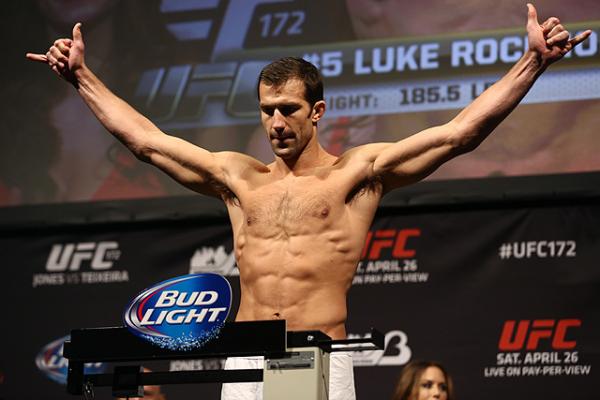 Photo: Dave Mandel/Sherdog.com
Rockhold is a threat in all areas.
THE MATCHUP: Two of the UFC’s top middleweights meet in a fantastic pairing. Machida won the light heavyweight title from Rashad Evans back in 2009 but alternated wins and losses against the top of the division afterward. A drop to middleweight has proven productive, as he has lost only to kingpin Chris Weidman. Rockhold, the former Strikeforce middleweight champion, has looked outstanding in the UFC, aside from a loss to the resurgent Vitor Belfort almost two years ago. The winner of this fight will have an excellent claim on a title shot.

Rockhold is athletic, diverse and lethal in every phase. His southpaw striking repertoire is outstanding, but it may actually be the least dangerous part of his game, which says a great deal about how good he really is at this point. At range, Rockhold takes a patient approach, cracking away with powerful round and front kicks with both legs until his opponents try to get inside his reach. When they inevitably do, he cracks them with a gorgeous counter right hook as he retreats or lets them run into a straight left. He is less comfortable throwing combinations as he moves forward, but his pressuring footwork is very good and he has a knack for drawing out a shot that he can counter. He has two worrisome tendencies, though. First, his patience often translates into a lack of offensive output, and second, his desire to counter often leads to him retreating in straight lines.

As good as he is working at range, Rockhold is even better in the clinch, where his length and size give him great leverage and control, especially against the fence. He excels at blasting hard knees to the head and body, and he can hit the occasional trip. He is not an outstanding offensive wrestler, but he is rock-solid defensively and is at his best when his opponents shoot in on him. Scrambling is Rockhold’s wheelhouse, and he can hit a bewildering variety of slick submissions and positional advances in transition.

Machida’s karate-based game remains a joy to watch, even as its strengths and weaknesses have become clear in recent years. The focal point of his game remains circling at range, leaping in and out with single shots and flurrying on the counter when his opponent commits to an attack and falls short. Hand fighting with opposite-stance opponents is likewise fundamental, as he uses his right to bat down their left and then throws over the top. Machida has added to that repertoire with an increased ability to move forward and throw volume, and he is even willing to exchange in the pocket from time to time. The straight left, left kick to all levels and stepping left knee to the body are his bread-and-butter strikes, and each one is capable of ending the fight at any time.

The clinch is also a strong point for Machida. He is nearly impossible to hold on the inside if he does not want to be there, but when he initiates tie-ups, he owns a beautiful arsenal of trips and foot sweeps. Shot takedowns are not his forte, but he defends takedowns nicely, especially when he has space to sprawl or limp-leg. On the mat, Machida passes nicely and controls well but offers little from his back. He has struggled from wrestling control positions such as the top-ride, though that does not project to be an issue in this fight.

THE PICK: This is a brutal fight to pick. Neither Machida nor Rockhold has faced many southpaws -- Rockhold fought Vitor Belfort in 2013 and Machida met Rich Franklin all the way back in 2003 -- so it is difficult to project what this matchup will look like on the feet, where most of the fight will probably take place. I think this will hurt Machida more than Rockhold, however, because the Brazilian relies more on the additional distance an open-guard, or orthodox-southpaw, matchup provides, and hand fighting is central to his striking setups. The keys to beating Machida at range are pressure footwork, patience and the willingness to take what he gives you, even if that is only pot-shotting low kicks and the occasional power shot, all of which Rockhold has shown in the past. On the inside, Rockhold should have a substantial advantage, and if he can get the fight to the ground, a difficult proposition, he should have a substantial edge there. In a fight that consists mostly of striking at range, some control in the clinch and a few brief exchanges on the mat, the pick is Rockhold by close decision.