The first time Greg Jackson held pads for Rashad Evans at his Albuquerque, N.M., mixed martial arts mecca, he knew he was dealing with a special athlete. He saw speed, power and, most importantly, a desire to learn and a willingness to be shaped and molded. The cerebral superstar trainer was a potter with prime clay in his hands.

So it came as little surprise to Jackson when Evans -- Sherdog’s Fighter of the Year for 2008 -- smote Chuck Liddell with one punch and then captured the light heavyweight championship three months later when he stopped Forrest Griffin on a third-round technical knockout at UFC 92.

“We knew what he was capable of,” Jackson said. “He’s actually capable of more than what he’s shown. People have to remember he’s had only 14 fights. He’s still really young in this sport, and he’s only going to get better. The Rashad Evans you see a year from now is going to be a lot better than the one you see now.”

Considering the manner in which 2007 ended for Evans, it was hard to imagine such a rapid ascent for the former Michigan State University wrestler. He needed a point deduction against Tito Ortiz to earn a draw with the former light heavyweight titleholder at UFC 73 and then battled British standout Michael Bisping to a split decision in a lethargic effort at UFC 78. Still, opportunity abounded.

A fight with future hall of famer Chuck Liddell was announced for June, but “The Iceman” was forced to withdraw from the match with a torn hamstring, leaving Evans without a dance partner for the first nine months of 2008.

“The first half [of the year] was [as] frustrating as I don’t know what,” Evans said. “Coming off the Bisping fight … it wasn’t a fight I looked great in. I just wanted to get that monkey off my back, because you’re only as good as your last fight.”

Once Liddell withdrew, Evans was left to sit back and wait.

“I kind of got depressed,” he said. “I felt like I was in the best shape of my life at that point. Every time you’re out of the ring for so long, you feel like a rookie when you first step back in there. You’re getting the same nerves.” 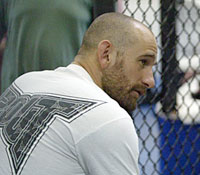 Jeff Sherwood/Sherdog.com
"If you just sit back, the
game's going to pass you by,"
said trainer Greg Jackson.
Patience paid, however, and Evans was awarded a bout with Liddell at UFC 88 on Sept. 6 in Atlanta. Questions about his legitimacy were framed by the infamous heat and humidity of the Deep South, and Evans entered the match as a heavy underdog against the man who had ruled the 205-pound division with his iron fists. Nineteen days before his 29th birthday, Evans climbed into the cage against Liddell and spent the first round knocking off the rust from a 10-month layoff.

“Once you get in there and you get your rhythm down,” he said, “it’s really nothing.”

A scant 1:51 into round two, Evans made Liddell pay for a lazy uppercut and knocked him unconscious with a blistering right hand that left thousands of drunken mouths ajar at Philips Arena. The sudden victory -- and the image of a fallen Liddell struggling to regain his senses -- sent ripples through the MMA community. Suddenly, Evans’ name was on every reputable top 10 list. What’s more, it earned him a title shot against Forrest Griffin at the UFC’s year-end show in Las Vegas.

“He’s a really hard worker who’s super intelligent and has extreme talent,” Jackson said. “He’s smart about the way he lives his life and how he approaches it. When you have someone with those traits, it’s only a matter of time before you start having this kind of success.”

For two rounds, Griffin took small bites out of Evans in the UFC 92 main event, as he kept him at bay with his long reach and off balance with a variety of strikes. Even so, Evans never lost hope, and when the fight hit the ground in round three, he waited for an opportune time to uncork his fists. He struck Griffin with a vicious right hand from inside the champion’s guard and followed up with seismic blows that left him defenseless. UFC President Dana White wrapped the belt around Evans’ waist soon after, and his climb to the mountaintop was complete.

“Not that it was easy, but it was surprising how it just ended and how frustrated I was feeling the round before,” Evans said. “What I wanted to do when I came into the UFC was just go out there and be the fighter I thought I could be. I didn’t know if that was going to make me a champion, but I wanted to go out there and fight to my fullest. I didn’t know if I could be a champion or not.”

Now he knows, along with the rest of the MMA world. Still, it took some time for his latest conquest to sink in.

“I had a migraine [after the fight],” Evans said. “I was quite overwhelmed because of all the attention. I didn’t drink any alcohol. I just kind of sat back, like, wow, this really happened? [I was] kind of in disbelief.”

“He’s got to get back in the gym and push forward,” Greg Jackson said. “He has to find better and smarter ways to do things. If you just sit back, the game’s going to pass you by.”

Evans (13-0-1) expects to fight again sometime in the late spring or early summer. “Rampage,” though he has indicated he prefers a rematch with Griffin before challenging for the title, seems like the most logical choice. One of the UFC’s most charismatic competitors, the 30-year-old knocked out longtime nemesis Wanderlei Silva at UFC 92 and has posted seven wins in eight fights.

“I really don’t have any preference on who I fight,” Evans said. “At this point, being the champion, you have to be willing to fight all comers now. I’m ready to go whenever, because now the game has to change. Now I’m the one that’s going to be hunted, and everybody’s going to be after me and everybody will be making gameplans and checking out my weaknesses.”

“He’s living up to his potential,” he said. “That’s all anybody can do.”