With a healthy dose of two-way fury and thrilling swings of momentum to boot, Eddie Alvarez’s TKO over Tatsuya Kawajiri has nabbed Sherdog.com’s 2008 “Fight of the Year” award.

The competition was tough, but the July 21 semifinal bout in the Dream lightweight grand prix compressed virtually everything you’d want from a fight into seven and a half minutes of all-out action.

Alvarez’s game plan coming into the match was to use the threat of his takedowns to set up striking, and vice-versa, but that nearly backfired as Kawajiri started dropping bombs on him.

“I thought I’d be able to get in and out more on him when we were fighting, rather than taking as many hits as I did. Every time that guy hit me I felt rocked,” Alvarez said. “It felt like I was getting hit with something. He hits very hard. I got to give it to him. I’ve been hit by a lot of pro boxers, and I’ve never been rocked more times, in seven minutes, in my life.”

Despite the rousing win, Alvarez’s banged-up right eye and general condition drew notice from ringside physicians and officials. After the bout he was informed he would not be allowed to continue into the final fight later that night.

“It was the judges and the doctors. I pleaded with them to let me fight and go on. They just simply wouldn’t let me do it,” said Alvarez, who was replaced by an opponent he had beaten earlier in the tournament, eventual grand prix winner Joachim Hansen. “I begged and cried and did what I could, but they just wouldn’t let me go on.”

It would be almost criminal to make Alvarez fight again that night, however, as he and Kawajiri had waged a battle that resembled MMA’s version of Marvelous Marvin Hagler-Tommy Hearns (right down to the fact that Alvarez, like Hagler, won after being examined by the ringside doc to check a cut). High drama, indeed. 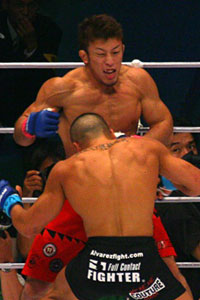 Stephen Martinez/Sherdog.com
Alvarez vs. Kawajiri was
a slugfest for the ages.
At the opening bell, both men sprang from their corners, ready to initiate the action and force a pace that would break the opponent. The ensuing war saw both in trouble, as Alvarez mixed in clever body and head punches, along with a consistent right low kick that thumped home. Kawajiri, however, countered with big punches and dropped Alvarez with a bodacious left hook 4:30 in before riding effectively from top position for a full two minutes.

Alvarez seemed spent, but the Philly-born battler hung tough and executed a nice reversal from mount to regain his feet, only to be floored again seconds after taking three bombs flush on the jaw. But Alvarez sprung up later and delivered the coup de grace with a big flurry of punches, dropping Kawajiri en route to a ground-and-pound stoppage.

In a bruiser waged on the WEC undercard of Urijah Faber-Jens Pulver, Torres showed his big-time skills against a game challenger for critical exposure in a televised event. Maeda resembled a man running into a brick wall as he kept trying to break Torres’ will, but the WEC bantamweight champion proved too accurate on the feet and too clever on the ground. Finally, after three rounds of increasingly one-sided action, the ringside physician stopped the fight. An excellent match -- especially considering that Torres’ other three WEC matches have totaled just more than nine and a half minutes -- and proof that the champ can dig deep when he needs to.

The much-hyped Bay Area showdown at Strikeforce proved a resounding coming-out party for Cung Le, whose previous two bouts had raised eyebrows among fans as well as critics who were still skeptical about the san shou ace’s transition into MMA. Le proved masterful in dictating range, and the timing on his standup was truly baffling. Whether it’s a snapping front kick, spinning backfist or a simple one-two followed by a leg strike, Le constantly kept Shamrock guessing and got the stoppage after breaking a bone in the ex-UFC champ’s arm when Shamrock blocked a kick. Nobody’s put Le on the ground -- yet -- but with his grappling pedigree and vexing standup style, it’s going to be a tall order for anyone to get and keep him there.

Everybody knew Griffin was game coming into his challenge for the UFC light heavyweight title, but the real question was whether he was in over his head. The season one winner of the UFC reality show showed a good head for tactics, though. Despite a few scares -- whenever Jackson missed punches, you could almost see smoke trails whizzing by Griffin’s chin -- Griffin used sharp standup to gut out a five-round decision. While neither fighter was in the kind of dire trouble that made Alvarez-Kawajiri such a thrilling bout, the fight was exciting on its own merits, particularly in seeing a contender like Griffin show he can hang with the big boys.