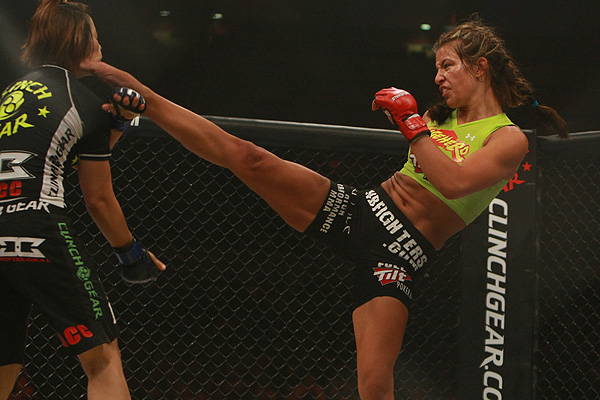 As if a depleted roster was not bad enough, injuries have robbed Strikeforce “Tate vs. Rousey” of a few marquee matchups, most notably the postponed heavyweight grand prix final between Josh Barnett and Daniel Cormier. All is not lost, however, as the 135-pound title tilt between Miesha Tate and Ronda Rousey is still on.

The women’s division needed a shot in the arm on the heels of Cristiane “Cyborg” Santos’ recent suspension, and these two have provided it. Rousey has dominated her competition thus far, but she will face a stern test in Tate, who has not taken kindly to the steady stream of sound bites that always seem to emanate from the former Olympian.

An exciting bout will go a long way toward solidifying the future of female MMA at the highest levels, and Tate and Rousey seem ready to deliver. Going down from the Nationwide Arena in Columbus, Ohio, Strikeforce “Tate vs. Rousey” also features a lightweight bout between Josh Thomson and K.J. Noons and a welterweight clash between Paul Daley and Kazuo Misaki. Here is a further look at the card, with analysis and picks. Ronda Rousey File Photo
Rousey won bronze as an Olympian.
The Matchup: Gina Carano’s 2007 EliteXC bout against Julie Kedzie was regarded as a landmark event in women’s mixed martial arts because it was the first female bout to be televised on Showtime. Since then, no woman has generated as much attention for the sport, even though Carano’s career has been dormant since 2009.

Enter Rousey, a bronze medalist in judo at the 2008 Summer Olympics whose interview time has far exceeded the length of her fights to date. Though she has ruffled more than a few feathers with her outspoken style, the Californian has undoubtedly been good for the women’s product, as her showdown with Tate appears to be the most anticipated bout since Carano last stepped in the cage.

There is plenty of substance behind this matchup, however. Rousey’s cage time has been limited because she is a spectacular finisher. In seven fights, four professional and three amateur, nobody has lasted more than 57 seconds with “Rowdy.”

What UFC middleweight Rousimar Palhares is to the heel hook, Rousey is to the armbar, as all seven of her victims have succumbed to some variation of the hold. Despite clearly favoring one move, Rousey is improvisational in her approach: she claimed she had never practiced the armbar she utilized to submit Sarah D’Alelio at Strikeforce Challengers 18. With her judo expertise, Rousey is adept at exploiting even subtle positioning advantages to get the fight where she wants it. Right now, the biggest knock on Rousey is that she has yet to be significantly tested. In her last outing, she dislocated the elbow of muay Thai expert Julia Budd so quickly that fans were unable to see how she would respond to being hit by a world-class striker.

Tate would appear to have the type of skill set that can finally take Rousey into the deep waters of a fight. In capturing the 135-pound title from Marloes Coenen last summer, Tate displayed uncanny composure, as the Dutch fighter threatened with submissions early in the fight. Eventually, Tate found an opening of her own and elicited a tapout via arm-triangle choke; it remains the only time Coenen has been submitted in 24 professional fights.

A representative of Team Alpha Male, Tate employs a strategy not unlike that of some of her male counterparts at the well-respected California gym. Her standup is not overwhelming, but it is effective enough to allow her to land combinations and close the distance for takedowns. Once on the ground, she can work ground-and-pound aggressively thanks to her solid submission defense. The 25-year-old transitions well from one position to another and has a good sense of how to control her opponent on the mat.

The Pick: Tate will be able to extend the fight past the 30- to 45-second range to which Rousey is accustomed. How much longer depends on if “Takedown” can keep her upper appendages protected. While Rousey has undoubtedly trained to go five rounds, it will be a whole different ballgame to have her stamina tested in the heat of a live fight. Still, Rousey has a good base and will be difficult to take down, and Tate’s standup cannot win the fight by itself. Fans always want high-level fighters to pass significant tests, and they will get to see more of Rousey here. Tate puts up a valiant effort as Rousey attacks from all angles, but, eventually, the Olympian submits her in round three.