In what turned out to be one of the wackier nights you’ll see in mixed martial arts, the latest offering from World Extreme Cagefighting on Nov. 5 saw the group’s top star and one of the best pound-for-pound fighters in the world, Urijah Faber, dethroned soundly by a featherweight competing in his first live televised fight; the world's No. 2 middleweight become the first champion in Zuffa history not to make weight and show a disturbing lack of focus in losing a plodding three-round fight; and a seemingly-invigorated Jens Pulver fall to strikes in the first round after going five ultra-tough rounds in June.

WEC 36 from Hollywood, Fla., concluded with American Top Team's Mike Thomas Brown having the featherweight title strapped around his waist after a frenetic 2:23 clash with Faber. After a series of scrambles, Faber lunged off the fence with an unorthodox back elbow strike, but accelerated directly into a right hand by Brown that put the WEC poster boy down for the TKO. With the win, a choked-up Thomas brought home the first UFC/WEC belt to the elite ATT camp and a $7,500 bonus for the night's best knockout, perhaps the most shocking in WEC history. Brown tore rib cartilage in the final onslaught on Faber and will be out four to six weeks, but was up and about just a day after the stunning victory.

In an interview before the fight on Sherdog.com's "Beatdown" radio show, Faber noted that he was taken aback at Brown's size, but did not feel additional pressure with WEC's first pay-per-view effort on the drawing board for 2009. Despite the loss, Faber, whose fight with Pulver in June drew by far the highest rating and biggest live crowd in WEC history, would still likely headline a pay-per-view, with a rematch against Brown suddenly seeming like a viable main event.

Faber wasn't the only top-10 fighter to falter at WEC 36, a Versus broadcast that took place before 5,227 fans at the Seminole Hard Rock Hotel & Casino, which translated into a $563,578 gate. Heralded middleweight Paulo Filho, who entered a drug rehab program for addiction and depression after his last fight against Chael Sonnen in December, showed no signs of being an elite fighter in the rematch.

Filho laid mostly on his back, while Sonnen, who was caught in a sudden armbar last time, was befuddled and mostly picked away at the distracted Filho for a three-round decision win. The bout drew vociferous boos and even obscene chants. There were no post-fight interviews.

The WEC middleweight title was not on the line because Filho failed to make the 185-pound limit, first by seven pounds and then by four pounds. Sonnen was disappointed with losing the title shot, saying he promised his father on his deathbed that he would win it. 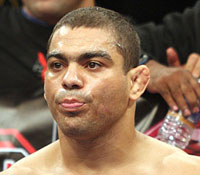 Photo by Sherdog.com
Filho showed no signs of
being an elite fighter at
WEC 36 against Chael Sonnen.
Even with a 25% cut into his wages for failing to make weight, Filho still banked $30,750 for his non-efforts. Sonnen made $48,250, which included a $19,000 win bonus.

The middleweight belt is now defunct, as the WEC is dropping the division and folding those fighters into the UFC in 2009. To put it mildly, this was not the Paulo Filho, now 16-1, that the fight world has come to know. In addition to the weight issues, Filho appeared to be speaking in Portuguese to no one in particular throughout the third round. Filho's troubles were not touched on during the broadcast until the third, when the Brazilian's vacant expression compelled commentator Frank Mir to cite Filho’s "personal problems." Filho told Fighters Only magazine after the fight that he is planning to move up to light heavyweight competition and relocate his training from Brazil to Los Angeles. He said the Sonnen loss will give him "a new spirit."

Elsewhere, Jens Pulver, 33, who showed eye-opening versatility and durability against Faber in June, proved no match for the exceptionally heavy hands of Leonard Garcia. Garcia nailed Pulver early in the first round with a straight right and finished the kneeling lightweight legend with wild swinging for the TKO. Garcia called for a featherweight title shot.

Jake Rosholt, a three-time NCAA wrestling champion whom Zuffa signed this year along with fellow collegiate grappling stalwarts Johnny Hendricks and Shane Roller, absorbed big shots from Nissen Osterneck but was able to score takedowns at will. A battered Rosholt eventually landed in full mount and ended the fight with ground-and-pound. Arizona Combat Sports’ Aaron Simpson got his middleweight fight onto television by landing a crushing knockout punch on David Avellan only 14 seconds into the first round.

Notable undercard action saw Rani Yahya get back on the winning track at bantamweight via a guillotine choke win over Yoshiro Maeda, and "Razor" Rob McCullough dropped a wild fight to undefeated Donald "Cowboy" Cerrone via decision. The bout, which regrettably never made it on air, earned Cerrone and McCullough $7,500 "Fight of the Night" bonuses, while Yahya banked the night's submission bonus.

Because WEC 36 was postponed in September due to the threat of Hurricane Ike, WEC is doing a quick turnaround for its next event on Dec. 3. That will be headlined by bantamweight champion Miguel Torres' first main event fight in a title defense against Manny Tapia. WEC 38 is tentatively set for the last week in January, when lightweight champion Jamie Varner told Sherdog he expected to face the winner of the McCullough-Cerrone fight.