Fans at the Seminole Hard Rock Hotel & Casino in Hollywood, Fla., saw a memorable WEC 36 event Wednesday, capped off by one and a half championship titles changing hands.

Chael Sonnen didn’t actually take middleweight champion Paulo Filho’s belt despite beating him, but the 12th WEC under Zuffa was still arguably one of their best events yet, with a strong undercard and an even better televised portion.

Defending featherweight champion Urijah Faber was the heavy favorite going into his bout with challenger Mike Thomas Brown. While many experts acknowledged the 33-year-old American Top Team representative as a durable, experienced fighter, few expected the one-time UFC veteran to deliver a match as exciting and competitive as Jens Pulver had in Faber’s previous title defense.

Brown not only eclipsed the performance of Pulver but also stunned fans and critics alike by stopping the California Kid’s 13-fight, 36-month win streak at 2:23 of the opening round.

As expected, Brown was the bigger fighter Wednesday night, probably adding somewhere between 10 to 12 pounds to his 5-foot-6 frame after the weigh-in. It was not necessarily the additional weight that allowed him to control the champion in the clinch and even take him down at one point, though. Those successes were due to Brown’s excellent game plan and strong boxing training courtesy of Olympic gold medalist Howard Davis Jr.

When a seemingly frustrated Faber went wild and threw a high-risk, no-look elbow strike, Brown caught him with a perfectly timed short right hook straight to the jaw. A barrage of punches on the ground finished a nightmare of a fight for the always-cheerful California native.

Faber’s unexpected loss has likely thrown a monkey wrench into his options for the time being. Not only have the chances of fighting Japanese superstar Norifumi “Kid” Yamamoto on New Year’s Eve -- which were slim to begin with due to a partially torn ACL on Yamamoto’s part and cross-promotional limitations -- evaporated with the crushing defeat, the loss also puts a question mark behind Faber’s possible move up in weight to fight in the UFC and behind a showdown with WEC bantamweight champion Miguel Torres.

It is unlikely that WEC matchmaker Scott Adams will put the 29-year-old Faber right back in there with Brown given the decisive nature of their bout. It is more likely that the new champion will make his first title defense against the hard-hitting Leonard Garcia, who scored another impressive knockout over former UFC lightweight champion Jens Pulver on Wednesday. Meanwhile, a high-octane scrap for Faber would be against versatile Brazilian slugger Jose Aldo, who stopped Jonathan Brookins on Wednesday and tore through Shooto great Alexandre Franca Nogueira in June. 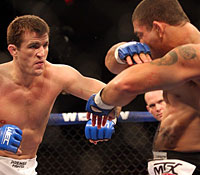 Photo by Sherdog.com
Paulo Filho didn't look like the
fighter who had racked up a
16-0 record at WEC 36.
Filho needs help, time

The previously unbeaten Paulo Filho had already made plenty of bad headlines leading up to his bout with Chael Sonnen after missing the weight limit by a whopping four pounds -- which turned the match into a non-title affair.

It is highly unprofessional and unfair to an opponent to come in that much over weight, though it should be noted that the former Pride standout has a history of struggling to make weight. Ahead of his fight against Ryuta Sakurai in September 2005, he arrived in Japan 13 pounds over and reportedly did some internal damage trying to shed the superfluous weight within 48 hours.

With that experience behind him and some public disapproval of having to fight Chael Sonnen again -- an opponent he had already, albeit barely, beaten -- he might not have wanted to risk his health again, especially after recently going through withdrawal treatment and rehab for depression and painkiller addiction.

His performance in the ring turned out accordingly, with Filho looking disinterested, slow and sluggish. He was a worn-out version of the man who had beaten down very solid opposition in Japan, and now it’s hard to say what the future has in store for the 30-year-old Brazilian jiu-jitsu black belt.

With the WEC middleweight division defunct as of Dec. 4, it is highly unlikely that Filho will be drafted straight into the UFC after a performance that was the lone low of an otherwise excellent WEC show.

Instead of descending into self-pity, Filho desperately needs to get his life outside of the cage back on track. A change of location and a new training regimen could do the trick here. The best choice for him might be to reunite with his good friends and former training partners Anderson Silva, Ricardo Arona and the Nogueira brothers. More than ever, he needs the help of his friends.

Chael Sonnen, on the other hand, did everything the same as he had in his first fight with Filho, except that he avoided the armbar this time. With an opponent so badly out of shape, Sonnen has to take the blame for not finishing the fight within the distance, though, especially since he had been livid that the title was not on the line. Regardless, he should be headed to the UFC.

Despite the lackluster Sonnen-Filho bout and the WEC’s marquee fighter, Urijah Faber, losing for the first time in seven fights for the promotion, the future looks very promising for the WEC. With the 185- and 205-pound divisions soon coming to an end, the lighter weight classes will receive the attention they really deserve. And with the upcoming arrival of more top talent like IFL featherweight champion Wagnney Fabiano and former Shooto 143-pound titleholder Akitoshi Tamura, the WEC continues to position itself as the western counterpart to Shooto.