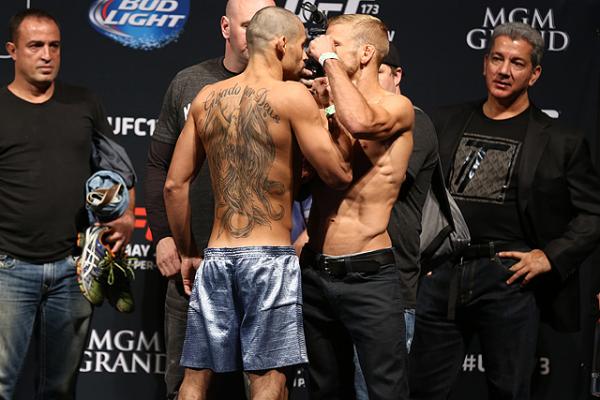 
Let us get this out of the way immediately. No, this is not the kind of offering we have come to expect -- or, alternatively, should expect as consumers -- from the Ultimate Fighting Championship for the low, low price of $54.99. It was a weak card even before it lost the Demetrious Johnson-Chris Cariaso flyweight title co-headliner to UFC 178, and the event now includes only four ranked fighters. For comparison, that is only one more than the notoriously weak UFC Fight Night “Bisping vs. Le” event and fewer than the UFC Fight Night “Henderson vs. dos Anjos” show on Aug. 23.

With that said, UFC 177 still includes a few intriguing matchups. The rematch between champion T.J. Dillashaw and challenger Renan Barao might not have much promotional heat behind it, but with Dominick Cruz an unknown quantity after nearly three years out action, the fight gives us an opportunity to see the world’s two best bantamweights go toe to toe again. Tony Ferguson is a talented dark horse in the lightweight division, and Bethe Correia will attempt to stake a claim to one of the top spots at women’s bantamweight. On the undercard, Lorenz Larkin and Derek Brunson offer a fantastic matchup of talented middleweights, and Olympic freestyle gold medalist Henry Cejudo debuts against down-on-his-luck veteran Scott Jorgensen. 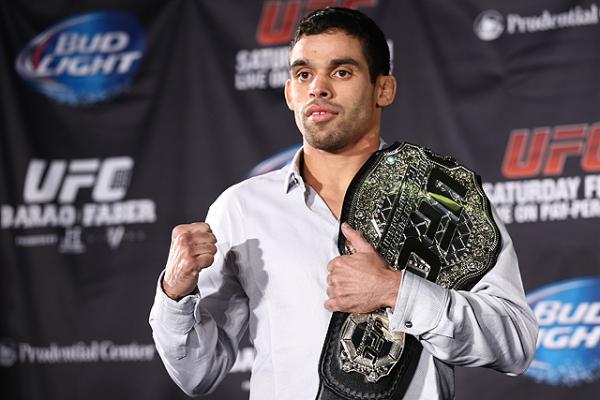 The Matchup: The first four minutes of the title bout between overlooked challenger Dillashaw and reigning champion Barao went largely as expected at UFC 173. Quite suddenly, however, Dillashaw landed an overhand right that nearly separated Barao from consciousness, and the rest of the fight was more or less the Californian’s to lose up until a flurry of brutal shots put the champion down for good in the final frame.

While few thought Barao was deserving of the immediate rematch, this is the fight at hand, and if anything, the outcome of the first fight makes the second all the more intriguing.

The problem with Barao’s strategy in their first meeting was essentially that the version of Dillashaw he and his coaches saw on tape and thought he would encounter simply no longer existed. Very few fighters in the recent past, save Jon Jones and Chris Weidman, have improved at the rate Dillashaw has achieved under the watchful eye of Duane Ludwig. The mystifying angles the Team Alpha Male product occasionally flashed against Mike Easton became the centerpiece of his process as he hit Barao with shot after shot the champ never saw coming. There were even times when he ended up behind Barao mid-combination.

Lest we understate the sheer scale of his accomplishment, Dillashaw utterly dismantled the most skilled striker in the bantamweight division with relative ease. His constant stance switches, unusual footwork and command of angles and his ability to feint level changes and throw punishing strikes -- uppercuts and sneaky high kicks -- that take advantage of his opponent’s reactions to the threat of his wrestling is exceptional. The fact that clean technique and excellent fundamentals gives his punches real power is likewise notable. If that is not enough to impress the discerning viewer, he remains a capable wrestler with perfect takedown defense and slick positional grappling that features lightning-quick back-takes.

With all of the praise rightfully heaped on Dillashaw in the aftermath of the fight, it is easy to overlook the fact that Barao survived the initial knockdown and got in his own licks despite clearly lacking his usual reactions. Dillashaw exploited the flaws in Barao’s striking game -- his reliance on planting his feet and throwing wicked counters in the pocket, the lack of consistent setups for his dynamic kicks and his average head movement -- to an extent that nobody thought possible, and we should not let that blind us to the overall effectiveness of the former champion’s game. He leads with a sharp jab, throws a beautiful counter right and supplements his crisp hands with a diverse array of round and spinning kicks. His step-in and flying knees serve as an effective deterrent to opponents trying to drop levels to shoot, and his takedown defense is some of the best in UFC history. His trips and throws from the clinch are top-notch, and on the ground, he employs a suffocating top game with opportunistic passes and submissions.

The Pick: The question here is not whether Barao has the skills to beat Dillashaw -- he does -- but whether he has the skills and the game plan to beat an undoubtedly improved version of the champion that will show up, rather than the guy he fought back in May. Setting up his kicks with punches and throwing low kicks to chop down Dillashaw as he attempts to circle out would be a good start, and a combination of grinding in the clinch and attempting the occasional takedown might open up his striking game. More than anything, Barao needs to fight Dillashaw near the fence, not in the middle of the cage, to minimize the effectiveness of the champion’s footwork and angles. Can he do that? I believe so, and I would not be surprised if he did. However, the safer pick is an improved Dillashaw by decision.