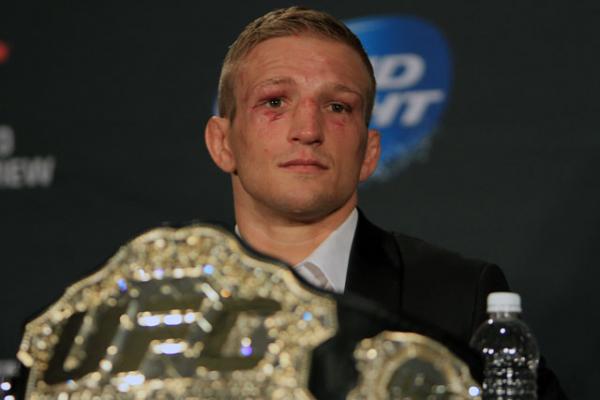 T.J. Dillashaw is making a habit of late, violent finishes.

First, the Team Alpha Male product notched a fifth-round stoppage of Renan Barao in May to take the Brazilian’s bantamweight crown. On Aug. 30, in the makeshift main event of UFC 177, Dillashaw used fancy footwork and lightning-fast punching combinations to outclass last-second challenger Joe Soto. The champion appeared to be cruising his way to a unanimous decision when, 2:20 into the final round, a vicious head kick and follow-up left hook put Soto down for the count.

The knockout victory keeps Dillashaw firmly in place as the MMA world’s top 135-pounder. His previously scheduled rematch with Barao now nixed, Dillashaw could be looking at a second fight with Raphael Assuncao, who represents one of only two losses on the champion’s 13-bout ledger.

Meanwhile, the best welterweight operating outside of the Octagon scored another impressive win, as Ben Askren captured the 170-pound crown in One Fighting Championship on Aug. 29. The former University of Missouri wrestler put an 84-second beatdown on Japanese slugger Nobutatsu Suzuki, then hit Twitter to call for a shot in the Octagon -- an idea to which UFC President Dana White seems to be warming.

Brazilian Bethe Correia spoiled the promotional debut of Shayna Baszler at UFC 177, demolishing the submission-savvy veteran with a barrage of punches and elbows in the second round. The win moves Correia into the women’s bantamweight top 10, where she takes the place of countrywoman Jessica Andrade.