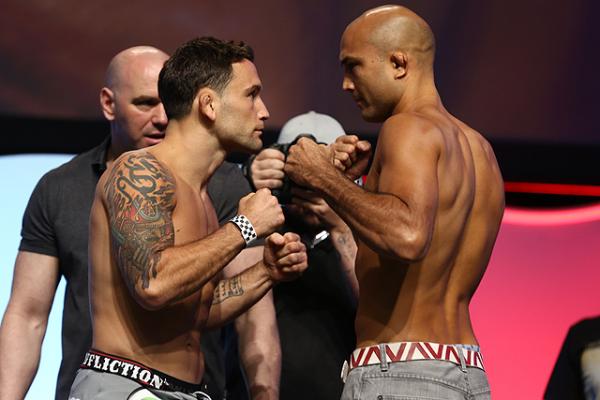 Two of the best to ever lace up mixed martial arts gloves. | Photo: Dave Mandel/Sherdog.com


Editor’s note: This is the first installment in a five-part series examining the best of the best in each of the five major MMA weight classes.

Comparisons drive sports culture. Whether fans are arguing about the 1996 Chicago Bulls vs. the 2001 Los Angeles Lakers or the 1985 Chicago Bears vs. the 2007 New England Patriots, we love to find ways to match up the best players and teams across generations, claiming our opinions as definitive conclusions to untestable hypotheses. Combat sports are no different, perhaps feeding off this frenzy more than other athletic pursuits, with such discussions centering on the identity of the best fighter of all-time at any weight class, despite their being no possibility to directly compare a bantamweight with a heavyweight.

Though MMA has a relatively short history, there is no shortage of debate about who is the greatest of all-time for any given division. Though these discussions are what make it fun to be a fan, they also become mired in a swamp of hyperbole; one good fight and you are the greatest, one off night and you are washed up. However, numbers do not lie, so we took the liberty to run a statistical analysis on fighters who can legitimately make a claim as the lightweight division’s G.O.A.T.

Using only fights from major organizations (or against major opponents, in the case of the Rumble on the Rock-promoted B.J. Penn-Takanori Gomi match), we take a look at each fighter’s record at the weight class, as well as the strength of his opposition, winning streaks and for-and-against finishing rates. Presented is a case for and against each pugilist, leaving the conclusions and debates for the fans to decide: