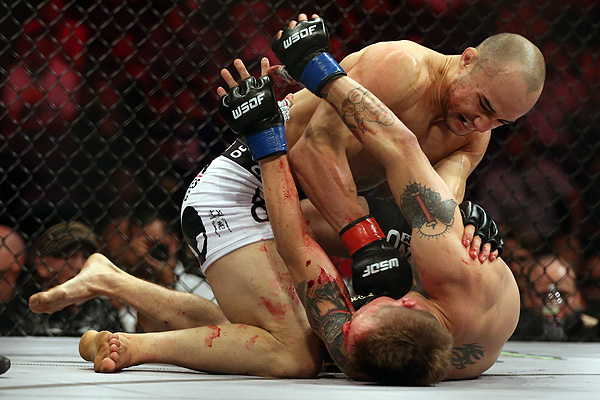 Marlon Moraes has developed into a marquee talent for the World Series of Fighting. | Photo: Dave Mandel/Sherdog.com


Marlon Moraes does not waste time. In less than a year, he has become a centerpiece for the fledgling World Series of Fighting promotion.

The world-ranked Brazilian will put his five-fight winning streak on the line when he confronts Carson Beebe in a featured World Series of Fighting 6 matchup on Saturday at the Bank United Center in Coral Gables, Fla. Moraes has compiled a perfect 3-0 mark within the promotion, having rattled off consecutive victories against former World Extreme Cagefighting champion Miguel Torres, Sports Lab representative Tyson Nam and Cage Warriors Fighting Championship alum Brandon Hempleman.

In this exclusive interview with Sherdog.com, the 25-year-old discusses his evolution from unknown prospect to title contender, his forthcoming showdown with Beebe and the humble beginnings in Brazil that helped spur his rise as a world-class mixed martial artist:

Sherdog.com: What is it like to have the bull’s eye on your back every fight now that you are considered a cornerstone for the World Series of Fighting?
Moraes: I feel so happy. I’ve been working so many years for this. Fighting is my life. Every time I step in their cage, I’m doing what I love to do. That’s it. I’m always hungry and motivated to do it.

Sherdog.com: Have you learned more from your wins or your losses?
Moraes: All fighters learn more from losses because your mistakes are so evident, but everybody prefers to learn from a victory. It’s always good to go back and watch when you made a mistake and you were still able to fix it and win the fight.

Sherdog.com: How did your career change after you defeated Torres and Nam in back-to-back bouts?
Moraes: It changed everything, but the most important thing for me was that I could prove to the world who I am.

Sherdog.com: What kind of impact did growing up in Brazil have on your life and career?
Moraes: I am from a poor neighborhood and family. Everything was hard for me, but my parents were hard workers, and for me, it was very important because they were able to feed me well and give me a good education. They set a great example for me, and they are my inspiration. I’ve had many big challenges in my life. I watched my parents trying to find a way to make money to support me while I was just a little kid and couldn’t do anything. It caused a lot discussion between them; financial problems are tough on relationships, but thank God they were able to work through it and are still together. I’m so thankful to God because now I am able to help them out a little bit.

Sherdog.com: What challenges does Carson Beebe pose as an opponent?
Moraes: He is a tough guy with a great wrestling background. He’s been fighting good fighters recently, but I’m ready for this. Big challenges like this are what make big fighters, and this is where I want to be.

Sherdog.com: What do you enjoy more: the knockout or the submission?
The knockout ... I’m a striker and I’m so proud to carry that flag. 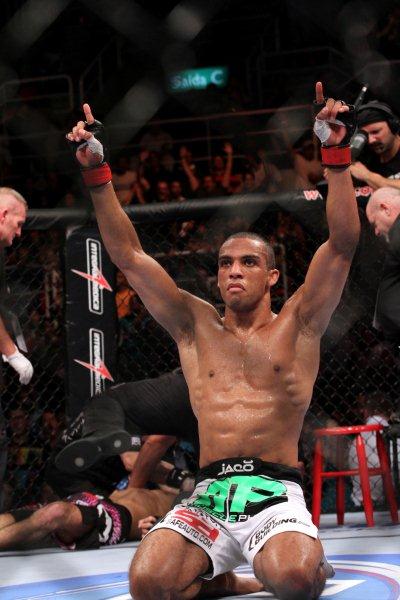 Photo: Sherdog.com
Barboza remains an influence.
Sherdog.com: Outside of your family, who has had the greatest impact on your career as a fighter?
Moraes: I have been following Edson Barboza and my coach, Anderson Franca, since I was 9. They are great fighters and people. It is very important to be a fighter inside and outside the cage. Your cagefighting days will all pass, but your legacy will stay forever.

Sherdog.com: You were 6-4-1 through your first 11 fights. When did you know you could be a championship-caliber fighter in MMA?
Moraes: After my third loss, I felt so bad because I didn’t perform the way I knew I could. Luckily, I have great friends and training partners around me that pushed me to train harder for my next fight. I fought great but still ended up with another loss against a tough guy. I was beating him badly, but I made a mistake and it cost me the fight. Even though I lost, I proved to myself that I was capable of a much better performance, and mentally, it put me back on the right path toward a championship. After that, each day I focused on learning and gave my best in all of my following fights. The wins started coming, and I’m happy and thankful to God.

Sherdog.com: What motivates you?
Moraes: I want to fight with the best guys in the world. I have my family to support, and every moment that I step in the cage, I have my real friends and my city, Nova Friburgo, with me. I know each punch that I throw, they will hit with me, and if my opponent hits me, they will feel the same pain.

Sherdog.com: If you were writing the script, where would you be a year from now?
Moraes: I would love to become the first WSOF champion at 135 pounds. I just want to fight the best competition in the world and fight on big shows.