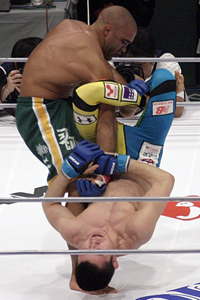 Stephen Martinez/Sherdog.com
Without a doubt, Todd Moore will
have his hands full with Japanese
star Shinya Aoki.
The Undercard

The bottom line: The late notice special on this card, Moore enters the bout off two straight losses and will be in over his head against Aoki, who can beat almost anyone with his preternatural jiu-jitsu alone.

Watch for Aoki to pull guard early, with Moore trying to make sense of the tangled mess of limbs that will quickly envelop him.

The bottom line: One of the real slobber knockers on this card, Sakurai and Hironaka will look to establish themselves in Dream’s nascent welterweight division.

While Hironaka may be known for versatility, he has drawn an opponent who practically wrote the book on MMA multitasking. Sakurai edges Hironaka in every facet of the game. Considering Hironaka’s Don Quixote level foolishness when it comes to slugging it out on the feet, Sakurai should have no problem picking apart his quarry and scoring a tidy knockout.

The bottom line: The proverbial bone being thrown to the casual Japanese MMA fan, this matchup gives us faded Pancrase legend Masakatsu Funaki colliding with fighter/superhero/puroresu superstar Minowa in a bout that could only happen in the same country where Bob Sapp became a pop culture phenomenon.

As for the fight itself, Funaki is pushing 40 and has not won a fight in nearly a decade. While Minowa is hardly a titan in the sport, he is at least physically and fundamentally capable -- something that cannot be said for Funaki, who will get pounded out in short order.

The bottom line: The sole featherweight scrap of the evening is also one of the most interesting bouts on the card, as janitor turned pulp hero Tokoro takes on one of his toughest tests yet in rugged wrestler Yamamoto.

As much as Tokoro’s story of redemption may pull the heart strings, Yamamoto will be pounding Tokoro’s brain cells, as his wrestling and striking ability will thwart Tokoro’s submission-or-bust style. 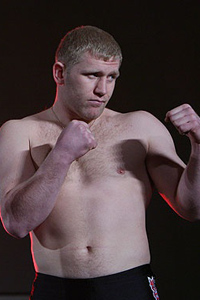 The bottom line: Nothing says MMA quite like a Russian soldier taking on an American super heavyweight on short notice

A late injury substitution for the unbeaten Siala “Mighty Mo” Siliga, Ambriz may be a lamb being led to slaughter. Kharitonov’s huge edge in big-fight experience, coupled with his ground savvy, make him a prohibitive favorite in his first bout in more than a year.

The bottom line: UFC veteran Nakamura tackles Brazilian prospect Martins in a bout that is critical for both men in Dream’s wildly competitive lightweight division.

What makes this fight a tough call is Nakamura’s apparent inability to grasp the basics of weight cutting; his lightweight bout against Robert Emerson at UFC 81 saw him enter the cage in a state that can best be described as borderline emaciated. If that mistake is repeated, Nakamura will be in for another long night. At the same time, if he learned his lesson, his grappling should carry the day.

The bottom line: Everyone’s favorite indomitable Judoka makes his return against the latest kyokushin disciple to hit the MMA scene, as Yoon takes on yet another talented striker in Nakahara.

The sight of Nakahara nearly taking off Kazushi Sakuraba’s head with a kick remains fresh in the mind of many. His lacking ground game, however, puts him in a deep hole against Yoon, who can absorb a beating like few others and still manage to secure the takedown he needs to pull off a submission. Expect more of the same.