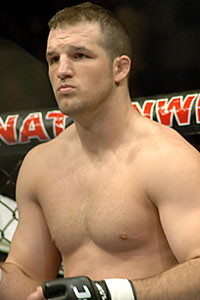 Photo by Sherdog.com
Look for Matt Hamill
to sprawl-and-brawl
his way to a win.
Matt Hamill vs. Reese Andy

The stakes: After taking his first decisive loss as a professional in his UFC 88 bout with Rich Franklin, Hamill now finds his spot in the light heavyweight division in danger; his demotion to undercard status surely cannot be the UFC’s idea of a Christmas gift. If Hamill’s going to rediscover his “mojo,” he needs to start by proving he’s a cut above the division’s myriad of gatekeepers.

The breakdown: In a clash of wrestlers like this, it often comes down to who can show the most offensive diversity. Hamill may not be Ernesto Hoost when it comes to aesthetically pleasing striking, but he’s rugged like Paul Bunyan when it comes to up-close mauling. That’s not the kind of fight Andy’s looking for, and if Hamill can force it upon him, he’ll have another overmatched opponent ready for the Timothy Treadwell treatment.

The stakes: Just one of several IFL castaways trying to find his footing in the granddaddy of pugilistic promotions, Andy got off on the wrong foot with a blasé showing against an equally lethargic Brandon Vera at UFC Fight Night 14. Another fight like that, and Andy will join a long list of IFL veterans who could not hack it in the UFC.

The breakdown: This fight comes down to whether or not Andy can outwrestle Hamill and actually maintain the top control he so frequently lost in his bout with Vera. If Andy fails in that regard, he’ll end up being Hamill’s personal bobblehead. Should he manage to score the takedowns that eluded him in his debut, watch for Hamill’s lacking jiu-jitsu skills to be summarily exposed.

* * *
The bottom line: Watching Andy’s fight with Vera should not fill any of his fans with hope, as both his takedowns and control were completely lacking. What’s even more worrisome is Andy’s striking, which normally consists of throwing the occasional telegraphed punch that whiffs more often than Ryan Howard. Watch for that flaw to sound Andy’s death knell in the UFC, as Hamill executes a sprawl-and-brawl gameplan en route to a dominating TKO victory.
SHARE ON FACEBOOK SHARE ON TWITTER
Related Articles
Latest News
+ VIEW MORE