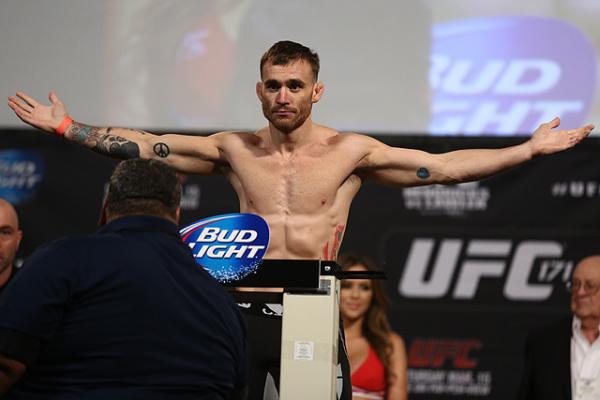 Robert Whiteford has lost just once in his last 13 appearances. | Photo: Dave Mandel/Sherdog.com


Scotsman Robert Whiteford made waves when the Ultimate Fighting Championship touched down in his homeland for the first time, as he knocked out Paul Redmond with a left hook and follow-up ground strikes at UFC Fight Night “Bisping vs. Leites” on July 18.

The American Top Team-trained Whiteford has now won 12 of his past 13 bouts, with his only defeat coming in a short-notice UFC debut against Jim Hettes a little less than two years ago. He has since rebounded, having toppled Redmond and former Legacy Fighting Championship titleholder Daniel Pineda.

In this exclusive interview with Sherdog.com and MMAViking.com's Ryan O'Leary, the 32-year-old looks back on his victory in Scotland, discusses training abroad and reveals his desire to fight at the upcoming UFC Fight Night event in Dublin on Oct. 24:

Sherdog.com: You waited and waited to sign with the UFC. Did you ever think you would not get the call?
Whiteford: I always knew that I’d make the UFC. People would say to me, “If I make the UFC …” and I would reply, “When I make it.” It is my destiny to fight, and I’m only getting warmed up.

Sherdog.com: How did it feel to fight again after being sidelined with injuries for more than a year?
Whiteford: It felt great to get back into the cage. It’s been far too long. The injury I had was pretty bad, but I used that time to work on other aspects of my game. My boxing and footwork improved tenfold, and I felt ready stepping into the cage in Glasgow.

Sherdog.com: Why do you choose to train at American Top Team rather than staying in Scotland?
Whiteford: I train with the best team in the world. That’s the answer. I still train in my home village of Fauldhouse with my boxing coach Colin McNeil and long-time sparring partner Kev Brooks when I’m back in Scotland and also at the Griphouse in Glasgow, but ATT is a different level. Other fighters don’t understand that and never will until they experience it for themselves.

Sherdog.com: What do you like to do outside of the cage?
Whiteford: I chill with my cat, Ollie, and my girlfriend in Scotland, who recently I proposed to, so life’s pretty good. I always watch the UFC, which is every week, and I train as a lifestyle choice, so my life doesn’t change much from when I have a fight and I don’t.

Sherdog.com: What motivates you?
Whiteford: I often say this to people: You are a fighter or not from an early age. There are lots of martial artists out there, and some are very good and effective at what they do, but not everyone is a fighter. I knew from an early age that I was a fighter, and I haven’t lost that. I fight every day to improve myself, because it is who I am and who I must be. It’s in me. You can’t train that -- never.

Sherdog.com: How did it feel to have fought and won at home at the UFC event in Glasgow?
Whiteford: It was a dream come true. I always knew the UFC would come to Scotland at some point. I just didn’t know when it would be. We are a fighting nation, and when I walked out, 11,000 Scots showed the world how loud they could be. It was a truly special moment, and I couldn’t help but get engaged in it. I usually have no emotion, but the UFC in Scotland moved me.

Sherdog.com: What are your goals moving forward?
Whiteford: I didn’t come here to be average. I play to win, and I train hard to make that happen. Let’s see what the next 12 months has in store. That’s all I’m saying.

Sherdog.com: When do you want to get back in the Octagon?
Whiteford: I’m ready and wanting to fight ASAP. I want to stay active and move up the rankings. Put me on the Dublin card [in October], and I’ll take the roof off that place, as well.

Sherdog.com: You have been calling out Dennis Siver, whom you were once scheduled to fight. Why do you want this matchup?
Whiteford: Unfinished business. Dennis has been on the scene for a long time and I don’t take him lightly, but it’s time for me to clear up in everyone’s mind what would have happened if the fight had gone ahead in Stockholm [last October].