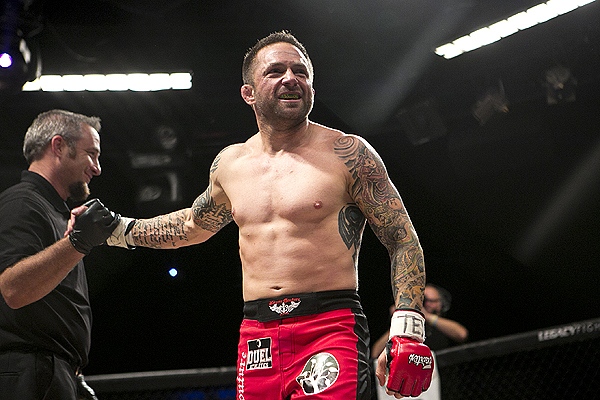 
Once a soldier, always a soldier.

As he approaches his promotional debut against the unbeaten Andrew Yates at World Series of Fighting 6 -- the event’s prelims will stream live and free to Sherdog.com -- on Saturday at the Bank United Center in Coral Gables, Fla., Chad Robichaux has a particular mission on his mind. The 38-year-old wants to establish his name on a larger platform in order to use his success to benefit America’s military veterans. That pursuit brought him to the World Series of Fighting.

“It is not about me getting myself out there as much as getting what I believe in [out there],” Robichaux said. “This sport has been awesome to me and I love my supporters and fans, so if I can share who I am and what I believe in from the mountaintops, then I will seek the highest one; and right now, that is WSOF. With 22 suicides a day and a 90-percent divorce rate among our veterans, somebody needs to be on a platform. Why not me?

After Robichaux discussed the difficulty of finding a “good fight” in a June interview, Legacy Fighting Championship promoter Mick Maynard countered with the claim that he had offered “Robo” several top-level opponents, including World Extreme Cagefighting and Ultimate Fighting Championship veteran Damacio Page. However, Robichaux had already started the process of moving to the World Series of Fighting.

“I really enjoyed my time at Legacy FC,” he said. “I was their first bantamweight champion, and that holds a very special place in my history. Legacy has hit a global level, and that is so cool. For me, I still had that feel that the Legacy show is the local scene; that’s not the case, but since the show is [promoted] where I live, I felt that.

“As a competitor I always want to reach the highest level, and going beyond Legacy was a goal of mine,” Robichaux added. “As for Damacio, man, I want to fight the best, and he is one of them. What a great offer to fight him. The timing was bad, though. I was already in negotiations with WSOF, and they offered twice the pay and a bigger platform on [the] NBC [Sports network].” File Photo
Yates is 7-0.
Yates, his first WSOF foe, is younger by 14 years and only has seven professional bouts on his resume, but he is far from inexperienced. Undefeated as a pro, he trains with Wanderlei Silva’s Wand Fight Team and has 26 amateur fights under his belt. However, Robichaux feels confident he can control the outcome.

“I don’t know a lot about him as a fighter, so we decided just to train for what I’m best at: a heart-exploding pace and violent pressure wherever the fight takes place,” he said. “I’m an aggressive fighter and am always trying to finish from bell to bell. I don’t fight to impress judges; I fight to be exciting and to win. For me to win means to finish the fight, so expect me to give 120 percent in every area of the bout.

“With Andrew, I do believe he will be well-rounded; he has wrestling, good striking and is a solid athlete, but I think I will dictate where the fight takes place at all times, and that is my biggest advantage,” Robichaux added. “I think his biggest strength is that he really believes in himself. I think that is cool. He seems like a great young man, and it will be an honor to welcome him to the big leagues.”

Robichaux -- who holds a second-degree black belt in Brazilian jiu-jitsu under Vinicius “Draculino” Magalhaes and Carlos Gracie Jr., along with black belts in traditional jiu-jitsu, American jiu-jitsu and Okinawan karate -- has spent several training camps with an Xtreme Couture affiliate in Colorado. However, he has honed his skills under Magalhaes, muay Thai coach Matt Wald and wrestling coach Jody Tranthom since moving back to Texas.

“We have an awesome team and have always had a high win ratio,” Robichaux said. “I think our work ethic and the way we get behind each other’s bouts are the key. We train harder than any place I’ve ever trained in the world.”

His return to Texas afforded him the chance to be more closely involved with the Mighty Oaks Foundation, an organization he started, along with Operation Warrior Reconnect, in an effort to combat Post-Traumatic Stress Disorder in veterans.

“We use BJJ and MMA to work with veterans struggling with PTSD, which includes a Gracie Barra-sponsored vocational program for job placement as school program directors,” Robichaux said. “In addition to that, we have ranches in Colorado, California, Texas and Oklahoma, where we bring [in] veteran and active-duty combat veterans, spouses and family members for a series of week-long mentorship camps.

“The camps focus on overcoming PTSD and helping them to successfully reintegrate into the communities they fought to defend,” he added. “We have had about 1,500 graduates and have had zero suicides or divorces, to our knowledge -- a 100-percent success rate we are very proud of. We’ve earned the trust of the United States military, and [veterans] are now sent to us on orders from the U.S. Marines and U.S. Army.”

Before signing with the World Series of Fighting, Robichaux made a push to be included on the Ultimate Fighting Championship’s roster for UFC Fight Night 31 “Fight for the Troops 3” on Nov. 6.

“We did try, desperately,” he said. “The fans really pushed for Colton Smith, Tim Kennedy and myself to get on [the card]; Colton and Tim did, but I didn’t. It was a bummer, but I’m happy those two are on the card and representing war fighters in the cage. I think, regarding veteran fan bases, we are the top three fighters. I speak on bases and with troops for a living; it’s my job.”

Robichaux sounds like a man who is content to ply his trade inside the World Series of Fighting.

“I’m very happy with them; they are incredible, and I’ve never been so excited to be with an organization before,” he said. “However, for any fighter to say they don’t want to fight in the UFC, I think, would be lying. Of course it’s a goal and a dream that I think I’ve been overlooked on for a long time. However, right now, I am very blessed with the opportunity I have.”