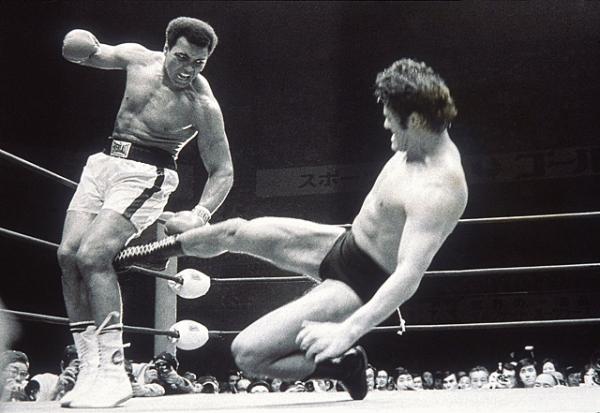 
Ten years after his New Year’s Eve MMA event at Kobe Wing Stadium tanked in the Nippon TV ratings, Antonio Inoki’s future as a promoter in Japan looked bleak. His original pro-wrestling organization, New Japan Pro-Wrestling, was about to be sold to videogame company Yukes. Inoki signed a deal to remain a face -- a character for themed events. However, his days as a promoter appeared to be numbered. Relegated to being a pitchman and a celebrity, Inoki tried to find ways to stay relevant in the fight scene.

Then everything imploded. The promoter for the Inoki Bom-Ba-Ye 2003 show, an admitted yakuza fixer named Seiya Kawamata, cooperated in a negative media campaign against Pride Fighting Championships in the weekly magazine Shukan Gendai. Pride soon collapsed, leaving K-1 as the major player in town, and Inoki always had good relations with K-1 boss Kazuyoshi Ishii.

The unthinkable then happened. K-1 collapsed, and suddenly, there was a power vacuum in the national Japanese combat sports landscape. Who would take over the new-found tradition of MMA on New Year’s Eve television? For a while, it appeared nobody would. The TV networks, not wanting to deal with any more fight scandals, washed their hands of putting up cash to promote fight events despite the great ratings. The biggest and baddest Japanese MMA shows were high-risk, high-stakes, high-reward kinds of affairs.

When scandals burned the major broadcast networks, they became reticent in funding future events. However, it did not mean they were unreceptive to doing business, as long as they did not have a major financial and political risk in the proceedings. With Pride and K-1 dead, someone had to step in. Leave it to the old warhorse, Inoki, to try to find a way to get back into the MMA picture.

When the founder of New Japan Pro-Wrestling made the decision to go head-first into blurring the lines between wrestling and mixed martial arts, he built a business philosophy based on fantasy fights and “dojo pro-wrestling.” After all, many of the old-school Japanese wrestlers would often have fights with each other in practice to see who the toughest guy really was. There was not a focus on tape study, and it was not about the money; it was about separating the men from the boys.

Inoki was masterful at placing characters like Willie Williams, Karl Gotch, Billy Robinson and Muhammad Ali into the mix for fights where the audience was never sure what was going to happen. Even the participants involved did not always anticipate what was going to change at the last minute. This made Inoki a legend in Japan on primetime television.

When traditional pro-wrestling boomed in the early 1990s, Inoki still had a place but more as a legendary figure than anything else. His obsession with keeping alive the image of Rikidozan, the Godfather of Japanese Pro-Wrestling, was paramount to anything else. Inoki was one of Rikidozan’s two famous protégés. The other was Giant Baba, Inoki’s rival with All Japan Pro-Wrestling. Baba had Rikidozan’s two sons on his side. Inoki, wanting to maintain his legacy connection with Rikidozan, decided to go all-in with his connection to North Korea. As one might imagine, this was extremely controversial.

Inoki became a politician because of his fame as a professional wrestler. He always had a fascination with promoting world peace while negotiating with dictators and terrorists like Saddam Hussein. This paradox always fascinated the Japanese public. When it came to dealing with the North Koreans, Inoki found himself trying to balance the image of Rikidozan with the cultural issues regarding zainichi, or Japanese residents with Korean blood. For modern MMA fans, fighters like Yoshihiro Akiyama were symbols of the still-tense emotions that native Japanese residents have with zainichi; they were easy to stereotype and easy to turn into villains. Plus, many yakuza gangsters were zainichi, and dark money flowed between Korea and Japan.

Inoki’s grand plan was to build a bridge with North Korea’s dictatorship by bringing events to Pyongyang. In 1995, New Japan held a two-day wrestling summit in front of more than 170,000 spectators. Inoki beat American legend Ric Flair in the main event. The North Koreans were not sure what to make of pro-wrestling, but it fascinated them because of the Rikidozan connection.

This connection remains in play in 2014, albeit with a much different twist. Inoki is back in Japanese politics. As one might imagine, the North Korean regime is not very popular with the public right now given its nuclear capabilities and the leadership of Kim Jong-Un. Yet Inoki remains undeterred in pushing the spirit of Rikidozan in the fight scene. The Godfather seems to be beloved by everyone, and Rikidozan was one of the most successful symbols of Japan’s post-war Reconstruction period.

The extent of Inoki’s current ties with North Korea's current regime is unknown, but there clearly does seem to be a line of communication. That means political power, and for Inoki, political power means business power.

Under the banner of the Inoki Genome Federation, he promotes some wrestling matches, some MMA fights and some bizarre spectacles that combine the two. His main star right now is Satoshi Ishii, the beleaguered 2008 Olympic gold medalist judoka who is just now finding his groove as a Japanese star. After fighting all over the world, Ishii settled in Los Angeles and married. Nine months later, he divorced, only to marry again in a high-profile setting. Ishii is the number one heavyweight prospect with which Inoki and his associates have business ties. He does not need to fight in the Ultimate Fighting Championship to build upon his drawing power in Japan.

Ishii will defend his IGF MMA title against UFC castaway Philip De Fries on April 5 at Ryogoku Kokugikan in Tokyo. Meanwhile, Ikuhisa Minowa, the grizzled veteran with more than 100 fights to his credit, will face Sweden’s Goran Olle Ulf. “Minowaman” is coming off of a victory over Atsushi Sawada on New Year’s Eve.

It looks to be a productive calendar year for Inoki events in Japan, with shows on July 13 at Fukouka International Center in Fukouka, Oct. 13 at Aichi Prefectural Gym in Nagoya and the year-end show on New Year’s Eve at Ryogoku Kokugikan. There will also be an August event in Tokyo. These are respectably big venues at which to run shows in Japan.

Inoki’s grand plan is to keep the lines of communication open with networks like Fuji TV, which enjoyed success with Pride. By staying active and promoting big fights in 2014, the goal is to attract major-league sponsorship and turn it into television backing for events that could air in “golden time” in Japan. The UFC does not appear to have a significant presence in Japan at this point, leaving the door wide open for Inoki to make a run as a national player.

Many have lost fortunes giving up on Inoki’s resilience. He started the New Year’s Eve tradition in Japan by bringing Pride and K-1 together and believes that he is a player as long as he is in the game. Right now, IGF is the only game in town when it comes to having the cash to promote major Japanese MMA fights.