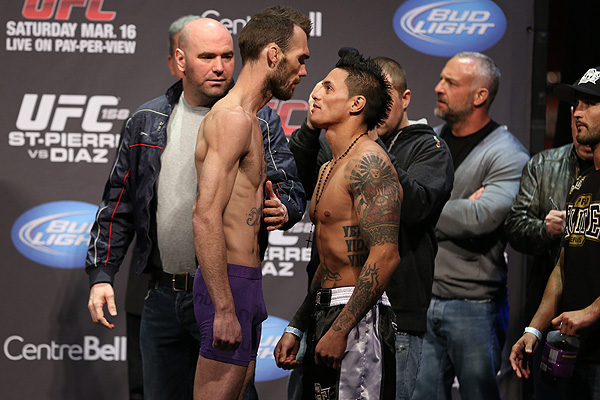 George Roop improved to 3-5 in the UFC. | Photo: Dave Mandel/Sherdog.com


George Roop entered his bantamweight battle with Reuben Duran on the UFC 158 “St. Pierre vs. Diaz” undercard searching for some consistency on Saturday at the Bell Centre in Montreal.

Roop was on the hook for back-to-back losses, having found himself on the wrong side of a controversial decision against Hatsu Hioki at UFC 137 before suffering a second-round technical knockout defeat to Cub Swanson at UFC on Fox 2 in January 2012.

After six bouts as a featherweight, Roop returned to 135 pounds to face Duran. He checked into the cage as a slight underdog at +115 to Duran’s -145, according to BetDSI.com. Would we see the Roop who demolished Chan Sung Jung with a second-round head kick and ripped through Josh Grispi or the one who succumbed to strikes against Swanson and Mark Hominick?

Duran, meanwhile, made his UFC debut on short notice, ultimately losing a decision to Takeya Mizugaki. He then rebounded to finish Francisco Rivera with a third-round rear-naked choke at “The Ultimate Fighter 13” Finale in June, earning “Submission of the Night” honors. However, he followed up the victory with a first-round knockout loss to Hugo Viana six months later.

Roop outpointed the Pinnacle MMA representative by utilizing his reach advantage, solid work in the clinch, knees and short punches. He also fished for submissions, including guillotine and rear-naked chokes in the second round, ultimately carrying a unanimous decision on the scorecards: 29-28, 29-28 and 30-27.

Meanwhile, the middleweight scrap between Chris Camozzi and Nick Ring was even closer than Roop-Duran as far as the odds were concerned. Camozzi was a +105 underdog, Ring a -135 favorite.

“The Ultimate Fighter” Season 11 alums were looking to build on wins in their previous fights. Camozzi’s clean striking kept Ring backpedaling as he worked from the outside, taking advantage of the Canadian’s low hands and exposed chin. Conditioning was also a factor. The two middleweights slowed considerably as the fight wore on, but Camozzi got the better of the later exchanges, as he moved forward and kept Ring on the defensive.

Camozzi edged Ring by split decision. All three judges scored the fight 29-28, two of them in Camozzi’s favor.

Ring was effective with jabs and kicks in an attempt to wear down his opponent, but Camozzi pressed forward with knees, jabs and crosses. While Ring attempted more punches, they did not land as cleanly as Camozzi’s crisp strikes.

The win was Camozzi’s fourth straight, as he had previously turned away Dustin Jacoby, Nick Catone and Luiz Cane. Ring owns a 1-2 mark in his last three appearances, having sandwiched a decision victory over “The Ultimate Fighter” Season 11 winner Court McGee between losses to Camozzi and Tim Boetsch.