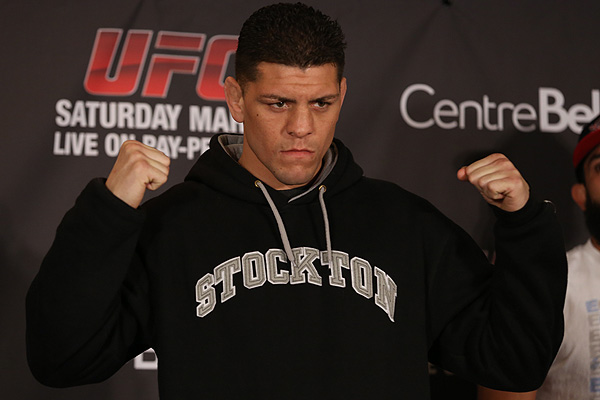 
In the end, Nick Diaz was selling us wolf tickets all along.

The Stockton, Calif., native was the unofficial master of ceremonies in the days leading up to UFC 158, holding court with MMA media thanks to rambling diatribes that often switched direction faster than Allen Iverson could cross up hapless defenders in his prime.

Even at the post-fight press conference, Diaz -- who showed up 30-35 minutes late after telling UFC President Dana White he was going to pass on the engagement because his work was done -- dominated the microphone upon his arrival; all of this despite having taken a relatively one-sided and predictable beating at the hands of Georges St. Pierre in the Octagon at the Bell Centre in Montreal on Saturday. Ardent followers of the sport knew all along this was the most likely outcome. If Carlos Condit, a diverse and mobile striker, could not dethrone the welterweight king, what made Diaz, a boxing-centric fighter with similar wrestling deficiencies to Condit, the right man for the job?

Complain about St. Pierre’s style if you will -- seven of his last eight title defenses have gone the distance -- but it is undeniably effective. In addition to dictating the tempo of the fight through his MMA-tailored wrestling, St. Pierre outstruck Diaz most everywhere the fight went: 62 to 24 at distance and 129 to 24 on the ground, according to FightMetric.com. Diaz did hold a 32-19 edge in the clinch, but those moments ultimately had little impact on the result of the bout.

“I didn’t want to fight in boxing range with him because he’s the best boxer in MMA, and his jiu-jitsu is amazing,” said St. Pierre. “He has a very unusual scrambling style that I don’t usually see. I don’t have training partners like that. It’s very hard to fight a guy like him. When you fight a guy like this, it’s almost impossible to get ready for that.”

The always gracious French-Canadian was almost too kind in his assessment of the matchup. No amount of insults, cheap shots or taunts was truly going to alter the trajectory of the UFC 158 headliner. St. Pierre might have appeared flustered trading banter with Diaz to fulfill media obligations, but he was absolutely clinical on fight night. Whether it has been wrestlers, boxers, kickboxers or just plain all-rounders, GSP almost always delivers. Of course, Diaz was not impressed.

“I think I can stop the takedowns and beat him. I’m not hurt. He hits like a woman. He hits like a girl because he’s too scared to let go to get a real punch in,” Diaz said on Fuel TV.

You will have to forgive the ongoing fascination with Diaz. The often reclusive former Strikeforce champion was practically a social butterfly for the past two weeks. After a year-long hiatus in which Diaz’s legal team often served as his mouthpiece in the wake of his positive test for marijuana metabolites following UFC 143, it was interesting to hear his thoughts, however uniformed and outlandish they might have been.

When Diaz talks, sometimes you cringe. Sometimes you scratch your head. Sometimes you laugh. But as he proved this week, you always listen. That was how the Cesar Gracie protégé got to this point in the first place. By constantly taunting and prodding the champion, Diaz received a title shot even though he was coming off of a loss and a year-long suspension. St. Pierre wanted the fight, and it seemed that a fair number of the pay-per-view buying public agreed with him.

In the name of entertainment, Diaz bypassed rightful No. 1 contender Johny Hendricks, and to his credit he was more than entertaining -- at least until the opening bell sounded. While St. Pierre’s approach has become tedious to more than a few fans outside of Canada, Diaz deserves the lion’s -- or perhaps wolf’s -- share of the blame for allowing “Rush” to consistently impose his will. Diaz did yeoman’s work selling the fight, but he never fully bought in once the Octagon doors closed.

There were plenty of excuses after the fact: a lackluster first two rounds, not enough quality guys in camp, suspicious hand wraps, a difficult sleep schedule, etc. Chalk it up to another case of Nick Diaz simply being Nick Diaz. As it was when the same phrase used to be applied to eccentric former Major League Baseball star Manny Ramirez, it is not meant to be complimentary.

Diaz’s routine can be somewhat endearing when he is winning, and his devoted supporters will claim that he always “keeps it real.” Even that assertion is erroneous, however.

If he cannot get the St. Pierre rematch or super fight against Anderson Silva for which he was angling after Saturday’s loss, Diaz claims he is going to call it a career.

“I think I’m going to have to figure out whether I want to keep doing this,” he said. “To be honest, I really don’t think I’ve got anymore. I think I’m done with mixed martial arts. I want to help my team, and I’m tired of getting banged up like this. I’ve been thinking this through for a while now, and I’ve been wanting to get out of this thing for long enough.”

Diaz made a similar threat following his loss to Condit, which only held up until his Nevada Athletic Commission-imposed suspension concluded and he was granted his desired showdown with St. Pierre. Doing the same thing again makes Diaz seem at best disingenuous, and at worst, childish.

With his aggressive pre-fight bluster, Diaz sold more than his share of wolf tickets to UFC 158. At the end of the night, he was merely “The Boy Who Cried Wolf.” If and when he decides to take the next step in his career, there might just be a few less people listening.