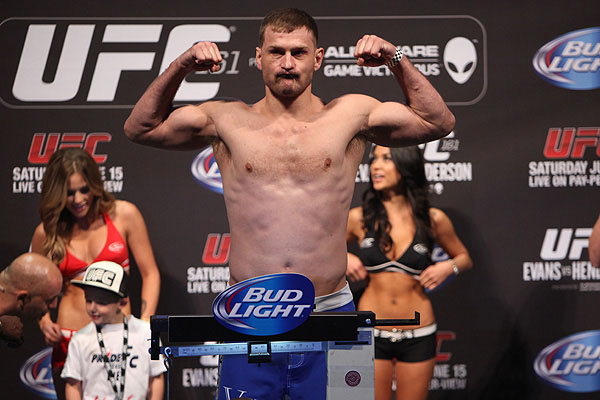 Stipe Miocic pulled the rug out from under one of the UFC 161 favorites. | Photo: TJ De Santis


UFC 161 “Evans vs. Henderson” on Saturday at the MTS Centre in Winnipeg, Manitoba, Canada, was in many ways the polar opposite of its predecessor.

The 12-bout UFC on Fuel TV 10 lineup on June 8 resulted in 12 finishes and only two upsets, while UFC 161 featured only two stoppages but a total of five upsets in the Great White North.

In the co-main event, “The Ultimate Fighter” Season 10 winner Roy Nelson provided some star power and stepped in as a replacement for Soa Palelei just seven weeks after his victory over Cheick Kongo netted him the fourth “Knockout of the Night” bonus of his career. Although it seemed like a good idea at the time, Nelson took a one-sided beatdown from Stipe Miocic, a former Golden Gloves winner, in perhaps the most surprising upset of the night.

Nelson (-285) showcased few of his skills outside of his ability to absorb punishment, while Miocic (+225) came through with the most significant performance of his career. The once-beaten Ohioan now assumes a place of relevance at the heavyweight table.

However, Shields (+190), delivered some knees and kicks of his own and largely neutralized the two-time NCAA All-American wrestler in the clinch.

Another favorite met a far more decisive end. Sam Stout had a rough time, as he was the only Canadian to lose on his home turf. James Krause (+232) earned $100,000 in bonuses -- $50,000 for “Submission of the Night” and $50,000 for “Fight of the Night” -- in securing the upset. Krause, who replaced the injured Isaac Vallie-Flagg, bloodied Stout (-292) with a first-round head kick, utilized his jab and eventually submitted the Canadian with a guillotine choke late in the third frame.

Few expected much out of Mitch Clarke (+200) after he lost his first two Ultimate Fighting Championship bouts, but that did not stop him from spoiling the lightweight debut of Englishman John Maguire (-250). Clarke turned to leg kicks, elbows, a few attempted kimuras and a fast pace to keep the Tsunami Gym representative at bay.

Finally, welterweight Sean Pierson ran his current winning streak to three fights with his majority decision over Kenny Robertson. Pierson (+117) put two rounds in the bank and then held off a late surge over the final five minutes. Robertson (-147), a late replacement for the injured T.J. Waldburger, outstruck Pierson 83-2 in the third round, according to FightMetric figures.