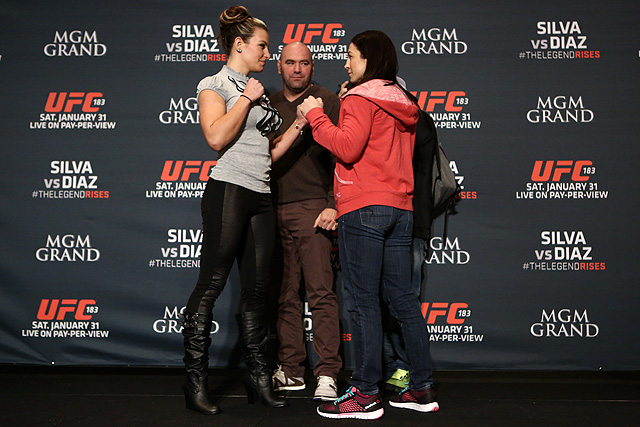 
Lack of faith from the oddsmakers did not dissuade Miesha Tate.

The former Strikeforce women’s bantamweight champion handled her business at UFC 183 on Saturday at the MGM Grand Garden Arena, as she took a majority decision from 2004 Olympic silver medalist Sara McMann as a +159 underdog. Two of the three judges cast scorecards in Tate’s favor, 29-28 and 29-27, while a third scored it a 28-28 draw.

McMann (-185) showcased improved striking skills in the first round, as she nearly finished the fight with a crushing right hand -- the blow fractured Tate’s orbital bone in two places -- and follow-up ground-and-pound. However, Tate answered a takedown attempt with a tight guillotine choke in the second and then worked some stifling top control in the third. After 15 minutes, the decision was hers.

As she recovers from injury, Tate will next turn her attention to the UFC 184 main event, which features women’s bantamweight titleholder Ronda Rousey and undefeated challenger Cat Zingano. Tate, who desires another crack at the 135-pound gold, has lost to both women, Rousey on two occasions.

“I suppose it depends who wins,” Tate said at the post-fight press conference. “If it’s Ronda, obviously I think I have a little bit more work to do. If it’s Cat, I think a better argument can be made [for a rematch]. We’ll see who wins out of those two, but I’ve already told everyone that I’m willing to do what it takes to get back to [another title shot].

Meanwhile, John Lineker (+180) had an easier time handling Team Oyama’s Ian McCall (-215) than he did with the scale. The Brazilian entered the match four pounds overweight and has now missed weight four times since arriving in the Ultimate Fighting Championship -- a development that prompted UFC brass to force his move to 135 pounds for his next fight.

McCall was the superior fighter in the first round, as he landed a few kicks, a double-leg takedown and short punches and elbows to Lineker’s body and head. The second and third frames were all Lineker: He turned the tide with an attempted guillotine choke and then went to his striking combinations, brutalizing “Uncle Creepy” with heavy left hooks and a thunderous right hand. All three judges scored it 29-28 for Lineker. Next stop for the former Jungle Fight champion: 135 pounds.

Finally, Jordan Mein stepped into the cage as a slight -140 favorite against Thiago Alves (+120). The Canadian enjoyed a dominant first round, where he tested the American Top Team fighter’s chin with standing elbows, crisp kicks and punching flurries. Alves rallied in round two, as he short circuited Mein with a body kick and finished him with subsequent punches.

“The first round: It took me a little bit to get warmed up,” Alve said. “In the second round, my coach told me, ‘Just go out there, and you’re going to have to make it a dirty fight. You’ve got to take the fight to him.’ That’s what I did.”