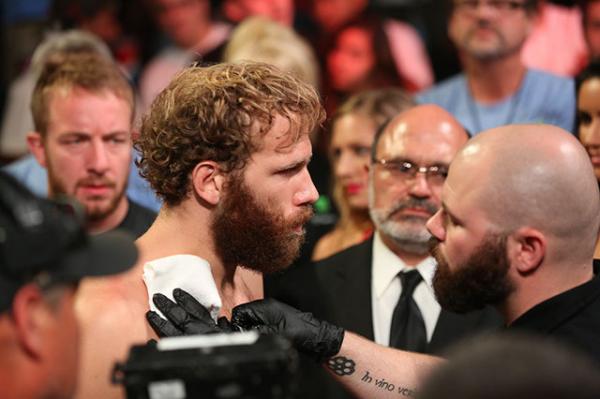 David “The Caveman” Rickels owns an 8-2 mark in Bellator. | Photo: Will Fox/Sherdog.com


Bellator MMA is back for another exciting episode of “Blood and Boardshorts” on Spike TV. This week, the Viacom-owned promotion visits the Kansas Star Casino in Wichita, Kan., for Bellator 103. The card on Friday features the Season 9 featherweight tournament semifinals and is topped by the return of former lightweight title contender David Rickels.

Here is what to watch for at Bellator 103:


I imagine it is a little bit tougher to strut to the ring chained to an inflatable velociraptor after having your nervous system involuntarily shut down in your last fight, but I hope Rickels does it anyway.

Michael Chandler wasted no time in putting “The Caveman” on ice in their July 31 encounter, brutally pounding the Season 8 tournament winner into unconsciousness in just 44 seconds. The defeat serves as the lone lightweight loss for Rickels, who dropped to 155 pounds in January and proceeded to run through the Season 8 bracket, outpointing Lloyd Woodard and Jason Fischer before stopping Saad Awad in the tournament final.

Rickels’ momentum-halting loss to Chandler also signaled the first time the 24-year-old has been finished; his only other defeat came by split decision to Karl Amoussou in the Season 6 welterweight draw. How has Rickels handled the mental side of being knocked cold for the first time ever and how will he approach his bout with 25-fight pro J.J. Ambrose?


Patricio Freire is fighting like such a Terminator these days that I would be shocked if he does not cruise through the rest of this tournament and earn himself another crack at featherweight king Pat Curran.

I write this with no disrespect intended toward Fabricio Guerreiro, but you have all seen “Pitbull” fight, and the featherweight seems be improving with just about every performance. I do not need to remind you what typically happens when Freire’s opponent elects to stand with him. Only Curran saw such a strategy pay dividends, and that was a brutal, bloody battle that could have gone either way.

While “Guerreiro” is undoubtedly a promising 23-year-old prospect, I do not think he is ready for the type of pressure that Freire will put on him. From what I have seen, it seems that da Silva has not yet learned how to maximize the benefits of his long and slender frame in the standup -- a fact that could lead to a tough night for the young gun against a hitter like Freire. 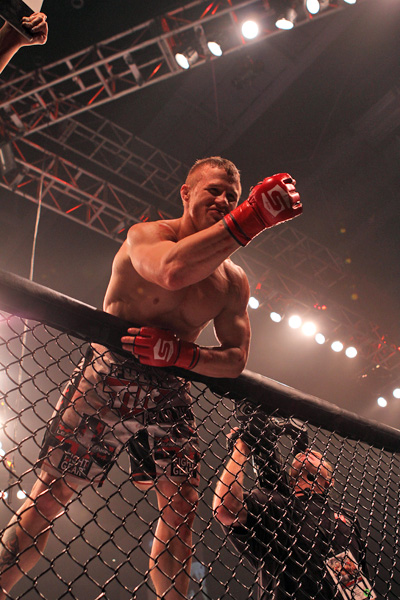 Photo: Dave Mandel/Sherdog.com
Wilcox made quite an impression.
I typically hate it when people point skyward and thank their God for powering them to victory in something as trivial as a football game or a prizefight. Are we really supposed to believe that the supposedly omnipotent spiritual force that may or may not oversee the whole of humankind has somehow found time to dedicate even the most fleeting concern to whether you or I win a ballgame?

Personally, I do not buy any of that jazz, but in the case of Justin Wilcox’s quarterfinal submission victory over Akop Stepanyan, I would not rule anything out. For all I know, Della Reese herself may have intervened in that one, because Wilcox was all but dead and buried.

With just a single leg at his disposal after Stepanyan pulverized his left calf muscle with low kicks throughout the first frame, Wilcox caught a spinning heel kick behind the ear early in round two that shook his balance. Nevertheless, the Strikeforce veteran and featherweight debutant soldiered forward, scoring a takedown and then taking Stepanyan’s back before putting him to sleep with a rear-naked choke.

“The Silverback” took that fight on just seven days’ notice and cut to featherweight for the first time in his career after spending 14 months on the sideline. I, for one, am curious to see how Wilcox performs with a full mini-camp in his pocket against the stocky, hard-swinging Joe Taimanglo.

Close But No Cigar


I have been dying to tell you guys my story about Mikhail Zayats.

In February, I had the good fortune of traveling to Salt Lake City to work Bellator 90 with the Sherdog himself, Jeff Sherwood. The show was a violent one and featured several excellent finishes, including Zayats’ first-round demolition of Jacob Noe. However, the Tennessean was not the only thing Zayats destroyed that night.

After the post-fight presser, Jeff and I ventured to the In-N-Out Burger near the venue for post-violence grub, only to find that the exact same idea had occurred to Zayats and his homies. The light heavyweight’s table had constructed a sort of Super Aggro Crag of burgers and fries, which the group proceeded to devour. Realizing that their proverbial spoils of war were suddenly lacking, one of Zayats’ buddies dutifully strutted back to the counter, apparently in order to reload.

I will never forget the look on that little dude’s face behind the register. From now on, whenever you think of Zayats, I want you to picture him crushing Noe and then doing the same thing to a pile of cheeseburgers with a proud smile across his grill. This is the true essence of sport.

Unfortunately for the Russian, his last trip inside the cage did not go as well as his visit to In-N-Out, as he was outpointed by Emanuel Newton in the Season 8 tournament finals. In my opinion, Zayats is certainly good enough to contend for Bellator’s world title, but it is still unclear if the sambo ace can find consistency against solid competition. He will have an opportunity to make a serious statement about his tournament chances when he meets Ultimate Fighting Championship veteran Aaron Rosa.


Rosa, meanwhile, has not competed since his March 2012 knockout loss to James Te Huna. As far as promotional debuts go, Zayats is certainly not the easiest fight in the world, though “Big Red” should have a decent size advantage when he meets the Russian.

The real question is whether Rosa’s technique can hold up in Bellator’s light heavyweight division, which has definitely improved over the last year with the acquisitions of Zayats, Newton, Muhammed Lawal, Quinton Jackson, Tito Ortiz and Attila Vegh. I have to wonder if Rosa would be better off fighting at heavyweight, where his durability and toughness might provide him with greater leverage against stronger but slower men.

Regardless, the 30-year-old is unlikely to be rattled heading into his Bellator debut after a three-fight Octagon stint in which he faced the virtually indestructible Joey Beltran and one of the hardest punchers on this earth in Te Huna. Can “Big Red” upset Zayats in his first Bellator foray?